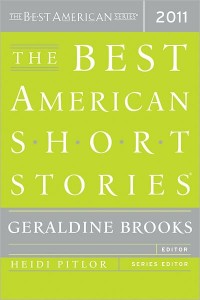 When I picked up The Best American Short Stories 2011 at Bloomsbury, a small but popular book store in my town, I was looking forward to a variegated collection filled with voices both old and new, hand-selected from the vast amount of literary journals in existence. I was disappointed to find thirty percent of the stories were from The New Yorker; Tin House and McSweeney appeared twice. Whether or not these stories are truly ‘the best’, the scope of the search was narrow. It is always easier to look at the pieces from reputable magazines, and I suspect this is what Geraldine Brooks did, than to read through the surge of new names popping up every few minutes. But this is what we must do, if we hope to discover budding talents that are still not yet broken by rules that attempt to define what a short story looks like.

Though I enjoyed many of the stories, I couldn’t help but notice their uniformity—heavily plotted with a winding middle and a few beautiful closing sentences that attempt to justify the boredom we have endured. Housewifely Arts by Megan Mayhew Bergman, for example, is about a daughter whose guilt drives her to seek out her mother’s parrot—a bird the daughter despises but which ultimately holds the last remnant of her deceased mother. Her journey down memory lane seems to me nothing but trivial, yet by the end of the story I had almost exclaimed “Wow, that was wonderful!” I later realized that my reaction was solely based on the two last sentences, which wrap up the story beautifully: “But I know the truth now. What maniacs we are—sick with love, all of us.” If we read a story only for its ending, that would have done. But for me reading, like life, is not solely about the destination but also the journey.

My favorite in this anthology is The Sleep by Caitlin Horrocks. It is narrated in the second person plural— the “we” identifies as the people of Bounty, a small town. One by one the people of the town go to sleep through the winter, letting the structure around them fall into ruin. Considering the recent bankruptcies of California’s towns and cities such as Stockton and San Bernardino, the story is more relevant than ever. Whether through economic depression or other tragedies, life is drained from these towns. Sleep, for the people of a dying town, is not too unreasonable and rather economical, and as Horrocks writes, “After the lumber, after the mines, after the railroad, after the interstate, after the crops, after the cows, after the jobs. We’re better neighbors in warm bed than we ever were awake.”

Aside from The Sleep, I have little praise. I preordered the 2012 anthology and ardently hope that it does not limit itself to publishing stories from a few prestigious magazines, neglecting the great fiction out there that would have easily taken the place of some of the stories chosen for the 2011 collection.

Abbigail N. Rosewood is a vagabond at heart, a traveler and a couch potato, a library “frequenter,” a believer of God and an agnostic. Abbigail studies Creative Writing at Southern Oregon University. Her work has appeared in “Blazevox” and “Pens on Fire”. She currently works as a fiction editor for “Femur magazine”.

“It always strikes her as a little odd, when she waits in line for coffee or stands at the bus stop.” Story of the Week (September 9), by Leigh Fisher.

The Devil's in the Remote reviews "Pretty Little Liars"