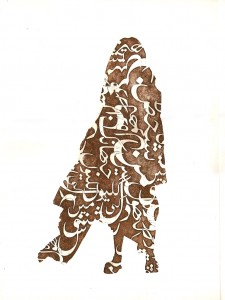 While writers themselves are usually not tied down to one, linear interpretation of these factors, they do have a major role in constructing a narrative that can influence the general perception of what these words mean and how they were significant in the context that they were meant. Although sometimes writers may deal with their personal crisis of identities and feelings of alienation, at other points they appear to have a higher calling, becoming the mouthpieces for the confusion and aimlessness of a nation or an entire generation. Writers like Ernest Hemingway, Ezra Pound and T. S. Eliot fall into the category of writers who defined the mores of their age. Their experiences of living abroad at the time of war, disillusionment and existential struggle colored their literature and also captured the general sentiment of that age.

Agents like war and colonial invasions bring with them not just physical destruction and monetary damage, they are also responsible for the disintegration of beliefs and value systems. Ideological chaos and a feeling of meaninglessness is usually a result of these agencies. However writers channel this confusion into their work leaving behind a documentation that not only gives an account of the facts, but presents an accurate portrayal of the emotional and mental anguish felt by the collective population of the period.

World War I was a war whose destruction had perhaps the most far reaching effects in history, leading to an existential crisis among people and causing them to denounce existing value systems and embrace nihilism. Gertrude Stein’s “Lost Generation” comprised of writers who came of age as World War I raged outside their windows. The phrase Ms. Stein used to describe these writers is a classic embodiment of the identity crisis a catastrophic event like war leaves in its wake. Sarah Cole in Modernism, Male Friendship and the First World War, (Cambridge University Press, 2003) says that in talking about the Lost Generation both parts of the conjunction should be considered, the word “lost” implying “alienation, solipsism, brokenness” and “generation” referring to “community, shared identity and intimacy”. For a more articulate understanding of this phenomenon she describes the experience of R. G. Dixon who speaks of this generation formed by war saying, “I have been painfully aware of how I am different from many of my compatriots. It has always been difficult for me to be wholly at home with those men who have not been through the experience of war”.

Transitioning from the ascetic Victorian and Edwardian eras into a period where the values and moral structures crucial in forming a relatable social unit had withered away, these writers had an acute sense of alienation and detachment from the regions to which they had once belonged. They sought familiarity and association in order to come to terms with the loss of their inherited values, but it was the sense of isolation and lack of a concrete identity that ultimately shaped the generation. By capturing the social mores of the rapidly changing post war world, the members of the Lost Generation were successful in constructing a coherent literary character amidst the chaos of ambiguous identities. Eliot’s Wasteland perhaps captures the essence of the aimless, unsatisfying life of this generation most accurately. He writes of the detachment an artist feels from his homeland and the shattering of his sense of belonging to the world he perceives as a wasteland. The work of these writers reflected their struggle to look for meaning and purpose in a world rocked by destruction, while revealing the changing identity structures in society including evolving gender roles and the new notions of masculinity. Hemingway’s Jack Barnes and Frederick Henry along with Lady Brett Ashley and Catherine Barkley, are all characters that symbolize the need for belonging, the meaninglessness of life and the changing gender roles of that time. The flappers of the early twentieth century, the libertines, and the excesses of alcohol, drugs and decadent parties became defining features of the early twentieth century. Writers like Fitzgerald and Hemingway, despite suffering the same alienation and isolation of the Lost Generation, gave this age such an iconic status through their literature that their identity is synonymous to the age itself.

By capturing the social mores of the rapidly changing post war world, the members of the Lost Generation were successful in constructing a coherent literary character amidst the chaos of ambiguous identities.

War symbolizes a clash of civilizations, a trait it shares with its natural counterpart – colonization which, like war, can greatly alter a nation’s understanding of both its place in the larger narrative and its collective identity. The rule of a foreign country which comes with the influx of new cultures, language, religions and value systems, can interfere with the existing constructs of identity and belonging. Writers with their heightened sensibilities often translate this invasion of identities and confusion in affiliations into their work leaving behind cannon that has a strong sense of affinity and an individual distinctiveness, collectively boxed into “post-colonial literature”.

Post-colonial literature offers a strong polemic against the oppression and exploitation of the invading country, concentrating its focus on the fallout of colonization. Due to the usurpation of an indigenous identity by the foreign presence, questions about belonging and identity often surface culminating in existential concerns (what is our new cultural identity? Where do I fit into that identity, if at all? Who pulls the strings now that X Colonizers have departed?). Of course, there are no easy answers.

“it is easier to find your way in the dark// for it is the Light that oppresses and blinds/ that sears into the soul’s tiny folds…”
Weekend poem, by Ottilie Mulzet

The Missing Slate is keeping an eye (albeit from a distance) on what's happening at the Cannes Film Festival right...