When an author says that he wants to win the hearts of the readers, you know that his story will be different. The Whispering Trees not only won my heart but many others as well.

Abubakar Adam Ibrahim’s story recounts Salim’s revelation of life’s bigger picture, which he comprehends only after a life-threatening car accident that claimed the life of his mother, Ummi, and also brought his permanent blindness. The story revolves around his turbulent relationship with his love, Faulata, and her patience during his recovery and his journeys into the after world. Here, he meets with friends who died long ago, and also re-enters the woods that hold the Whispering Trees, which is a place of childhood memories, reconciliation and spiritual healing.

“It’s strange how things are on the other side of death. I fear I am incapable of describing the experience to you because I do not know what words to use. One simply has to die to understand the enigma of death.” 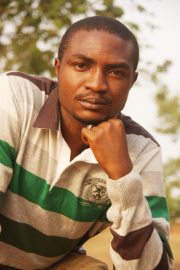 The opening paragraph takes us to an unfamiliar place, a place that becomes almost tangible. While the rest of us reside on this side of life, there is another more alluring side which words cannot describe. We are invited to be part of an experience which we see only from the main character’s perspective — in this case, Salim. The story is set on the premise that there is a lot to learn and, as every good story should, it offers its readers a new experience.

Salim is refreshingly normal. He is a human with fears, career aspirations, a foolish love of the opposite sex. This normalcy makes his journey more believable because we witness the makings of a finely rounded character. From the start of the story, after the car crash that takes Ummi’s life, Salim enters a trance with heavenly melodies that usher in the presence of Faulata. This interaction brings the revelation of his blindness, the way he admonishes those around him for his loss. The blindness separates him from his medical career and causes him to stumble over objects, making him the laughing stock of those around him — especially his sister’s friend, Surata. Faulata is driven to internal rage, which she carefully conceals with endless care over Salim. When she finally snaps, she beats up Surata for her meanness to Salim and even threatens to burn her house. Faulata, a symbol of our limitations, shows that even the most angelic of us have failings.

When university studies take up more of her time, she spends less with Salim and he is able to uncover a spiritual strength that, due to his overdependence on Faulata, he never knew he had. A brutal argument also makes her more distant even though she returns once in a while to help.

Faulata, a symbol of our limitations, shows that even the most angelic of us have failings.
His encounter with the Whispering Trees, which were a childhood playground, is a turning point in the story. It was here that an incident led to the death of his friend Hamza. Hamza reappears to Salim’s conscience and invites him to be a part of this world where forgiveness is possible, eternal joy is complete and happiness is reachable. He is able to guide Salim to a deeper place in his soul so that he too can seek and do the things that account for something much bigger than immediate pleasures. For Salim’s spiritual eyes to be fully open however, Faulata must leave so that he depends on inner strength. When she gets engaged to another man, he is thrown into another fit of despair but the truth of the Whispering Trees enables him to pick himself up and embark on a new path in life. He attends Braille school and learns to manoeuvre himself using a cane. Furthermore, Salim gains insight into peoples’ hearts and the short-lived pleasures that ultimately make them sad.

This spiritual overflow and revelation lead Salim to an ultimate point in his life and his former troubles appear miniscule in comparison.

“It was a needless rinse, this bowl/ half wood, half smelling from wood/ that’s been taken away, trembling”
Poem of the Week (17 May), by Simon Perchik

Story of the Week (June 21), by Faiqa Mansab