The role of the auteur in cinema is a central, yet often contested, facet of filmmaking. Auteur theory has become one of the largest bastions of film criticism, seeking to identify and analyse those directors who have a visual poetics beyond the artisanal assemblages of their peers. Our task as critics is to walk the galleries of tropes that wind through the auteur’s oeuvres, approaching these works as we would a collection of poetry. It is apposite, then, that we are continuing the last article’s engagement with the work of Charles Baudelaire in relation to film.

In ‘The Salons’, his masterful compendiums of art criticism, Baudelaire considers the position of the artist in frequent detail. Here lies a further tessellation with film criticism, where an application of his ideas to the figure of the auteur can perhaps suggest new ways of reading these central cinematic figures.

I wish to consider the auteur here in particular relation to adaptation, both in their transmutation of the real into the reel, and also in the tradition of adapting original (usually written) texts. We can conflate the figure of the auteur with the figure of the painter in Baudelaire’s analyses; as with the colourists, the positions are close in their visual instinct and techniques of creation.

In these dialectics the director shifts from existing as the figurehead of an assemblage, and fits more into a Romantic niche of the solitary creative artist. For those with the distinctive vision and individual style that brands them auteurs, this shoehorning into a poetic archetype is less of a stretch: it is the megalomaniac control and marshaling of detail by directors such as Herzog and Bergman that gives their films such strong, original visual cues and structures.

Baudelaire’s concept of “temperament” is particularly interesting and harmonises well with the techniques of artistic filmmaking and creative adaptations. Eugene Holland, in his book ‘Baudelaire and Schizoanalysis’, calls temperament “the touchstone of Baudelaire’s early criticism”. This idea is that of the balancing act performed by the poetic imagination between the “collective past and the artistic present”; it is that delicate juxtaposition between originality and knowledge of tradition. Two cinematic examples strike me as stark illustrations of this concept; and both are dredged, intertwined, from the same ancestral mire and blood. Murnau’s Nosferatu, a Symphony of Horror (1922) and Herzog’s tribute to that film, Nosferatu The Vampyre (1979), respond well to these ideas through their dangling chain of textual ancestry, and through their inarguably individual auteurs. 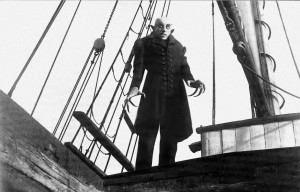 Nosferatu, a Symphony of Horror

In his Salon 1845-6, Baudelaire reveres Delacroix as “one of the rare men who remain original even after having drawn from all the right sources”, and praises his temperament as the most refined. In the examples of the two Nosferatu films, we can see that idea of temperament being enacted in an obvious way. For Murnau, denied the rights to Stoker’s book, he was forced into creating a more protracted gulf between his film and the source material. What emerged was a kind of dream of Dracula, a re-imagining of the story that held particular leitmotifs and yet set them visually within expressionist tableaux that were seamlessly original. Here we see the artist holding his knowledge of the canon, of the primordial matter, in one hand, whilst in the other he balances his own artistic imagination. Like the feather of Ma’at and the heart of the artist, the scales must sit right for the composition to remain perfectly balanced. Murnau’s film takes the framework of the text, using its foundations in the cultural consciousness to ground his work, and then builds his own thematic spires atop these.

Herzog’s 1979 homage to the 1922 film is an even more effective illustration of the concept. This film exists in a complex space with regards to its ancestry. Murnau’s film has its weighty textual antecedent, but only this one birth mother to acknowledge and transcend. Herzog’s has that, but permeated to an incredibly saturated level of cultural consciousness, not to mention the myriad other adaptations, tributes, rewrites, parodies and references that have proliferated since then. This is, after all, one of the most reanimated corpses within cinema’s textual catacombs. Whilst Baudelaire’s theory relates to the whole length and breadth of humanity’s artistic accomplishments, and this aspect can definitely be the case within cinema, I feel it is also intriguing to apply it (as I have been doing) in a more diminished, compacted form; in relation to this knowledge of the adaptive text. 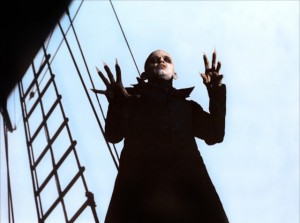 Herzog’s film is a perfect representation of the concept – it is tribute rather than pastiche. Though I have lauded Gus Van Sant’s use of colour, his own ‘homage’ to a classic, Psycho, was a pointless shot-for-shot remake. The scales of his temperament were clearly unbalanced on that project, and so his creative heart was fed to that many-headed Ammit, the critical populace. In Herzog’s adaptation we see the painter-poet’s judgement, the instinct of the auteur. He takes a framework in pastiche, lifting Murnau’s foundations that have become as ubiquitous as Dracula’s in their own right, and transposing them just as Murnau did with Stoker’s many years before. These familiar tropes are what anchors these films in their lineage, they are Eco’s cult objects; parts drift free from the whole to be appropriated across the cultural plain.

Herzog takes the 1922 film and those cult parts of it we remember; the shadows, the doorways, the woods, coffins and castles and brings his own aesthetic, a hallucinatory symbolism and melancholy mood, eschewing the vulgar Realism or re-appropriation of Hollywood remakes. He acknowledges and dismisses the panoply of Dracula adaptations in the instant that he drives straight back to the cinematic heart of the vampire, which is Murnau’s creation. He demonstrates Baudelaire’s theory of temperament perfectly, by holding the cultural knowledge in one side of his scales, and weighing it against his own auteur’s voice, referencing the chain through his adaptation of an adaptation. He appropriates the framework which he feels has the most merit, acknowledging the lineage of the text before freeing the “individual present”; his particular artistic approach to soar above the echoing chambers of textual history. Like Delacroix, the artist anchors his own originality with the chain of representations that constitute the life of the text. The auteur holds these in their mental peripheries, whilst casting the spirit of the text in the bronze of their creativity.

Marcus Nicholls is Film Critic for the magazine.

In this essay, Senior Articles Editor Aaron Grierson writes about freedom in the digital age and just what it means in the ever-expanding Information Age.

"Since spring, Geneva has thrown open her home to soldiers." Poem of the Week (August 20), by Anis Shivani