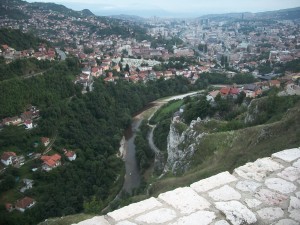 View of the city, including the Miljacka river

A shabby blue-and-yellow train is due to depart shortly from the station, filled with people of all descriptions. A tall, decent-looking young man knocks on the window of one of the compartments. He starts stuttering, asking the older man who opened the window whether or not the train goes to Zagreb. As the train starts leaving and the older man starts yelling at the youngster that he might be too late, the young man mysteriously stops stuttering, while his sidekick appears with the yelling man’s suitcase. The man is now yelling for different reasons. He’s been tricked by two typical Sarajevo con artists. The two young swindlers do not know what’s in the suitcase — they do not care what their booty is or how much it is worth; they simply take whatever they can get. They nonchalantly wave at their target, wishing him a nice trip, and then they walk away.

This opening scene from Dejan Radonić’s movie Duhovi Sarajeva (The Ghosts of Sarajevo) best captures the atmosphere of the post-war Sarajevo, the capital of Bosnia-Herzegovina. This city, once praised for its peaceful coexistence of various religions and peoples, is now the mecca of charming, careless frauds living in the moment. These people know that everything around them can disappear in a moment, so why bother? They live their lives from one day to the next, taking whatever they can, not worried if someone else takes it from them.

The whole city is characterized by a relaxed atmosphere and an unusually nonchalant attitude toward material goods. Street vendors will give you merchandise for free if you seem friendly and/or exotic.You might end up paying less for your postcards because the person selling them is too lazy to go find change. People who notice you look confused or lost will offer directions and advice, regardless of your willingness to follow them. The small size of the city,with a population of around 330,000,allows for an intimate atmosphere which might sometimes seem too intrusive to people not used to it. On the other hand, it makes approaching people extremely easy, which is why you should never be worried about your social life in Sarajevo. 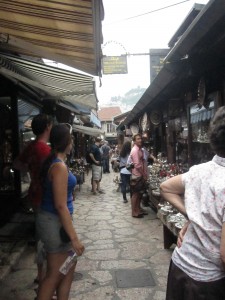 And once you meet interesting people, you have plenty of places to take them. Sarajevo has some very alluring restaurants, bars to suit anyone’s taste, clubs, and hookah bars.You must, however, be prepared for waiters overcharging you because — yes, that’s right —they’re too lazy to go find change, or even simply because you are a foreigner. Don’t take it personally; they’d do it to anyone, just because they can.  And if you see through their little scam, and call them out on it, they’ll expect you to forgive them.

Because that is what the people of Sarajevo are like: forgiving, careless. They forgive their gonifs the same way they forgave their slaughterers; the same way they forgave the international community for being blind to their cries for help; the same way they now forgive their politicians for making today’s peace even worse than yesterday’s war. But, don’t worry; you, as a tourist, probably won’t notice the attitude of despair. You will most likely only see the carefree nature and the relaxed atmosphere, and you might even decide to partake in the craziness and have a great time on your nights out. And on your way home, you can expect taxi drivers to hit on you, or offer you illegal drugs.

The city was not always this way. At its conception by the Ottoman Empire in the 15th century, Sarajevo was the biggest and the most 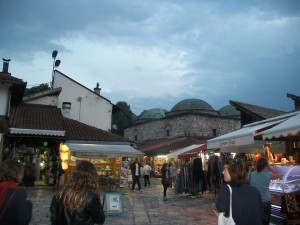 developed city in the region. The Ottomans built some of the most remarkable landmarks of Sarajevo, such as the famous Tsar’s Mosque (Careva Džamija) and the circular city center, called Baščaršija, as well as Europe’s first public toilet with running water and a functional sewage system, in 1529. However, soon enough, the city’s precarious position between the East and the West took its toll in the form of numerous wars, culminating in the Bosnian War for Independence. This devastating war gave Sarajevo the unwanted record for the longest siege in the history of modern warfare: it was completely cut off from the rest of the country and the world when the Serb forces of the Republika Srpska and the Yugoslav People’s Army besieged the city from 5 April 1992 to 29 February 1996.

The so-called Tunnel of Salvation, or Tunnel of Hope, is a one-of-a-kind monument to the strength of the human spirit, built by the people in Sarajevo during the siege. Today, tourists can experience firsthand how it felt being inside the only safe connection to the rest of the world during those days. There are many other museums bearing witness to the history of this complex city, such as the beautiful Svrzo’s House, regarded as a typical example of Bosnian architecture during the Ottoman times, or the Museum of Sarajevo 1878-1918, which guides visitors through the Austro-Hungarian period. One of the most important museums, the National Museum of Bosnia-Herzegovina, has recently been closed due to alack of funding. The museum displayed many important historic artifacts, including the Sarajevo Haggadah, an illuminated manuscript which is the oldest Sephardic Jewish document in the world, dating back to around 1350. 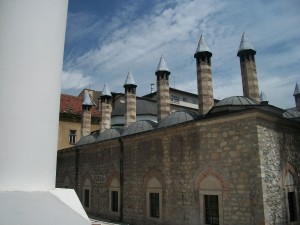 The closure of the museum is all the more tragic considering its possession of materials that bear witness to the city’s rich history of multiculturalism. Until the 20th century, Sarajevo was the only major European city to have a mosque, a Catholic church, an Orthodox church and a synagogue within the same neighborhood. The city’s eclectic lifestyle is reflected in the mixture of oriental and modern Western architecture alongside more local efforts of modern architecture, such as luxury hotels and shopping malls resembling those in the Western world. The city is rapidly improving its tourist ratings and building new attractions for the outside world.

Although Sarajevo is now considered one of the fastest developing cities in the region, there is another side to the story. These grandiose modern buildings have been built on the grounds of war by war profiteers and nationalist politicians, often at the expense of regular citizens. The large-scale criminals are untouchable, enjoying positions gained due to the war and the nationalistic tensions in the country, whilst the ‘little people’ can do nothing against it.

Perhaps it is for this reason that the people of Sarajevo are so forgiving of petty theft and small-scale deception. The scene with the stuttering man stealing a suitcase is just a story of a guy trying to make a living, someone who perhaps has skills and knowledge, but has been stripped of the possibility of proving himself in a society which does not value either. It is relatable. It is likeable. It is rebellious in a way. It is a warm story of underdogs trying to survive and follow their dreams however they can. Somehow, somewhere along the way, you find yourself rooting for the success of the charming fiddlers because, after all, they are the people. You want them to win, to beat the system because their interests, in a way, represent your interests as well.

Unless, of course, you are the man whose suitcase just got stolen.

Story of the Week (August 2), by Julio Figueredo. Translated from the Spanish by Simon Bruni.

The Faber Book of

"The publishers would like to/ Gratefully acknowledge themselves." Weekend poem, by Rowland Bagnall.