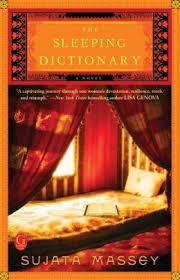 In a rough mirror image of the structure of Ada, Nabokov’s rather bewildering late-career masterpiece, The Sleeping Dictionary is organised into four sections, each roughly double the length of the previous section. Massey’s novel is of mixed ancestry, combining material from the India Office archives in London with the Bengali poetry of Rabindranath Tagore and information drawn from multiple biographies of Subhas Chandra Bose; the Lockwood school section owes a significant debt to both Jane Eyre and Wuthering Heights, whereas other chapters would be more at home in a Rushdie novel (the twins, Rumi and Jhumi, are part of the extended family of rhyming literary sisters which also includes Shame’s Chunni, Munnee, and Bunny Shakil).

This is a world in flux, and identities are fluid from the very first sentence: ‘You ask for my name, the real one, and I cannot tell,’ the protagonist confesses at the opening of the first section, set in the fictional Bengali town of Johlpur. Instability will turn out to be a recurring motif, with the protagonist starting life as ‘Didi [elder sister] or Pom’, and wearing a different identity (some are tighter fits than others) in each of the four sections: she is Sarah in Midnapore, Pamela in Kharagpur, Camilla Smith and then Kamala Mukherjee in Calcutta. It would be reasonable for Kamala to claim, as Saleem Sinai does in the opening section of Midnight’s Children, that ‘Consumed multitudes are jostling and shoving inside me.’

In a rapidly-changing India characterised by instability, language (to adapt a well-known Latin aphorism) is power. At Lockwood school, ‘Sarah’ is able to transform from ‘Cinderella the scullery maid to a young lady in a ball gown’ thanks to her aptitude for English: ‘Learning  English was like catching fish without touching water, as Thakurma used to say about good things that came too easily.’ Promoted from scullery maid to confidante of Bidushi, the jamidar’s daughter, ‘Sarah’ comes to equate language with wealth: ‘I felt secretly rich: each word I learned was something that could never be taken away.’ When ‘Pamela’ is exploited in Kharagpur, language is one of the last forms of power (in this case, power and control become synonymous) left to her: ‘Jayshree and Mummy might give my baby any names they wished, but I would not use those names.’

You ask for my name, the real one, and I cannot tell.
But which language is power? Kamala’s path leads away from her mother tongue, Bengali, and towards the language apostrophised in Vikram Seth’s poem ‘Diwali’ as ‘English! Six-armed god,/ Key to a job, to power.’ Kamala remembers the title character of Rudyard Kipling’s Kim, ‘a sunburned English boy who pretended to be Indian so he could live freely’ and vows to ‘do just the reverse.’ In Calcutta, when she finds herself relying on the kindness of strangers, the stranger who steps forward to redirect Kamala’s life is a wealthy English Civil Service officer. Is Kamala’s Indian identity simply a skin to be sloughed off on her long crawl to freedom?

Yes and no. It would be immensely reductive to see Kamala’s trajectory as a rejection of Indian values. The English officer she meets in Calcutta is the owner of a vast library of books on India, an advocate of independence, and a strong supporter of Kamala’s native region: ‘He had even convinced some colleagues in Delhi to direct national funds toward relief in Bengal.’ It is possible to assimilate another culture without losing touch with your own.

Kamala’s journey brings her towards a point between two cultures: the intersection where opposed attitudes and backgrounds meet and melt together. The Sleeping Dictionary stands out as a bold and ambitious novel precisely because it dares to present what Sujata Massey describes in an interview as ‘a relationship between a British man and an Indian woman that could turn out to be nonexploitative.’

At surface level, The Sleeping Dictionary is another rags to riches story; between the lines, it’s a celebration of the common ground between superficially disparate cultures and personalities. The multitudes within Kamala, too, turn out to be inextricably connected: as with all Cinderella stories, the princess, the ‘young lady in a ball gown’ with her dreams temporarily fulfilled, does not exist independently of the scullery maid.  Like matryoshka dolls, ‘Sarah’ the scullery maid and ‘Pamela’, exploited and impoverished in Rose Villa, are part of ‘Kamala’ the Englishman’s wife. ‘I told myself I was not the same person anymore,’ reflects Pamela in Kharagpur, but the threads connecting each of us to the past are not severed so easily.

Jacob Silkstone is Literature Editor for the magazine.

“The crowd stood, eerily quiet, gawking at the headless body doused in blood, tottering like an effigy in the cart as it creaked along.” Story of the Week (September 13), by Khanh Ha.