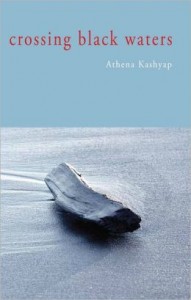 Athena Kashyap’s debut poetry collection, ‘Crossing Black Waters’, is a poetic testimony to the reality of immigration in different conditions and times in human history. Drawing on her own experience of moving from India to the U.S., Kashyap gives a voice to other immigrants: a Peruvian college student caught between two worlds, an illegal Mexican immigrant crossing the barbed wire border, members of her own family who moved during the partition of India.

Talking about her family’s forced relocation, Kashyap exhibits a great deal of understanding and empathy for their experiences. Through her poetic journey, she explores concepts such as identity, roots, and belonging. In the collection’s title poem, she uses the metaphor of floating to describe the feeling of being disconnected from one’s roots. She further develops the roots allegory by describing an imaginary visit from her great-grandfather who is “waving dead roots in my face”, representing the detachment from one’s origins and at the same time showing the impossibility of breaking connections between a person and her kin.

The symbolism of “crossing black waters” lies in the old belief that crossing black waters, the oceans, leads to losing one’s identity and becoming an outcast in India. Kashyap writes that “once she stepped outside, her skin/dissolved”, suggesting that a move away from one’s own country can be a kind of death: one needs to rebuild a new identity if one is to survive in new circumstances. She portrays the desolation and loss of identity which may come as a result of being detached from one’s roots, at the same time depicting our need to form meaningful and safe connections.

A move away from one’s own country can be a kind of death
Kashyap’s work exhibits an interesting stylistic trait which is used to convey the emotional experience of a migrant to the reader. She inserts various words and concepts from Indian languages into the poem, creating a world permeated by a constant sense of uncertainty. For an Indian reader these words and concepts might bring another layer of meaning; to a non-Hindi speaker, however, they mimic the sense of confusion many migrants face when they encounter new customs, languages, and cultures, thus bringing the reader closer to that experience.

‘Crossing Black Waters’ is a personal but simultaneously all-encompassing testimony to migration and the complex processes of incorporating multiple cultures, multiple lives a person has into one experience. Like Gabriel García Márquez’ ‘100 Years of Solitude’, ‘Crossing Black Waters’ is an homage to a family whose history seems to repeat itself, but also in a broader sense, a testimony to today’s pluralistic, globalist world in which traditional definitive identities, such as nationality and religion, are being challenged and invited to incorporate elements of other cultures in creating a less rigid, more open sense of the self.

Poetry by Mehvash Amin from our ninth issue.

"To lie is to spare her some needless suffering. Is therefore an act of mercy, kindness—of maybe even love." Story...