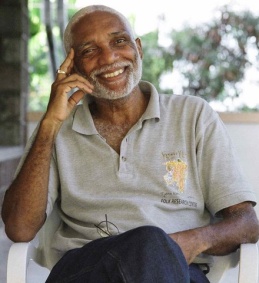 The latest in our series of Poet in the Month interviews is perhaps the widest-ranging yet. John Robert Lee discusses his own work, past and present, and provides a beginner’s guide to the contemporary art scene in St. Lucia. Readers of this interview should be able to see at a glance why John Robert Lee has been described as ‘a caretaker of the files in the archive of the St. Lucian soul’…

Click here to read ‘After Gary Butte’, our Poem of the Month.

‘After Gary Butte’ strikes me as an enormously wide-reaching poem, covering great distances in space and time and tone. Could you tell us a little more about how you came to write it? Where exactly was the point of intersection between Gary Butte’s paintings and your poetry?

The poem is an intuitive response to the work of Gary Butte. I found his work to be very different from the work of other St. Lucian artists. So I selected some pieces and over several months, just literally stared at them, studied them and allowed them to, as it were, speak to me, to pull out from me, their own response. So while I was searching out Gary’s work, his work was searching me out, and pulling from me a response. And after a long while, the lines of the poems and  the poems started to come. Gary’s work carries within itself those great distances in space and time and tone and the poem reflects that. Of course I suppose what was touched in me were my own interests and concerns that resonated with the work. But I tried the best I could to keep it intuitive, not forcing anything on to the art. I used the titles of the paintings as the titles of the individual poems. As to a point of intersection between Gary’s paintings and my poetry, I suppose it is the depth and vision of his work that interests and excites me. I try always for depth and vision in my own writing.

Vladimir Lucien has called you ‘a caretaker of the files in the archive of the St. Lucian soul.’ Would you be able to pinpoint any qualities which you feel are specifically St. Lucian? In what ways does ‘the St. Lucian soul’ differ from a more general ‘Caribbean soul’?

Every Caribbean island is unique even as we share so much in common. St. Lucia’s unique qualities come from its Creole/Kwéyòl history and culture, a blend of French, English, African, Asian and the older Amerindian that have become something new in Kwéyòl language and culture. Add to that the influences of the contemporary cultures, especially North American. You sense the St. Lucian unique spirit especially in its folk music and dance. I have tried t0 capture this in some poems drawing on the music and dance and dress. As in Creole Canticles: 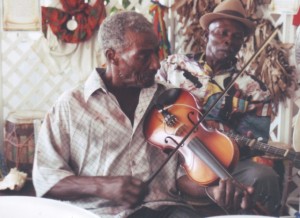 Let us praise His Name with an opening lakonmèt,

and in the graceful procession of weedova;

let laughing, madras-crowned girls rejoice before Him in the scottish

and flirtatious moolala, its violon hinting of heartache.

And while we forget time turning in quick-heeled polkas,

pause during the tentative norwegian —

for when the couples end the gwan won,

you alone must dance for Him your koutoumba.

I was glad when they call me to go up in the Séwénal.

The violon scraping my heart,

banjo and kwatro thrumming my grief like their plectrum,

and the guitar pulling my heel.

—I only seeing her tuning the mandolin on her bosom —

“wait for the bow, the bow and the courtesy,

wait for the sax, the drum and the kwadril to start.” Selah.

And so, she has come: to the gold-flecked Wob Dwiyèt,

its long train in folds over her left wrist,

the clean petticoat adorned with lace,

the satin foulard, the head-piece of rainbow madras—

from the nondescript costume of the far city,

from the profligate famine of Cardun’s estates—

to that Bright Brooch on the glistening triangular foulard.

The cascading words of my hand

pluck His praise from eight-string bandolin and local banjo,

place His favour on madras and foulard, the satin and the lace,

plait Him a crown of anthurium and fern —

He is the Crown, the Star of grace, the Dancer of creation,

the Robing of righteousness, Tuning of the spheres,

Hand of the Incarnating Word.

Séwénal – a musical tradition of St. Lucia in which musicians and others with any object that can make a musical sound walk in procession through the town – making music and diverse sounds, of course.

Kwadril (quadrille) – folk dance of St. Lucia, out of the French heritage.

Foulard – a triangular scarf-type part of the wob dwiyèt that is placed over the shoulders. It is usually fastened at the front by a distinctive brooch.

Cardun – a name created by the poet to describe a certain bacchanalian sprit of carnival licentiousness. (from the expression “fete can’t done.”)

In terms of contemporary Caribbean, the “soul” of St. Lucia is very much at one with the general Caribbean. Musical styles from Jamaica, fashions and technology from North America, and unfortunately, the drugs and crime and social ills are as much with us as with everywhere else. And of course this is Western society everywhere. We are a Western society with all the goods and bads of that historical and social reality.

“The hair kept all the other things about her running, strengthening her from its shadows…” First Friday flash fiction (August 1) from Maria Pinto.

"When my sister and I were eggs/ and my mother walked to the store/ it rained milk." Poem of the...