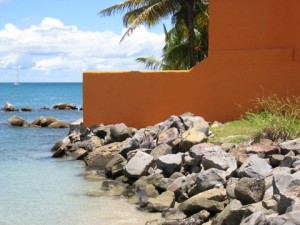 “It’s really a fine day. Everything is like a postcard.”

She wrote in the sand, looked over the water to the green hills, to the clear shape of the island on the horizon, at the children splashing, and looked up into his face.

“Yes, you know, with all the colours, of everything, so clear.”

She looked again, at the sky with the sea-gull gliding, silver, but her mind was full of his tendernesses and she did not know what she was going to do.

“You remember that postcard you gave me, of the little boy, with the straw hat?”

He stopped trying to see the gull against the sun and faced her. A small frown shaped between his brows.

“Which one was that?”

“You remember,” she pouted, “the first card you wrote me, the card you brought to wish me luck in my History test, you remember.”

He leaned back with a grin.

“Of course,” he replied, searching her face, “I remember, I remember now.”

They smiled at each other and she blushed, her dimples deep.

“I remember,” he said softly, looking out to sea again. An aeroplane appeared over the hills. They watched until it dropped behind the lighthouse on the promontory.

“It’s really nice today,” she said, “I should have brought my bathing suit.”

“True, and give that beautiful body some good sun.”

She laughed, her arms around his neck. He held her around the waist, his head on her breasts.

An old woman with a small pail came near, collecting almonds, and they moved apart.

“So you think you’ll take the job in the country,” he asked, leaning back.

“I haven’t decided yet. I don’t know what I’ll do. Housing is always a problem.”

“The country will be good. It will be alright, you’ll be okay.”

“Mr. Optimism,” she said, a little roughly, “everything will always work out, eh?”

He watched the children playing football and lifted his gaze to the red and white lighthouse.

“ ‘Let not your heart be troubled.’” He looked into the sky. “I don’t see why I should worry.”

Distractedly, she drew a heart in the sand and added an arrow.

“So what you going to do, when you get home?” She was feeling that horrible emptiness in her stomach.

He caressed her foot.

She stood up and shook out the leg of her jeans. She stepped on the heart and arrow and rubbed them out. She kept staring down, away from him. He watched her and then stood up, put his hand on the nape of her neck, and kissed her on the lips. 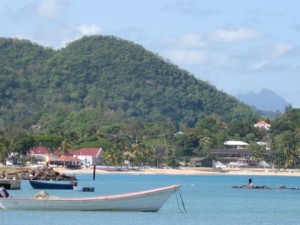 She hugged him tightly and desperately.

“I am glad you came here,” she said finally.

They picked up their shoes and walked down the beach, their arms around each other. A plane took off from the nearby airport and came roaring low over their heads. They watched it climb over the hills.

She took his hand and they walked where the water broke softly, letting it wash their feet and wet the cuffs of their jeans.

“You too,” she whispered, kissing his fingers, and coming close to him.

A football bounced near them, the group of boys came screaming after it, and surrounded them. He kicked the ball away, then they sat on the root of an almond tree and put on their shoes.

Readers wanting to know more about John Robert Lee’s work should take a look at our November Poet of the Month interview.

“This is the effect of atheism on a certain mould/ of character – you build your gods out of stray people.” Poem of the Week (November 11), by Monidipa Mondal.