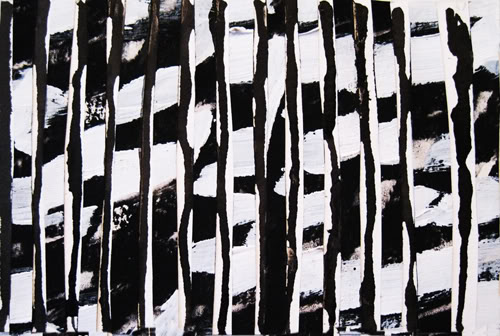 In this excerpt from Elias Khoury’s previously untranslated novella, ‘The Smell of Soap’, the narrator goes to the cinema with a girl he just met. As they watch a documentary on the musician Jamil Al Haddad, the narrator fantasizes about the hours that will follow the film and also remembers his years as a member of an armed militia in Beirut.

We rushed into the movie theater. The lights had begun to dim and darkness to surround us. The moment of darkness that precedes the lights emanating from the screen is the most beautiful of the film. Darkness, she by my side, her laughter still ringing in my ears, and Genghis Khan’s picture filling my eyes. But I don’t spoil the movie for her, and she doesn’t look at me. She looks at the screen where we see the director’s and the actors’ names and a background image of a man lying on the ground with his lute at his side, and loud music. But she doesn’t like war, and I think if we asked Genghis Khan whether he liked war he would say no. Or he would light his pipe, sit cross-legged, and start to discuss the future while smoke blew out of his mouth and nose. And I am ready, ready to talk to her in better words than his and without smoke, but she doesn’t want to listen and I don’t want to speak. I want her. I want this long black hair. I want.

“What did you say?” she asked

“Nothing, nothing. Yes, have you been to a cemetery?”

She asked me to lower my voice. She said that she hadn’t been to one, and she didn’t ask me why I asked her.

She stands in front of the theater’s entrance in her short skirt, her elongated white face, her hair tied behind her back, and her eyes, colored in the midst of this darkness, and laughs.
The screen is gleaming with lights. The old man walks. He is old. He carries a lute in his right hand and walks in an almost empty road. The old man looks around, stands in front of a shop, talks with a group of men gathered around a backgammon table, then continues on his way. A voice like his fills the screen, as if he remembers, but he doesn’t. He speaks about the wedding, speaks about Umm Kulthum. Umm Kulthum is the greatest singer. That’s a singer. She stands four hours in front of the microphone while thousands of men moan and kneel before her.

A side snapshot of Umm Kulthum.

A panoramic snapshot of the stage where she stands. Voice and applause.

The old man approaches the stage. The same man, but he is younger now. His back is not hunched. He doesn’t hold a cane, and he moves forward. Umm Kulthum goes on singing and squeezes a white handkerchief. He reaches the stage. Umm Kulthum looks at him. She stops singing. Silence and a distant roaring mingle with the man’s footsteps on the floor. The old man climbs to the stage. He approaches Umm Kulthum. Umm Kulthum holds his hand. He advances and kisses her on the cheek. Umm Kulthum speaks. Umm Kulthum says, “And now, ladies and gentlemen, I present to you the greatest composer, Mr. Jameel al-Haddad.” Hands clap, music gets louder. Jameel al-Haddad approaches the orchestra holding the conducting baton in his hand. Umm Kulthum sings “I Forget You” while he dances with the baton in front of her. His face crisps while she sings. Loud applause as though coming from the bottom of the valley or as if it were an echo. The old man walks and the sight of Umm Kulthum falls gradually off his shoulders and vanishes. He reaches the front of a building. From the way he enters the building he seems to be living there. He climbs dark stairs.

The motion is slow, I said to her. She placed her finger on my mouth to shush me. I took her hand in mine, squeezed it, and looked into her eyes glistening amid the darkness of the hall. She was looking at the screen. I raised her hand to my mouth and kissed it. I pulled her hand as I thought I heard her moaning. The moaning increased. My head drew near her face. I looked at the screen.

The man is lying in bed, moaning. It’s an iron bed, and it makes a broken squeaking sound. The man reaches for the radio and turns it on, then he lowers his eyes. Umm Kulthum’s voice rises.

“It looks like we’re going to watch a movie about Umm Kulthum.”

The voice retreats and starts to decline. The same man turns back into a young man. Here he is standing in front of a table while the voices of the commenting employees ascend. We understand that he is an employee, and that he is inviting them to a concert where he will play his lute. We understand that they are laughing at him as he stands in front of the table and raises his hand high as if to say something, as if he is giving a pep talk. Applause begins. Applause, and he in front of the audience holding the lute. It seems that they are in a house. Jameel al-Haddad sits on a chair and croons softly. Hands rise holding glasses of arak. A little table on which there are plates of cucumbers and peanuts. Men, only men. There is one woman who comes and goes. She takes ashtrays and brings plates full of something that looks like food. The man’s voice starts to rise. It seems as if he is singing. We cannot distinguish the song with precision. Then we understand gradually that he is singing Umm Kulthm. “I forget you, Ya Salam.”The audience screams, Allah Allah!. He takes his glass and drinks a sip of arak. A snapshot of his face where we see a carelessly shaven beard. The man turns in his bed. He didn’t take off his clothes. He lies fully clothed. He seems hallucinating or talking in his sleep.

Less than a Drop

Darkness damages desire / Living is less than a drop / Don't waste your whole body / Now ~ By...