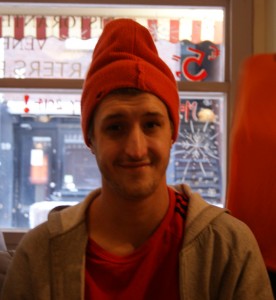 In our latest Poet of the Month interview, emerging British writer Rowland Bagnall talks to Audrey Ryback about writing routines, the poets everyone should read, and how his interest in poetry goes back to Larkin writing about ‘Huge tits and a fissured crotch’.

‘Triptych’ seems like a very painterly title — when I hear it, I think of mediaeval panel paintings.  Is your title primarily a reflection on the structure of your poem, or does it have a deeper symbolism? What does ‘triptych’ make you think of?

Unfortunately, when I think of ‘Triptych’ I think of three not-good portraits of Woody Allen I painted as a seventeen-year-old. This being said, I suppose the title works on a kind of unifying level here. The three parts of this poem were originally separate, until I realized that they seemed to fit together. I consider this poem to be about twos rather than threes, “the same thing twice, / in two ways”.

I’m interested in the roots of your interest in poetry. Why, when, and how did you start writing? Are you a believer in Keats’ dictum ‘That if poetry comes not as naturally as the leaves to a tree, it had better not come at all’?

I’m interested in the roots of my interest in poetry too, so I don’t really have an answer to this question. I remember being given a copy of The Whitsun Weddings at school and seeing that not all poetry had to be about flowers and/or being in love. Larkin was writing about “Huge tits and a fissured crotch,” which I suppose appealed to me at the time. But I didn’t start writing poetry seriously – i.e. poetry which didn’t sound terrible or, worse, like terrible Larkin – until I arrived at university, by which time I’d decided that this was what I wanted to do. I set out to ‘read all the books’ so that I could write better poems. It isn’t going very well.

As for Cockney Keats: a nice idea, but hard to take seriously once you’ve seen the revisions in his manuscripts.

A friend of mine told me recently that Jonathan Franzen used to blindfold himself daily, touch-type for 6 hours and then get drunk on vodka with his wife. I don’t do this.
When and how do you accommodate writing into your daily routine? Does writing complement or interfere with your undergraduate studies in English? Do you have any literary rituals?

Good question. I haven’t thought about the interference idea. I just write when I can/want, usually at night. I haven’t noticed my work getting in the way. More recently I’ve considered that I’m studying literature so that I can write more betterly. This is important.

Not sure about rituals either. A friend of mine told me recently that Jonathan Franzen used to blindfold himself daily, touch-type for 6 hours and then get drunk on vodka with his wife. I don’t do this.

I find your opening lines, “Many good men/ have been killed by a woman”, very powerful. I really enjoy the power-plays between male and female throughout this poem. Is this a theme you explore recurrently in your poetry? Are there specific themes you find yourself pivoting around?

I suppose I often write about difficult relationships. I have a character called Rosso, and I write about him a lot and he’s a pain. I also write about the visual arts, which I’m very interested in.

Finally, you say in your bio that ee cummings and John Berryman are your greatest literary interests. What is it about them that inspires you?

I go through phases of liking and disliking cummings, I think. I must have been liking him when I wrote that.

I’ve been writing a paper on John Berryman for the last two months, though, and I do like him. It’s difficult to know where to start with The Dream Songs, a devastating poem and a very funny one. He writes what he wants, and worries about it later. Or, more accurately, doesn’t worry about it at all. We all wish we could do that.

Another poet who should really be on this list is Ben Lerner. Everybody should read him lots of times, and then read him again.

Audrey Ryback is an Assistant Poetry Editor for the magazine.

“When my sister and I were eggs/ and my mother walked to the store/ it rained milk.” Poem of the Week (December 3), by Jeff P. Jones

Film critic Jay Sizemore on why Wes Anderson's latest is "easily the best film of 2014 so far".