The festival in numbers

The number of Missing Slate editors at Rebecca Goss and Helen Tookey’s reading on Sunday morning. Having turned up five minutes late, we were informed that sneaking into the Edge Arts Centre was absolutely out of the question, and ended up shuffling off to the cinema to watch a film based on Alice Oswald’s ‘Dart’ instead.

The number of poetry-themed items on the Poetry Café’s festival menu: the Housman’s Ploughman’s. For next year’s festival, we’d like to suggest Petrucci bolognaise and Armitage shanks — combining delicious portions of lamb meat with the name of everyone’s favourite modern troubadour.

The number of young poets (Lauren Williams and Flora de Falbe) who read directly from their iPads. Is this the start of a shift away from readings accompanied by the anxious rustling of A4 sheets? Striking a defiant blow for the slightly (but only slightly) older generation, Wordsworth Trust poet-in-residence Zaffar Kunial brought a magnificently coffee-stained manuscript to his reading.

The number of Dutch poets at the festival, including current Poet Laureate Anne Vegter, who began her writing life with children’s books ‘written in a noticeably free and lively style’. Accompanying Anne Vegter at the Edge Arts Centre on Sunday afternoon were Arjen Duinker and Nachoem Wijnberg. 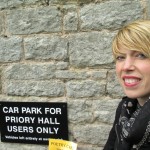 The number of poets badgered into taking selfies for The Missing Slate. One of those poets was Helen Mort, who analysed the selfie phenomenon in her Poetry on the Brain blog at the beginning of the month, writing that ‘We are reflections of our culture and vice versa, a strange and vicious circle. The ‘selfie’ holds a camera up to our society.’ Helen was adamant that her selfie should contain as much background as possible, and managed to work in a sizeable portion of the car park wall. ‘My favourite kind of author photo,’ she wrote in her blog, ‘would be… out climbing, the rocks and the route as much of a focus as the body of the person.’

The number of Wenlock Poetry Festivals so far. The support of Poet Laureate Carol Ann Duffy, who described Wenlock as ‘the perfect place for poetry’ was instrumental in founding the first festival. Since that inaugural event in April 2010, the Wenlock Festival has featured readings from a host of star names: Gillian Clarke, Roger McGough, Benjamin Zephaniah, Jo Shapcott, Andrew Motion…

The number of readers at Wenlock Priory on Saturday evening, including four guest performers from David Morley’s Outdoor Writing workshop. Sudden rain showers were a feature of the weekend (after all, this was England in April) and one of the most dramatic occurred towards the end of David Morley’s reading, which turned into something of a race against the elements. 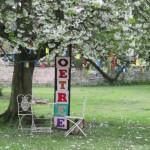 The number of Simon Armitage poems engraved on ‘Stanza Stones’ along the South Pennine watershed (one of which was the last piece performed at the 2014 Wenlock Festival). Working poetry into the landscape has played a significant part in the Wenlock Festival ever since Carol Ann Duffy’s specially-commissioned poem for the inaugural event was carved in stone by John Neilson. Five years on, the ‘Poetree’ in the grounds of Holy Trinity Church was one of the festival’s most spectacular sights.

For Nine Arches Press, who celebrated their fifth birthday and launched their ‘Maps and Legends: Poems to Find Your Way By’ anthology at the festival. Co-editor Jo Bell tweeted a picture of the Nine Arches team ‘debriefing’ at the Poetry Café: not a Housman’s Ploughman’s in sight, sadly. 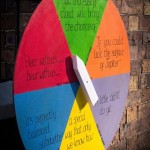 The number of ‘Dada Poetry Orienteering spinners’(including two at top-secret mystery locations), which encouraged festival-goers to compose their own aleatory verse using ‘obscure phrases from everyday sources.’ The Dada spinners used a series of randomly-selected phrases — a sentence from the Universal Declaration of Human Rights, half a line from Ryanair’s terms and conditions, a fragment found on a tea wrapper — and produced poems like this one:

What, we’re left to wonder, would Tristan Tzara have made of that?

“Apollo only showers acclaim and accolade/ on the hesitant, reluctant/ crop of Pakistan’s 9/11 English language novelists/ with their liberal credentials, hurt countenances…” Poem of the Week (July 13), by Raza Ali Hasan.

"come when the rains/ will not stain your/ lily-white shroud// where the sun/ will not freeze/ your blood..." Weekend poem,...