Five of the best readings

(in chronological order, introduced more or less in the style of Cluedo)

LUKE WRIGHT in the Edge Arts Centre with the lion 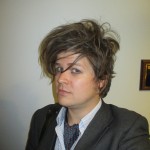 Described by The Skinny as ‘the future of popular poetry’ and by himself as ‘a swollen 12-year-old who’s put his fingers in the plug socket’, Luke Wright is one of the biggest names on the performance poetry circuit, and his set on the first evening of the Wenlock Festival certainly didn’t disappoint.

‘When a poet’s mind is perfectly equipped for its work,’ wrote Eliot, ‘it is constantly amalgamating disparate experience.’ In Luke Wright’s case, the disparate experiences being amalgamated included a first kiss and early 90s BBC series Lovejoy, refreshing contrasts to Eliot’s rather loftier examples (reading Spinoza, listening to the noise of a typewriter).

The ‘Essex Lion’ show moved fluently between comedy and tragedy, connected by an undercurrent of nostalgia — a yearning to return to those childhood days when everything seems possible (‘This show is all about those things that we wish to be true’). Talking to the audience between poems, Luke came up with most of the festival’s best one-liners, several of which have made their way on to the next page of this review…

GLYN MAXWELL in the Methodist Church with the creepy Disney film 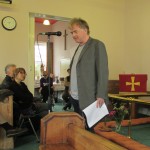 In 1994, Glyn Maxwell and Simon Armitage made a trip to Iceland, echoing the journey Auden and MacNeice had made six decades earlier. Maxwell and Armitage were key names in the ‘New Generation Poets’ promotion, but their careers have diverged: while Armitage was swapping poetry readings for accommodation along the Pennine Way, Maxwell was writing the libretto for an opera based on a book by Philip Pullman.

The two poets were reunited at the Wenlock Festival: Armitage closed the festival by reading to a packed crowd at the Edge, while Glyn Maxwell gave a more intimate performance to a relatively small crowd in the Methodist Church.

‘I only wrote two poems last year,’ he admitted, ‘and they were both commissions.’ But Maxwell’s work now seems to be all about quality over quantity: his yet-to-be-published ‘Disney’s Island’ poem, based on Pinocchio (‘My earliest memory of being freaked out by something in the movies’), recalled Eliot’s ‘Hollow Men’ in several places, and ‘The Snow Village’ was equally good, lending weight to Maxwell’s statement that ‘My poetry’s more religious than I am, as if the poems somehow know something that I don’t.’

FRIEDA HUGHES in the Pottery with the possible cannibalism 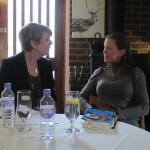 Frieda Hughes’ ‘desert island poems’ reading in Wenlock Pottery was surely the only festival event in which the poet began by pondering whether or not she’d be able to eat her audience. Musing on the possibility of escape from her desert island, Frieda suggested that she’d have to either tie members of the audience together to form a raft or remain on the island and eat them one by one. More pressing than the moral and ethical dilemmas posed by cannibalism was the absence of room service (‘There certainly wouldn’t be room service, which is a shame’).

Having discussed survival strategies with BBC radio presenter Fiona Talkington, Frieda Hughes moved on to her desert island poems… or, more accurately, her desert island poem. While previous castaway John Hegley had managed to squeeze eight poems into the 20-minute time slot, Frieda read just one: her own poem, ‘How it Began’.

From the opening lines (‘There was first the small sound/ of a metal wire snapping’) onwards, Frieda kept the audience in rapt silence as she discussed her struggle with ME and the role poetry played in her eventual recovery. She also discussed the influence of Ted Hughes and Sylvia Plath on her work: in her early twenties, the constant comparison to her parents caused her to stop writing; later, she came to realise that being ‘frightened of comparisons [was] a stupid reason to stop doing something.’ 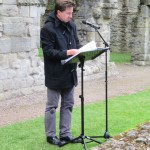 The Saturday evening event at Wenlock Priory, hosted by Gregory Leadbetter (director of Birmingham City University’s MA in writing) and David Morley (head of English and Comparative Literary Studies at Warwick) was the festival’s only outdoor reading. Perhaps unsurprisingly, it coincided with a torrential (but mercifully brief) downpour.

During a series of readings from participants in the outdoor writing workshop, sections of the audience were reclining on picnic blankets and at least one of the performers was wearing sunglasses, but the atmosphere changed dramatically as rainclouds began to roll in during Gregory Leadbetter’s performance. Off came the sunglasses, up went the umbrellas, and up stepped David Morley, throwing off his hood as he began his reading.

There was something almost Lear-like (the King raging against the elements, rather than the artist and illustrator popularising the limerick) about David Morley’s impassioned performances of his Wisdom Smith/John Clare poems against a backdrop of black clouds, the wind rattling the pages, the sudden hiss of a rainstorm…

FOYLE YOUNG POETS in the Methodist Church with the situational irony 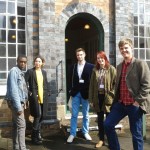 The last morning of the festival looked ahead to the future with readings from three Young Poet Laureates (Birmingham’s Lauren Williams, Worcester’s Holly Perrett and Shropshire’s Mia Cunningham) and four winners of the Foyle Young Poets Award.

If those two events are anything to go by, the next generation of poets are —without exception— extraordinarily consummate performers of their own work, as well as being refreshingly unafraid of stirring up controversy. Flora de Falbe observed that the venue (Wenlock’s Methodist Church) was ‘probably the most ironic setting for every poem I’m about to read’, while Richard Osmond provoked a certain amount of awkward shuffling in the audience when he introduced his first poem by announcing ‘This one’s about fingering’. Jay Bernard, meanwhile, introduced poems about her mother with, ‘A lot of my poems are about my family. They never read poetry, which is why I can get away with this.’

The future of poetry seems reassuringly bright, although it depends heavily on schemes like Foyle Young Poets. All four winners testified to the award’s impact on their careers, with Richard Osmond offering perhaps the most succinct appraisal: ‘The Foyle Award gave me permission to call myself a poet.’

“The line/ reincarnating as a fragile ceasefire margin,/ that moves to and fro with glacier tilt”
Poem of the Week (November 30), by Usha Kishore.

"come when the rains/ will not stain your/ lily-white shroud// where the sun/ will not freeze/ your blood..." Weekend poem,...