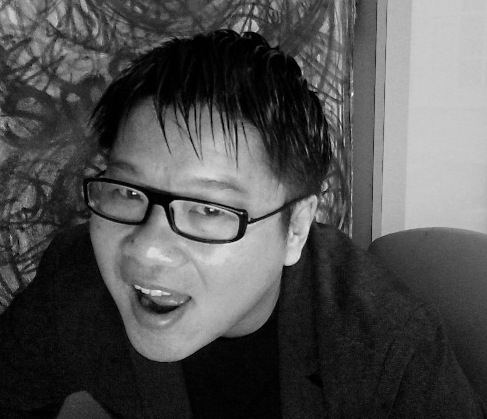 Last month, Desmond Kon Zhicheng-Mingdé won The Missing Slate’s inaugural Poetry World Cup, receiving 1295 votes in a tense final against Pakistan’s Mehvash Amin. Our Poet of the Month interview series continues with Desmond talking to the magazine’s Literary Editor Jacob Silkstone about the connection between working on the page and working in clay, the political power of poetry, and the importance of humour as ‘an empowering force’.

As an interdisciplinary artist, is there a strong connection between your work on the page and your work in clay? Chronologically, which came first?

Illustration and writing in the early years. Graphic design when it became lucrative as paid work. Ceramics came later, but happened fast and furious because the earthiness of the practice unleashed a very different side of my creative self. I do think there’s a lot of shape-shifting when the different practices dialogue with each other. And that happens a lot. The different disciplines inform one another in ways that have become almost second nature to me.

I’m usually not even conscious of the moment when it happens. Sometimes, the moment is sudden and abrupt enough for me to recognise the transition, like when I have to forcibly get off the wheel to pull a pen out of my pocket to write an idea down on whatever paper I can find. Or when I halt my design work, when some motif in it becomes something I want to write into a character’s life in a manuscript I’m working on.

In an interview with The Urban Wire, you’ve asked ‘how may a line in a poem animate itself into sculptured form?’ Can that process work both ways? If a poem can become a pot, can a pot become a poem (or, has one of your pots ever been the catalyst for writing a poem, the way those lines from Manley Hopkins were the catalyst for sculpting a pot)?

Yes, the process definitely works both ways. In the last chapter of my new book, ‘I Didn’t Know Mani Was A Conceptualist’, there are allusions to clay and its workability. Here is one instalment from the sequence:

“If you can’t find my hairdryer,” the Second Dakini says, “there’s the Bradley in the restroom.” The Bradley can be meaningfully worked into the Third Dakini’s slab of brick clay, now tightly wrapped in plastic to help keep in the moisture. “Clay reconstitutes itself,” the Second Dakini seems insistent on making such gendered statements, as the Bradley tosses its lustre, and takes in rust like a new leavening. “Clay is an involuntary displacement too,” the First Dakini radiates like a crystalline rock. “Clay will give you five handles and rhetorical instruction like cup-and-saucer landforms.” But the Third Dakini has escaped through the coupled roof, into the incumbent on a slant, the cant of the naysayers just as conceptual, just as au courant a sound. On the far right, that temple in Thailand is gaining excellent karma, its million green bottles hanging on the wall, and if one should accidentally fall, the Indian Ocean would churn, heliodor again.

I guess we’re talking about ekphrastic work here, when one artform inspires the creation of another. I find a lot more intersection between visual arts and literature. Sculpting, at least for me, holds a very special place. It also requires a great deal of time, something that doesn’t always avail itself to me. I’m actually working on a very exciting ekphrastic project right now. I’m editing and managing the “Eye/Feel/Write” special program at this year’s Singapore Writers Festival. Commissioned by the National Arts Council, the program has invited ten writers — these include Robin Hemley, Joshua Ip, Isa Kamari, Alvin Pang, Tan Chee Lay, Jollin Tan, Edwin Thumboo, Ramanathan Vairavan, Yeow Kai Chai, and Ovidia Yu — to write ekphrastic responses to ten artworks exhibited at the Singapore Art Museum’s “Medium At Large” exhibition.

Several of the writers have given me such beautiful insights into their creative process, that I feel compelled to share them here. Yeow Kai Chai decided to work on Ho Tzu Nyen’s audio and visual installation, “The Cloud of Unknowing”, which represented Singapore at the 54th Venice Biennale in 2011. Of his response poems, Yeow Kai Chai had this to say: “In these three inter-linked poems, I’d like to explore the fluidity and transience of one’s identity; how porous the wall between reality and art is, and the ease with which all of us flit between personas in our everyday lives. Characters disappear and re-emerge, and words echo and ricochet. We make things, and ourselves, up along the way. In my fanciful mind, ‘The Imposters Triptych’ is an update of those classical altarpieces: propped up as a foldable contraption, with each panel echoing one another, and forming a larger picture — but of what?”

Joshua Ip was tasked with interpreting “BluRay_B” by Osang Gwon from South Korea. Joshua has also written about his experience. Here it is: “In direct response to the artist’s cheeky modern take on a classic form, I decided to employ the most traditional and dignified of Southeast-Asian literary forms, the liwuli. An 800-year-old poetic form derived from Southeast-Asian literary and rhetorical traditions, the epic beauty of the liwuli has only recently been rediscovered. I also constrained myself in thrice attempting the more difficult variation of the form, where a liwuli and its inversion, an iluwil, are juxtaposed to form a liwuliiluwil.”

I’m interested in exploring the rather anarchic humour that seems to be present in a lot of your writing. Even in the title of the poems we published recently, ‘…Wittgenstein’s whoopee cushion‘, there’s a fine balance between heaviness and lightness. I’m wondering whether humour can actually perform a very serious function: the necessary function of standing up to power…

I’ve never been asked this question about my work, and I like how I’m needing to think through this properly even as I’m writing to you.

Humour can be a very empowering force… bringing into relief what power might attempt to conceal
I have an awkward sense of myself in relation to humour. For one, I’m terribly uncomfortable with public humiliation, probably because my adolescence is marked — and scarred — by various occasions of traumatising embarrassments. I was very out of place, for years actually, and only started becoming a lot more comfortable with my self, whatever that means, in my mid-30s. That’s a really late acceptance, and a bit dismal and pathetic. To add, the way I sort of found a kind of cavern to house my personality was to crouch under the big, unwieldy cloak of postmodernism. To say one accepts oneself as a postmodernist is terribly ironic, which only underscores the point.

I remember discovering Wayne C. Booth’s ‘A Rhetoric of Irony’ in 2005 or 2006, all while the very notion of irony seemed ready to be jettisoned out of fashion’s window post-9/11. It was as if the new millennium was starting with the strange quandary of denying what seemed undeniable. Up till that point, I’d always viewed irony as one of the most sophisticated kinds of literary genius, the way Anne Hathaway’s Austen defends its use in the film Becoming Jane. But there’s that scene when Ian Richardson’s Lord Chief Judge character tries to demystify her understanding of its virtues. Of the dark nature of the ironic, a sort of bared-fangs-behind-wide-smile moment. That made me rethink irony completely.

Even as I’m writing this out, processing your question, I’m intentionally deciding against using the crutch of others’ words, and being as plainspeaking as possible about my relationship with humour and comedy. Channelling this kind of bare-bones narrative is the closest thing to confessionalist writing I’ll ever come to. I feel sort of lightheaded — not entirely because of the bottle of red on the table — like Hafiz, whose poem about laughing with God made me smile all those years ago. There was a softness yet levity to his lines. I’m usually so happy burying my emotion — difficult and evasive, most of the time — in metaphor because allusion and the crafting of it seems to help most in my confrontation with my own person and issues.

In your question, there’s the more important matter of the public function of humour. Yes, humour can be a very empowering force in bringing into relief what power might attempt to conceal or sweep under the carpet of nonchalance.

"There’s a mauve place you’ve forgotten,/ where you mothered dogs for a living..." Poem of the Week (August 5), by...