Charles Pinion has gained cult notoriety for his unofficial trilogy of transgressive, art-schlock horror films — all self-distributed, fiercely experimental, and shot using analog video technologies. With the forthcoming release of ‘Aztec Blood’, Pinion finally returns to the world of psychotronic horror — now in 3D! We discussed his new film, its origins, and the transition to digital filmmaking.

Aztec Blood is your first feature-length film in eighteen years. What was the impetus for your return to filmmaking after such a long hiatus?

I would say I never actually went on hiatus (though I am a big believer in sabbaticals). My most recent narrative feature We Await premiered at the Chicago Underground Film Festival in 1996. Afterwards, back in San Francisco, I spent several months writing another feature called Thousand Eyes. An L.A.-based producer got in touch with me — he had seen Red Spirit Lake and We Await — so I started visiting LA now and then to meet with him and discuss potential projects. 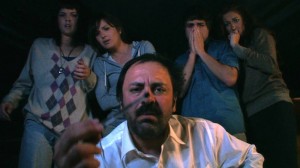 At first, he wanted to do a straight-up re-make of Red Spirit Lake. This was for no money up front. I would essentially be doing a re-write of my own movie, Red Spirit Lake, “on spec.” I had no interest in doing such a thing (Red Spirit Lake was only a few years old at that point), and especially for no money. What I did agree to do was write a script that would have similar elements to Red Spirit Lake: a remote location, a vulnerable woman, her friends, ghosts, and of course, nudity. This became Haunt, on which I collaborated with my friend Michelle Barnes. The story went along pretty well, and had some nice creepy and spooky elements (that I’d like to re-visit someday). But it was also a somewhat staid, commercial version of Red Spirit Lake. Not remotely transgressive. There would be no fisting in Haunt!

I finally moved to Los Angeles, escaping with some reluctance the dotcom-booming San Francisco that had been my home for six years. In LA, I edited (and shot parts of) Two Headed Cow, a documentary about legendary Flat Duo Jets guitarist Dexter Romweber. I also edited a documentary about Kurdistan called Thank You for My Eyes. As Chezerez Jourdain, Jordan Ellis and I have co-created several music videos and short films, and have a music documentary in mind for the near future.

Filmmaking is a complicated and uncertain process. The bottom can fall out of any project, long before money gets involved, and then it can fall out again. Basically it can fall out any time. Anything can go wrong. The story might just not work. The location might not be available. Etc. Most filmmakers have several projects going on, on different burners. At any point the gas can go out on one of those burners, and you’re left with a stew of incomplete, “wasted” effort. In the world of independent movies (i.e. meager-to-no financing), it’s easy to get discouraged. You need other projects to keep you going.

Meanwhile, one must make money to live. Toward that end, I edited a few Canon camera-training DVDs, written and hosted by Greg Salman.

How was Aztec Blood conceived? What were the writing and preproduction processes like?

In 2004, Greg Salman, my Canon training DVD employer, approached me with the title American Mummy. I liked it immediately. I was surprised that it had not been used yet. We went through some ideas — a Native American mummy? A Revolutionary War mummy? — until we finally settled on an Aztec mummy. We have since changed the title to Aztec Blood, but its original title was the jumping-off point for the project’s evolution.

We wrote it over a few evenings over many months. We had the movie cast and ready to shoot in 2006. We were going to shoot it quick and (literally) dirty, living in the same tents that the characters lived in, for ten days or so. Just knock it out. We were going to shoot on a then-cutting-edge Canon HD camera. But financial issues came up, and we had to pull the plug. This is a common story in this crazy business.

Periodically Greg would check in with me, and we would talk about the movie, to keep it fresh in our minds. One day in 2010 the money came through, and we began pre-production on Aztec Blood, with a big difference from its earlier incarnation: it would be shot in 3D.

Aztec Blood marks a transitional moment in your career, as it shifts away from the analog video technologies used in your previous films — VHS, Hi-8 video, etc. — and marches headfirst into the world of Digital 3D. What have been the benefits and challenges of making this change? In particular, why the shift to 3D?

I was initially resistant to shooting in 3D. It’s hard enough to make a movie without the strictures of shooting stereoscopically. However, I am a long-time practitioner of what Kembra Pfahler calls Availablism. As an artist, I use what is at hand. A condition of this investor’s interest was that it had to be shot stereoscopically. We had access to 3D cameras and, as a result, the movie is in 3D. I was really not interested in shooting it in 3D, but that was the deal. I love the fact that it’s in 3D now, but in a sense, I shot myself into a corner, because some of the shots only work in 3D. They work spectacularly, mind you — but only in 3D!

One reason so many contemporary movies are “conversions” (shot in 2D but then showered with money to become fake 3D, via software) is because it’s really challenging to shoot in 3D.