We see a woman dressed in white, her hair gently flailing with the breeze as she steers her boat through a peaceful stream of blue-green water. The awe-inspiring opening scene of Dukhtar makes its grand ambitions clear. Afia Nathaniel’s new film is the latest in a new wave of Pakistani films driven primarily by the vision of filmmakers and their desire to tell stories beyond the usual commercial motivations. 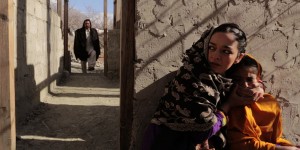 The film follows Allah Rakhi (Samiya Mumtaz) and her daughter Zainab (Saleha Aref) as they run away from their home before Zainab’s marriage ceremony, escaping her fate as a child bride. Zainab’s father Daulat Khan (Asif Khan) has been pressured by powerful tribal leader Tor Gul (Abdullah Jaan) into accepting his marriage proposal. When Allah Rakhi finds out, she decides that she will not let her innocent daughter be forced into marriage with a man several times her age and cleverly orchestrates their escape. We are plunged straight into the action as the mother and daughter, joined quickly by carefree truck driver Sohail (Mohib Mirza), are chased by Tor Gul’s henchmen and Shahbaz Khan (Ajab Gul) throughout the film. The journey leads us from the mountains in the North to the plains of Punjab and eventually concludes at a festival in Lahore.

Dukhtar begins with the verve of a thriller, boasting spectacularly shot car chase scenes filmed on the Karakoram Highway with a gorgeously decorated truck at their centre. Here, Afia Nathaniel masterfully uses close ups of the actors inside the truck and the expressions of anxiety on their faces to create a claustrophobic atmosphere of fear, occasionally zooming out to a brief wider shot that reveals the majestic landscape in which the scenes take place. This revelation creates an element of wonder, placing the struggle of the characters in the larger cosmic scheme. One couldn’t help contrast this with certain scenes in Once Upon a Time in Anatolia where the director Nuri Bilge Ceylan uses slow long takes in conjunction with very wide shots of the desolate Anatolian steppes. The depressing yet beautiful landscape is used to reflect the mood of the characters, while the camera only briefly rests on any person at the end of these scenes. Once the chase scenes end the pacing becomes abruptly slow, never again reaching the dynamism and excitement of this part of the film, and the overall experience suffers as a result.

While Allah Rakhi’s motivation to save her daughter from a fate similar to her own is explicit, it isn’t quite clear why Sohail initially decides to help Allah Rakhi and Zainab to the point where he keeps risking his life for them. Is it because Sohail feels he has nothing better to live for? Or does he see some of his departed wife in Allah Rakhi? While Sohail’s attraction to Allah Rakhi and affection for Zainab — portrayed through scenes of them playing together — is used to explain his motivation for continuing with them on their journey, the question is never adequately answered.

Samiya Mumtaz and Mohib Mirza give terrific performances, subtly illuminating the repressed attraction between Allah Rakhi and Sohail, but the true star is Saleha Aref as Zainab. Aref has the ability to steal scenes with merely her facial expressions and does so quite often in this film. Director Afia Nathaniel deserves a lot of credit for bringing out such an assured performance from the young actor. If an actor like Saleha were in Hollywood, one would have some certainty that you would see more of her, perhaps even in films where she would be the lead. The state of Pakistan’s film industry means we don’t know how long it will be, if ever, before we will see her in a film again. And that is a truly depressing thought.

Dukhtar’s feminist leanings are there to for all to see. It’s a story with two female leads based around their relationship as mother and daughter. Their characters are given depth, emotions and agency. Allah Rakhi’s fierceness and determination drives the film’s narrative. This is a risky story to tell in a patriarchal country like Pakistan. It’s no surprise that Afia Nathaniel struggled to get local funding for the film and had to rely on foreign sources. However, there are limits to its feminism as Sohail constantly has to play the role of “savior”, eventually trying to save Allah Rakhi from her own emotionally driven decision to see her mother. Hopefully Dukhtar is a stepping stone to Pakistani films that break out of narratives which still rely on men to act as saviors of emotional women.

At times it feels as if the director is unsure of the kind of film she wants Dukhtar to be: a road trip thriller, a meditative love story or a story of feminist awaking. Sometimes this kind of uncertainty can lead to fresher ideas, pushing the lines of cinematic convention, but in the case of Dukhtar one can’t help but feel this uncertainty causes the narrative of the film to drag. The use of levity in Dukhtar is also at times inopportune and distracts the viewer from feeling the true weight of what would otherwise have been emotionally intense sequences. In these moments, one can’t help but feel that the director is trying to make the film more accessible for wider audiences. The ending of the film feels like another such moment, revealing a lack of courage in failing to follow through with the narrative set up that precedes it. The clunky simplicity of some of the dialogue is also a let-down.

The fact that a film like this exists is still a marvelous feat, however, and it’s a great showcase of director Afia Nathaniel’s talent. One can’t help but look forward to her next endeavor, where hopefully she won’t have to pay so much attention to making sure the film is made, focusing less on its production and perhaps not writing the script either. Where Dukhtar truly shines is its cinematography. This is how we know Pakistan can be filmed; from ruggedly handsome mountains to colorful, vivacious Lahore, it manages to capture these places in all their awe-inspiring splendour. At its best, Dukhtar allows us to imagine the kind of cinema Pakistan can have: one that can mesmerise, leaving us enthralled in wonder; one that begs to be engaged with seriously. It allows us to dream.

Ali Zubair is a freelance writer interested in film and television.

“Twenty-three friends and relatives to serve. Resentment, petty rivalries, and open derision silently put away for a few hours of dishonest civility.” Story of the Week (September 6), by Rob Ross.

The earth had stopped turning

"I, who surrendered there beneath the cocoa trees/ where the elephant rots/ oh God in heaven..." Poem of the Week...