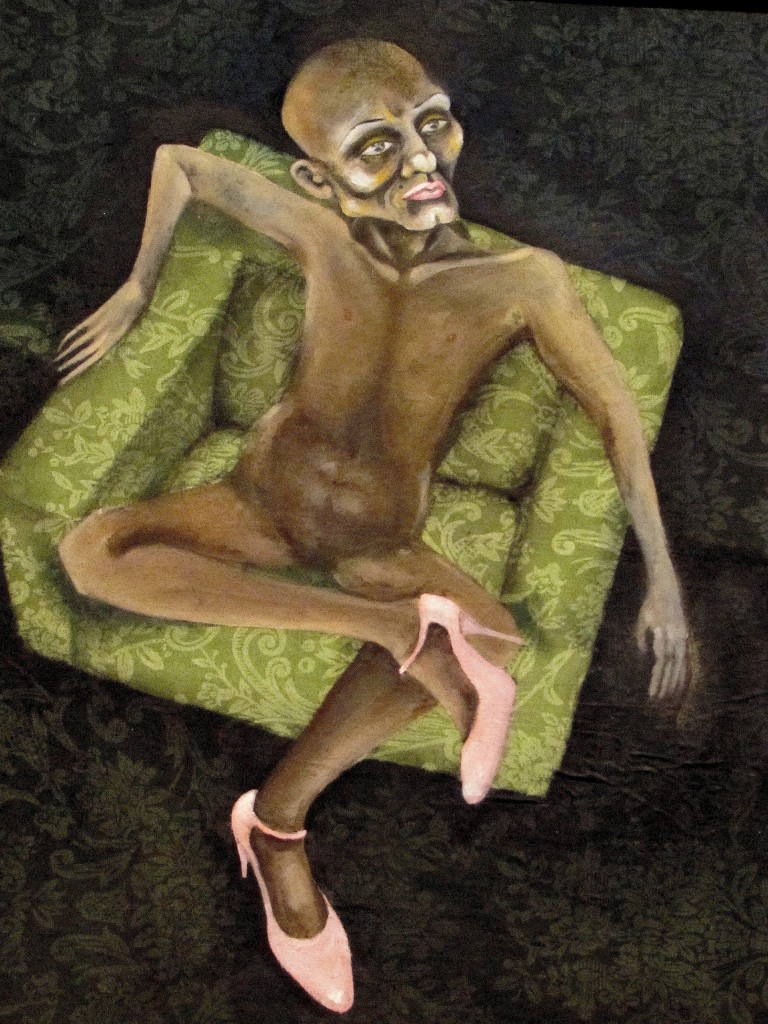 Behind The Wall of Sleep, by Amra Khan Courtesy: ArtChowk

Translated from French by Edward Gauvin

As he did whenever he stayed at Nieuwpoort, Frederick slept like a child, but without fail, whether his night had been short or long, he woke with the dawn. Rising without a sound so as not to bother Juliette, he slipped on a dressing gown and went into the living room. The broad picture window gave out on the beach and the sea. Frederick’s gaze promenaded from one end to the other of the vast landscape, bathed in the still-uncertain first light. Actually, his gaze slowed for the moment it took to trip over the unmissable: a chair, just across from his building, a very simple chair in the middle of the deserted beach.

A curious thing. It was there every morning, always in the same place, not sadly stranded between two high tides, but set before the sea as if ready to serve. A cane chair—stiff, high-backed, all the more out of place for how intact it looked.

Stranger still: the chair was only there till it wasn’t. This happened more or less quickly, and always unexpectedly. It took advantage of a moment’s inattention, a brief absence on Frederick’s part, to vanish, so quickly that he’d never actually seen it vanishing. Every morning for two weeks now, the chair had escaped him. He would have had to keep an eye on it without let-up, not look away before the sun was fully up, but he had neither the patience nor the leisure.

Ponder such questions at length, and your head ends up flustered. In certain particularly deserted spots, certain seasons when the light of dawn was particularly uncertain, couldn’t a chair be supporting some invisible presence?

You get out of bed, head still foggy with reverie, and reality offers you a riddle. So be it. But the same riddle, stubbornly, day in and day out? Who brought the chair promptly every day before five? Frederick wondered. Who brought it, and who took it away? Why? If it had an occupant, at least… But that empty chair, sometimes there and, in a blink, sometimes elsewhere—but where?—emptier than the beach and sea and sky all together!

Ponder such questions at length, and your head ends up flustered. In certain particularly deserted spots, certain seasons when the light of dawn was particularly uncertain, couldn’t a chair be supporting some invisible presence? One morning, as soon as he leapt from bed, without even taking the time to slip on a coat, Frederick rushed from the apartment. He’d had a flash of inspiration: all he had to do to find out if the chair was occupied or not was go and sit on it. Pure logic. Unfortunately, in the time it took him to go down five floors and cross the dike, the strange seat was no longer there. Once more, it had evaporated into the dawn.

How could he surprise the chair? With Juliette’s help? But she was sleeping so soundly. My God, how? Frederick could think of nothing else, even at work, such that his punctuality began to suffer. Just then, he recalled he was also a shutterbug, and quite capable—why not?—of capturing the chair in his telephoto lens. Hadn’t even ghosts been photographed? He would subject the roll to powerful develops, he’d stew it till it gave up all its secrets…

Despite the uncertain light, the photo was perfect—but disconcerting. A few square feet of boring beach had become a lunar landscape where the modest work of sandworms took on the pyramidal proportions. As for the chair… not the shadow of a trace! At best, Frederick thought to make out, among other impressions, the symmetrical prints of its four feet, but Juliette saw nothing. Now he was not far from hating the chair, or rather, since that was absurd, hating whoever was using the chair to mock him, day in and day out. Showing it, and hiding it, so he would lose his heat. A veritable campaign of terror, tantamount to witchcraft… From the very depths of his being, primitive images rose to mind, visions of virgin wood, and that night, once darkness had fallen, he went out on the beach and dug a hole in the sand at the very spot where the chair would normally appear. A deep hole. He concealed the trap with thin wood lathing and scraps of a hedge, over which he perfidiously spread a layer of sand. Then he waited for dawn, seeking vainly after sleep… a few hours later, in the uncertain light returned at last, what a joy it was to see the pit gaping! What a prize!

The chair stood at the bottom and looked at him. He grabbed it unceremoniously. I’ve got you this time! He set it down brutally on the sand and, because it was unsteady, pitiful, he started laughing and launched a great kick at it. Defeated, its leg broken! Ha ha! As he was leaning over the hole, intrigued by a dark stain—it looked like blood—he felt a sort of panic, the beginnings of vertigo. He straightened, took a deep breath… the chair? It had vanished!

Rage overcame him once more, a genuine thirst for murder. This time, he’d crush it! Over there, that shadow crossing the breakwater… He started running. It was indeed the chair fleeing him lopsidedly, its great back shaking like the clapper of a bell. Ridiculous! Frederick ran faster, the distance between them shrinking as he watched; already both his hands were reaching out to grab and break it!

What happened next was terrible. The chair came to a sudden halt and, in the same movement, swung around. Too late to dodge it! Carried on by his charge, Frederick caught just a glimpse of the menacing horns, sculpted in lion’s heads, before feeling the impact and the bite that ripped his belly open. The world toppled with a great cry. Then, silence. Eyes wide open, pinned to a deserted beach, his belly sticky with suspect warmth… all he could see now was the sky. Never again would he see anything else. But the dawning day, the triumphant light of summer, inexorable as pain.

Jean Muno is among the best-known of Belgium’s Silver Age fabulists, heir to Jean Ray and Thomas Owen. His ever-wicked humor skewers the absurdity of the suburbs and their spiritual emptiness. The author of nine novels and four story collections, he received the Prix Rossel in 1979, and was a member of Belgium’s Royal Academy of Languages and Literature. His work in English is forthcoming in Year’s Best Weird Fiction from Undertow Books.

Edward Gauvin has received fellowships and residencies from PEN America, the NEA, the Fulbright program, the Lannan Foundation, and the French Embassy. His work has won the John Dryden Translation prize and been nominated for the French-American Foundation and Oxford Weidenfeld Translation Prizes. Other publications have appeared in The New York Times, Tin House, World Literature Today, and Weird Fiction Review. The translator of almost 200 graphic novels, he is a contributing editor for comics at Words Without Borders.