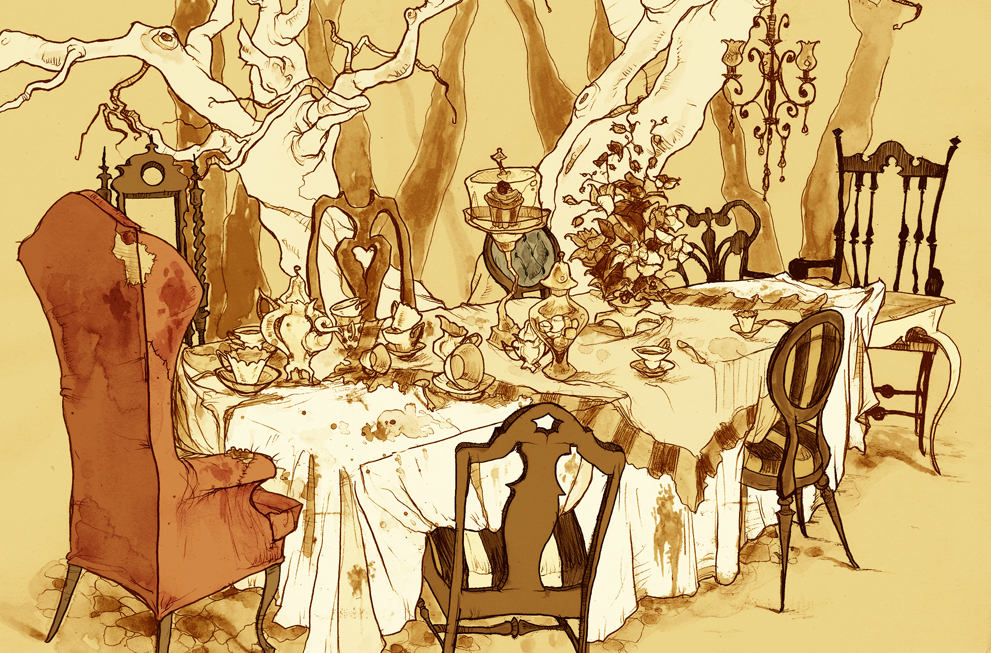 Swine flu, the spoiled brat, messed with Wei’s big feast. That parvenu of outbreaks crippled supply, sending prices into the ionosphere. Wei deserved a ginormous glut, after all, he was born in the Year of the Pig. Ditto for his son. He had hope, but time was against him. After word broke that porky was on the verge of extinction, Wei couldn’t wait a nanosecond longer. He split from work, faked a stomach bug. When nobody was looking, he stuck his finger down his throat, and puked all over his loafers. Then he rushed to Gangbi’s for a hunk of pork. When he got there, it seemed everybody had the same bright idea. Everybody wanted to live large, larger. Nobody cared about the risks. The mad pace of buyers suggested a looting. They loaded up on chops, thighs, knuckles, kept piling it into their carts. They pointed, grimaced, groaned, and only when they seized their precious meat, did a glaze of jubilee cross their cheeks. The last shop Wei checked out, three people got trampled to death. Here, the line snaked eight lengths and slithered out the door. Waiting, even under the scorching sun, never bothered Wei, but, cooped up in a stuffy shop like a penned pig, with the distinct possibility that he was too late— that they’d run out of pork— sent Wei into a snit.

The butchers doubled over in laughter and heave-hoed Wei’s hulking pig. They offered him a dwarf that could fit in his pocket. No thanks. He needed the blimp to soothe his fat pride.
They’d run out, you betcha, and when they did, gadzooks. His wife and father-in-law would grill him. No more cheapskate. The new Wei had something to prove. Two old ladies, just ahead of him, probably sisters or bridge partners, got into a vicious argument over their cuts. Maybe two hours passed before Wei had his turn. His feet were aching and his hip joints popped as he bellied up to the counter. Yessir! They had a whole pig ready for him, but it took four burly butchers to raise it. How on earth would he lug it home? He begged the butchers to help him, but they were glued to their cleavers, and the line kept snaking. Can anybody help? The customers eyed Wei’s giant pig then looked at him with a confluence of loathing and lust. The butchers doubled over in laughter and heave-hoed Wei’s hulking pig. They offered him a dwarf that could fit in his pocket. No thanks. He needed the blimp to soothe his fat pride. He’d give up his plate if his family saw him carrying the prize. He asked a dozen people, but nobody wanted to help. Eventually, a scrappy young man, maybe a student, offered a hand. He wouldn’t take a penny, the young man wanted to prepare the feast. “Sure, sure,” Wei told the young man. He would’ve agreed to anything to get help, but two scrappy men wouldn’t get far. A gray bearded, scarecrow of a man, in bare feet, joined them. They waddled off like a three-legged mutt, and dropped the pig several times. Maybe it was because they looked so pitiful or they appeared to be an easy target, but they were summarily greeted by every stranger that crossed their path. Most were much better specimens, longer-limbed with broader shoulders and, generally speaking, tanner skin. Wei kept enlisting troops, they raised the great swine like pallbearers hefting their beloved aunt or as soccer champs carrying their hero goalmaker. Wei must have promised a dozen pigs as payment, but then again, the great swine could fill up a whole sty, its bulk kept ballooning. Halfway home, their squad had morphed into a platoon. They were salivating at the thought of the first bite, and each man shared a juicier recipe than the last. By sunset, he had a battalion lugging the beast. They were spread out so wide that they all didn’t fit on the road, some had to wade through the river like donkeys while other men hupped on the rolling hillsides like billy goats. They came across farmers whose untilled land was heartbreaking to see, and they joined too, and so did the stragglers and hobos, loping the countryside. Then the tide turned. Wei didn’t want any more hands, but they kept coming and they practically threw themselves at Wei. Really, at the pig. They made outlandish promises, offering Wei new teeth, jade necklaces, even a piano. A traveling salesman offered Wei a bottle of Grand Cru Échezeaux. Soon Wei bragged to his regiment that he ate more rice than anybody south of the Yangtze. The scarecrow next to Wei claimed he got by on the least. They sang old tunes and marched in perfect rhythm. Just before dusk they creeped up to Wei’s home, the pig’s snout rose high above the chimney, and the squiggly tail whisked off beyond the dale, passed the rolling hills. His wife, holding a bucket, had an incredulous expression as she peered out at the army before her— the moonbeam illuminating the wonderpig.

“Fire up the spit,” Wei told her. “The party has just begun.”

John Gorman spits wine for a living. He enjoys spelunking, Cary Grant flicks, grilled cheese sandwiches, and a good game of Mancala (preferably in sand). His work has appeared in Monkeybicycle, Newtown Literary, Apt, and Writer’s Digest. His debut novel Shades of Luz is published by All Things That Matter Press. He snagged his MFA in Creative Writing from Pacific University.

“Theorem:/ we will liken our souls/ to a pair of winged horses.” Weekend poem, by Imogen Cassels.

A Change from Within

"The goal was simple: to use art as a medium to inspire change by encouraging prisoners to pursue a creative...