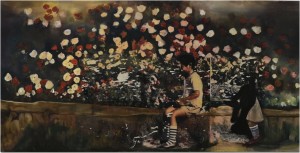 The alley smelled of incense and coffee. People walked past us, looking sleek and happy. Through the huge glass windows, we could see the cozy interiors of the shops displaying artwork and jewels.

“This place is not like the rest of the city. I feel like I am in one of those exotic tourist spots. Wish we two had put on anything but these bright boho skirts,” Kat said.

“It is designed to evoke that feeling – an expats’ hub with a native flavour. Three years ago, it was a potters’ village. They used to sell idols and toys here. Then somebody realized the potential of this spot and developed it to this glittering bubble of comfort. Now the old potters live in a slum near the railway station. We went there for shooting. You remember?”

Kat nodded; looking at the street lights in the distance.

I met Kat five months ago at The Home, an organization working for street children. She came from Brussels to make a movie about destitute children and I became her on-location collaborator.

“I am going to miss them… all the children I worked with. At first, I felt they learned to forget the awful things that happened to them. They seemed happy – always trying to hold on to the brighter moments,” Kat said turning to me. We were sitting on a pavement beside the cigarette shop. With the onset of night, the place became livelier with dance club visitors.

I thought about little Jai, one of Kat’s ‘children’. On the last day of filming he had invited us home – a shabby tent outside the walls of city park. We sipped tea sitting on a mat trying not to look at the open drainage on the side of the tent. Jai showed us a little notebook – his book of dreams. I read one of his entries in the first page.

When I am big, I will be a police man. Not the bad policeman who beat children, but a good policeman. I will buy a house far from here, in a place where dirty water won’t come inside when it rains.

Jai said he was ten but he looked older with his sunken and pale face. When we said goodbye, Jai gave us the notebook as a parting gift.

“Do you want a smoke?” Kat asked walking towards the shop, while heads turned. If it was not for the project, we would have hardly become friends. I have a prejudice for people like her who dress, talk and walk with effortless grace.

“At times, it is important to make a good impression on others which may expand your horizons and lead you to exciting possibilities. So in that way, my pretentiousness is justified,” Kat said with a shrug of her shoulders.

“But don’t go so frank about it. That will ruin the entire act.”

We laughed a lot during those first meetings at The Home.

“Get ready for the green pigeons,” I tried to joke while lighting up the cigarette. Last time we came here a flock of green pigeons had appeared on the nearby treetop when we lit up. They formed a surreal image – those green birds with their unnaturally bright yellow legs.

“I doubted the cigarette for a minute when I saw them. They will probably be flying back home now. In a way, going back home is frightening. Everybody around is so familiar that a slight change in you can create a big shift in relationships.”

I looked away. She knew it was a bit different for me. I was from a home where people didn’t care much about others’ existence. A place where I felt orphaned as a child, abused as a teenager and outcast as an adult. It was easy for me to bond with the children we were filming. Kat considered it a wonderful talent.

“You can make them open up within no time. How do you do it?” she often asked me with amazement.

I am going to miss them… all the children I worked with. At first, I felt they learned to forget the awful things that happened to them. They seemed happy – always trying to hold on to the brighter moments

“You are the best thing that happened to this project so far.”

In truth, I and those children had a lot in common, same past which differed only in the degree of severity.

Chetan and Mittu were my favourites among Kat’s children. We first met them at the traffic island on our way to the slum. Mittu came to us with a bunch of roses.

“How much is it?” I asked with a smile. He picked one flower from the bunch and held it between his teeth. Then he raised all the fingers of his hands.

“So it is ten rupees for one?”

Kat fished out a chocolate from one of her bags and gave it to him. He replied with a smile that brightened his large brown eyes. Chetan approached us with a questioning look.

“What do you want?” He put his hand around Mittu’s shoulders.

“She wants to teach you how to take pictures with this camera,” I said, introducing Kat. “Then she will make a movie about it. Do you want to join in?”

“No. But we will provide food on the sets”

“We can’t do it. I have to sell flowers during the day.”

“Alright, maybe she can quickly show how to take a picture.”

Mittu grabbed the camera from her hands. With a few gestures he made us sit near the pavement in a neat line and clicked the picture. It’s a hilarious shot- Kat with her tongue sticking out, me trying to pull her hair and Chetan in the middle with a serious expression. I noted down their details for The Home’s register. At times, the organization provided some assistance to the children who associated with them. Chetan came to the city when he was ten.

“I always had to work at home. Father used to beat me up for not doing all the chores. One day, I met an older boy at our local market who told me about this place. He said it is a great place with cinemas, vehicles and neat houses. So I ran away with him.”

Chetan had found Mittu near a garbage pile during his second year in the city where he became a street vendor selling flowers at the traffic islands. He took pity on the little child resembling a soft toy thrown out of a window.

“Hi, Do you have anybody with you?” he asked. A voiceless sob was the answer.

“I am Chetan. Do you want anything?”Chetan asked again. Mittu covered his face with both hands.

Unsure of what to do, Chetan bought some momos from a nearby tea shop and gave it to the child.

“It’s good. Have some,” he said and started to walk. Mittu followed him silently. So Chetan took him to the traffic signal where he sells flowers and then to the shop corridor where he used to sleep.

While Chetan talked, Mittu stared at Kat’s golden hair with wonder. She stooped her head to allow the shiny locks to fall on his little palms. He smiled that radiant smile conveying joy and amazement – the only medium through which he could communicate his feelings. Two days later the boys joined with the other children for filming.

“Let us go and get some dinner. I have to leave a little early. Half of my luggage is still unpacked,” Kat said finishing her cigarette. We walked to the food outlets near the road side. I felt sick. It might be the loud music pouring out from the neighbouring club. Kat enthusiastically pondered through the menu.

“Spinach curry with seasoned vegetables. That sounds delicious. What are you going to have?”

I sensed a growing uneasiness in my mind – an unreasonable animosity towards my friend. It started on the day we conducted an exhibition and film screening to celebrate the completion of the project. The event went well making a couple of news headlines.

"I couldn’t save him and I couldn’t care for him either. HIV took both options away from me." Denzel Xavier...