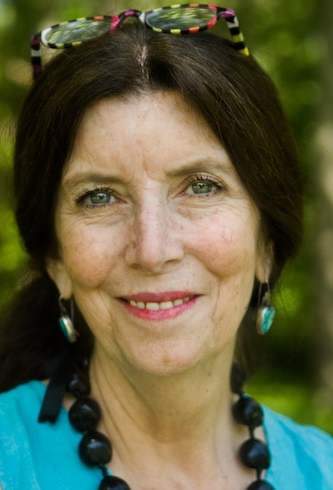 Nancy Anne Miller has lived in Connecticut and England, but her poems are informed and shaped primarily by her birthplace, Bermuda. As she explains to Afshan Shafi in the latest instalment of The Missing Slate’s Poet of the Month series, “being surrounded by an ocean, on an island where one could never be more than half a mile from the sea, gave me this profuse and profound sense of the force and power of a cyclical movement.” Her work uses that cyclical force and power to disrupt traditional assumptions about the linearity of the lyric poem, challenging the domination of “what Woolf would refer to as the masculine sentence.”

The first thing that strikes me about your poetry is your use of lush heightened imagery.  Does the use of the metaphorical hold more weight with you than the declarative? Do you think this is a result of your formative education, surroundings, or is it just an intrinsic inclination?

I have a real intention with my use of image metaphor. Firstly, I want to break down linear intentional poetry or what Woolf would refer to as the masculine sentence. I’m interested in feminizing language by creating a circular movement throughout the poem. I intend to disrupt the idea of the poem moving towards a climactic end. I want image metaphors to make the poem radiate out across the page, shimmer with many meanings.

I am certain being surrounded by an ocean, on an island where one could never be more than half a mile from the sea, gave me this profuse and profound sense of the force and power of a cyclical movement.

There is a reaching in image metaphors of one thing towards another. W.S. Merwin said, “Everything is a metaphor for something else.” Hence, image metaphors reach out towards a community of things which is also a feminine arc and notion.

In Bermuda my surroundings were so spectacular, they had to inform and shape my sense of reality. (It may be why Surrealism never impressed me, as I always think reality is strange enough.) Therefore it seems only right then that my tools match it, match the task of representing the opulence and the strangeness of a semitropical landscape. Not to mention jumpstarting the imagination of the reader who may have filed Bermuda away in a tourist brochure category.

Every poet writes from exile. For myself, it took me a long time to acknowledge I was an immigrant.
The visual aspect of your poems brings to mind a certain type of ekphrastic poem. Frank O’ Hara has said that “the verbal elements [of the poem] are not too interesting to discuss although they are intended consciously to keep the surface of the poem high and dry, not wet, reflective and self-conscious. Perhaps the obscurity comes in here, in the relationship between the surface and the meaning, but I like it that way since the one is the other (you have to use words) and I hope the poem to be the subject, not just about it.” Do you think the visual and the textual are of natural interest to each other? What are the benefits to each of this interaction? What do you feel poets can learn from painters? Are there any artists that you particularly admire?

When the visual and the textual are combined in a work they can both die an early death, and are too often a disastrous combination where the visual ends up illustrating the poem or the text ends up storying the visual. That often stops being of value at a children’s book level I would say. However, the two can inform each other as mediums. I have learned from my visual arts background and from painting particularly how to build a poem, not just write a poem. I often begin my poems with a few image metaphors which seem to be located in a fertile place that could become a poem. The text, lines, or the narrative then come out of those metaphors which I have essentially unpacked on the page. This is not a method of writing where one line follows the other as some poets (Paul Muldoon, Billy Collins for instance) advise. I think of a poem as a canvas where I work different spaces at different times. I am not following a narrative thrust all the way through.

I did a minor in 20th-century British Art for my master’s in painting and saw quite a bit of the London School of painters in London firsthand. On reflection, I realize Auerbach, Freud, Bacon were all emigrants. They specifically taught me that a work of art or a poem should have stature, have a reason to occupy space. On the other hand, the St. Ives group: Hilton, Lanyon, Hepworth, Davison touched me because of their individual creed, desire to follow their own eccentric but capacious vision. Presently, the British painter Cecily Brown has my attention because of how she disrupts the male gaze in the classic painting of the nude, and instead gives the viewer a sense of what it is like to be in a female body.

What do you feel about most of the postcolonial texts to which you have been exposed? Do you think a certain type of perspective pervades the genre, or is there a potential there for a highly personal idiom too?

I am grateful to such texts as ‘The Empire Writes Back’ and ‘Colour Me English’ as they have helped me locate my work in a genre. For those of us writing about islands, there has been the thrill of naming what has been unnamed for too long, putting the complexity of island life into serious verse for the first time.  However, noting the surge of Caribbean writing, the Jamaican-born poet Kei Miller, said if you have a mountain and a grandmother you have Jamaican Immigrant poetry which means that a type of island poetry is now thoroughly visible, and possibly redundant. I agree with him that there is enough of a new canon written about the islands so as to now merit highly individualized responses to them occurring, such as in the work of the brilliant poet Vahni Capildeo.

Can you elaborate on the notion of exile from the position of a poet? Robert Bolaño has said something quite revelatory about this. “Probably all of us, writers and readers alike, set out into exile, or at least into a certain kind of exile, when we leave childhood behind…The immigrant, the nomad, the traveler, the sleepwalker all exist, but not the exile, since every writer becomes an exile simply by venturing into literature, and every reader becomes an exile simply by opening a book.” What relevance do the words immigrant, empire and nationhood hold for you?

Yes, as Peter Stirr said, every poet writes from exile. For myself, it took me a long time to acknowledge I was an immigrant. The experience of moving from Bermuda to Farmington CT looked quite seamless on the outside. I moved from one affluent society into another. I did not have to learn a new language, many of my new friends vacationed in Bermuda at the private clubs I grew up in etc. But only after I realized the profound difference of growing up on a British Colonial semitropical isle almost seven hundred miles out at sea, versus the Northeast in America, did I know who I was and what I had to write about. My poems ‘I is for Immigrant’ and ‘We Didn’t Know Yet’ identify this awakening.

The word empire resonates for me particularly when I write certain poems about my childhood and an almost Edwardian formality and hence voice lingers around the poem. I was born in King Edward Hospital after all.

Nationhood brings to mind the event of 9/11 when fellow American citizens (I have dual citizenship) felt that their country was attacked. Although I mourned the hideous assault on American values with others, I did not feel my physical country was attacked. If someone shot a pea out of a peashooter at Bermuda, I would have felt my country was attacked. Hence, I think our birthplaces claim us on a very deep level and we feel the tragedies of such places profoundly. This is also true of celebrations. While I value the Fourth of July and American values, there is a sense I am an outsider, going through the motions of the Fourth of July, but not for The Queen’s Birthday. I think how you feel and live extreme events: tragedy, celebrations define your true geography, where you reside.

"Evidently, getting to like vegetarian meat is a matter of acquired taste and it’s a dish probably not for the...