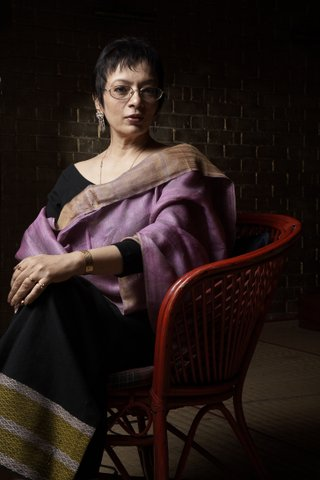 Our February Poet of the Month, Priya Sarukkai Chabria, recently published (in collaboration with Ravi Shankar) a series of translations from the songs of Andal, an 8th-century Tamil mystic, as ‘The Autobiography of a Goddess’ (Zubaan, New Delhi and University of Chicago Press, 2016). In conversation with The Missing Slate’s Pratyusha Prakash, Priya Sarukkai Chabria explores the process of translation and the appeal of moving between the present and the distant past, and suggests why Andal’s writing retains, after more than a millennium, “a palpitating nowness, [a] pulse of blood” which resonates with contemporary readers.

The poetry of Tamil Nadu is extremely sensual and rhythmic, with an interior music of its own. Its uniqueness isn’t always easy to convey, but it’s reflected in your translations of Andal. Do you find that the music — distinctively that of Tamil Nadu — seeps into your writing? Or does translating that music involve a conscious effort?

Thank you, Pratyusha. Yes, you’re right, cen or Old Tamil poetry is dense as an enchanted forest with sensual textures, assonance and alliteration, rhymes and rhythms.  However, Tamil is a di-glossed tongue. So in its spoken variant, it’s the voice of my grandmother narrating stories and counselling me, the aura of Carnatic music and dance, the sound of comfort, of my mother’s voice when her love overflowed. I now live in western India where Marathi is the first language. When I overhear a snatch of Tamil at the airport or cinema hall, my heart lurches. It’s as if I’ve been hit — which of course I have, hit by a part of myself. It’s the hit of homecoming.

But I’ve been touched and torched by Tamil Sangam era poetics which I’d read in translation decades before I began translating, and this has seeped into my own poems. Its vision is irresistible. Those ancient bards combined emotional inscapes and external geographies to sing of love, loss, violence; imagination was inclusive and expansive. They often used metonym to leapfrog over simile and metaphor. This abbreviation, as it were, of language, suggests the closeness between lovers — which includes the poet and her words.  Moreover, Sangam era poems could be read like riddles as each poem embedded three levels of significance. Like all riddles, they had the reader/listener in their thrall. This strategy playfully points to its postmodern resonance as well.

Here are a couple of my early poems (from ‘Dialogue and Other Poems’) that draw on Sangam poetics.

She says to her girlfriend:

He said to me: Keep faith.
So I kept a stubborn faith in him that grew
with every obstacle.
Swollen, taut, ready
I held this close within myself
feeling his absent presence
fill me full.

Suddenly —
this small spill,
for him a little thing.
His rapid pulling out of me
peels away my very skin.

She says to her lover:

I’ll tell you this in advance —
You who will be enclosed in my flesh, your rhythms
mine, our hands like a thousand comets descending
towards pleasure, your sweat becoming my skin,
listen: All this I want, and more.

Yet in your passion, do not scar me.
Do not split my lip, nor stifle speech.
Do not force my cervix out of shape
nor ram my individuality.

I am parched. Riven
by longing, caked by the long dust of denial.
Yet I’ll come to you as the first rain,
fragrant and trusting.

Translating classical Tamil poetry seemed a natural next step. However, I initially found this simultaneously familiar and unfamiliar, as in a dream of one’s ancestral home, intimate yet full of surprises. This was a trifle unsettling. But a different kind of perception and a different mode of reflection are sometimes made possible, as if one is reading musical Braille. Perhaps this was also because of the fact of translation: I was embodying another’s voice through my body.

So yes, this Tamil music, its bloodbeat and breath, has seeped into my work for a long time.

But then again, one doesn’t need to ‘belong’ to a culture to sing its music. Mono no aware, sabi and tabi, the sense of effervescence and broken beauty of medieval Japanese court poetry too thrum in my veins. When an aesthetic possesses you, you equally possess it.

Would it be correct to regard Andal’s poetry as subversive? She exalts and celebrates female sensuality and sexuality. She seems unapologetic in her approach. Would you consider her a feminist poet, or do you think that would be a form of retrospective appropriation (imposing our own ideologies on the past)?

I’m delighted you asked this question. But no, I don’t think it would be correct… From the beginning I’ve argued against pigeonholing Andal as transgressive or subversive. As you’ve have suggested, it becomes a form of retrospective appropriation: it’s merely easy, not true of her. The mystic inhabits an aura of her own.

From the beginning I’ve argued against pigeonholing Andal as transgressive or subversive.
Besides, from a historical perspective — which is a flux depending on the texts one reads — we can only surmise the norms she lived under. Consider this: Andal’s father, who is regarded as a saint, used the maternal voice to sing his devotion to the God Krishna. For the daughter, Andal, her body was the site of the sacred; she wishes to physically marry — have her body, mind and spirit enter and be entered by — Him. So while the father adopted the persona of the mother of God his daughter, Andal, threatened to mutilate herself if she wasn’t caressed by her divine Bridegroom. These transfigurations are part of the devotional bhakti tradition of Hinduism. As we know, in the Western tradition such love is termed bridal mysticism, whose foremost proponent was Saint Therese. But outside the paradigm of mystical passion it could sound unnatural, even insane.

To my mind, Andal was a wild, intense, loving mystic who tore the tapestry of societal norms of her time not as an act of rebellion but because she didn’t see them. They didn’t hold validity in her vision.

Also, there’s a danger of limiting her to the margins by labelling her as a subversive. She calls for cosmic harmonies to pervade her, she sings so we too align with this if we so choose, she sings because her hormones pulse in synchronicity with the heavens.

"In Asia alone, there live 4.4 billion of the world’s 7.3 billion people. But when top-notch recruitment firms in the...