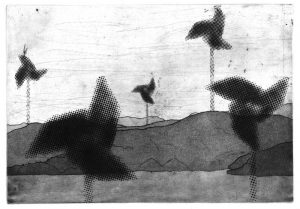 In the heat of a cruel afternoon the bedroom lies in sheltering darkness. The shutters of the white doors close out whatever sunlight succeeds in penetrating the Baroque curtains. The colours of the ceramic tiles are dimmed; the yellows, greens and blues are now but a kaleidoscope of silhouettes. The dark furniture happily sleeps in the new-found darkness. They seem to grow larger in the dense air that pervades the tiresome darkness of the siesta hour.

The bed is clean and well-made. The light white sheets rustle gently as a small green fan blows on them. Pillows of lily-white skin lie untouched, those helpers of sleep themselves seemingly asleep. On one of the pillows an elbow is placed. There is a huff and one half of the bed is covered. It’s the body of a woman. She sighs as she struggles to get onto the bed. She is careful not to mess up the homogeneity of the sheets. She’s not on the bed, she’s a part of it.

The darkness of the room envelops her and she embraces it in return. She fades away, sighs, and whines to herself about the heat, about the stairs, the whining one does almost like a prayer before falling asleep. She is tired beyond words. Life is exhausting. Not her own – but the one kicking inside of her. And now – kick! – it won’t even let her sleep. She runs her hand over her belly the way snow caresses a mountain peak. The woman is a glacier; there is so much more to that bump beneath the surface.

Please let me sleep, she said out loud as her grip unwillingly tightened on her belly. I’m tired, let me just have a few hours before daddy comes home from work. The baby kicked again, like a heartbeat with toes. What’s the matter, are you worried about something? What could you have to be worried about, my child? She sighed heavily, rolled her eyes to the ceiling and leaned her head against the padded headboard. She tried to close her eyes but they remained laconically, defiantly open.

I hate this time of day. It just drains you of energy, makes you feel ninety. The best thing to do is sleep through it. Besides, it gives you energy for the evening. There really is nothing better than a summer night in Malta.

She had never talked like this to her baby before. Up until now she had loved it via instinct, purely, sensually. But today, whether it was because of the heat or the fatigue, she felt the inexorable need to talk to her child. Some scientists say they can hear their mother’s voice! Then again some scientists say you should talk to your plants to encourage them to grow. Each to his own. She talked because she wanted to. Needed to. And the more she talked the less mundane the one-way conversation became.

I remember when I was a young girl my father used to have barbecues on the roof. The whole family would be there. And he took care of everyone. He made sausages, burgers, rabbit, chicken, potatoes – everything. He would prepare punch as well for all the grown-ups, and I could see their faces recoil and wrinkle up when they had a sip, “that’s strong stuff Alfie” – their faces looked annoyed as if they were being bitten by mosquitos, you know? She laughed in a hiccup.

On that one roof there was my whole world. All my aunts and cousins, some my age some as old as my uncles, my grandmother, her mother, some neighbours – there was a television up there too, black-and-white back then, blaring out the eight o’clock news which demanded everyone’s attention like a political magnet. I would run around the roof with my mother’s brother until he was told off for running near the ledge by his wife. Then I’d sit down on a plastic chair and eat some sausages – those were the best!

Daddy’s so angry, you wouldn’t believe. And he’s right: we should move to London. He’s got a good job offer there. You’ll like London, it’s so so big you can’t imagine.

When you’re born you’ll know what I’m talking about. Your grandad isn’t as fit as he used to be, he needs help, you know, from your dad and me and his sister; but he still does a great barbecue. This time next summer, yes, we’ll do it – I promise.

The baby kicked again as if picking up on some emotion in its mother’s voice. It wasn’t excitement. The kick was cruel, as if it was calling her out on a lie. A lie. She squirmed as if she had sipped her father’s punch. She held her belly tight. What’s wrong? Her fatigue was fading away into the likewise pregnant heat. I’m sorry. I’m not lying. I promise we’ll have a barbecue here. Even if we’re not living here.

She sat up on the edge of the bed now, her arms outstretched on her side, her neck stiff, and she looked around her room. On the chest of drawers there was a veritable family album in frames. Her young father looked back at her from his wedding day. She and her mother dangled on the edge of a cliff. And there was her mother side by side with Mintoff. She thought of Mintoff then and almost hated him. It’s his fault Joey’s making them emigrate. It’s his tightness, his austerity, that’s frustrating daddy.

Daddy’s so angry, you wouldn’t believe. And he’s right: we should move to London. He’s got a good job offer there. You’ll like London, it’s so so big you can’t imagine. Even I can’t! No, no I’ve never been there. But my sister’s been. She says she didn’t like it. It’s too cold and it gets dark early and you can’t walk around anywhere and there’s nowhere to swim, you can’t stay outside because of the weather and the only places to go are pubs that are dark and stuffy…

As she spoke she didn’t realise she was crying. A tear fell hard on her belly and the baby kicked back.

She looked around her, at the darkness of the room, and imagined that cruel afternoon lasting all day and night. That’s what London was like. There’s nowhere better than here, she said smiling, drying her eyes, it’s the best country in the world. And I can say that even though I’ve never stepped foot outside Malta. She remembered Mintoff speaking at his mass meetings, shouting, with the most powerful voices on earth: Malta l-ewwel u qabel kollox.

“Malta first and foremost, that’s our message, sir, we have to make sacrifices for the good of the country.”

“For the country, or for Mintoff’s thugs?” The door slammed in her face and she was left feeling downhearted on a drab afternoon a few winters ago.

This was when she was a canvasser for Mintoff. The Saviour, as his supporters used to call him. Malta’s architect, her prime minister, leader of the Labour Party, dear Dom, Dom Mintoff, the man who freed us from the yoke of foreign rule, our own Castro – our own untouchable.

Ever since Freedom Day in 1979 popular opinion began to turn against him, she told her apolitical unborn. She wasn’t a political woman by nature but she lived in political times in a political country – so she had to be. She had enrolled to canvass for Mintoff because her mother insisted. She had canvassed for him back in the 60’s and it was a sort of family tradition – one you will never be able to continue, my child. Mintoff will be long gone from the political scene by the time you’re grown.

I remember the only time I met him and spoke to him. He was magnetic. He dropped in on a meeting for canvassers being given by the communications people of the party. Mintoff walked into the room and everyone held their breath. He is a short, compact man with a large forehead, but you know how it is, the denser something is, the more powerful! He came to shake all our hands with that cheek-to-cheek smile, making jokes with all of us, wearing his dockyard belt with the large buckle, casual in a chequered shirt and jeans – he looked just like my father.

"The Bryn Mawr Classical Review reminds me that the race to the bottom in which 99.999% of online publications are...