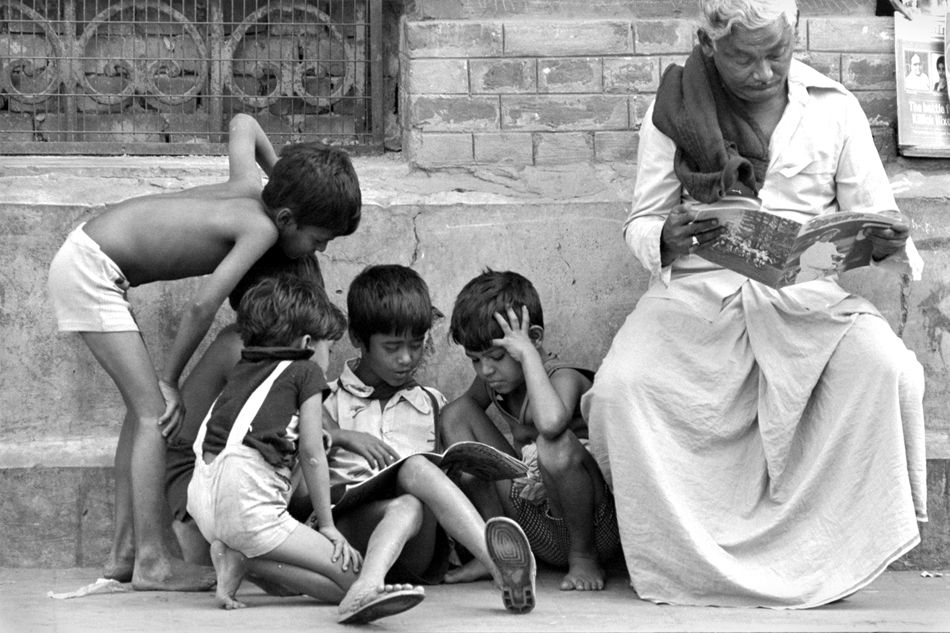 Photography by Mark Wyatt. Image courtesy of the artist

“Away from the sound of bombs and bullets, in the basement of a crumbling house in the besieged Syrian town of Darayya, is a secret library. It’s home to thousands of books rescued from bombed-out buildings by local volunteers, who daily brave snipers and shells to fill its shelves. In a town gripped by hunger and death after three years without food aid…this literary sanctuary is proving a lifeline to a community shattered by war.”

Just like the body needs food, the soul needs books.

Upstairs, the world explodes.
The planes, once chased by children,
drop their bombs. Buildings crumble,
crops catch fire, the enemy closes in;
people put up shelves, and search for books.

Downstairs, heaven
in hell’s basement. We don’t ban any books.
No time for limits. A doctor reads Hamlet
as he operates, desperate to make it
to the final act. The attacks begin again;
he never reads, ‘Go bid the soldiers shoot.’

Soldiers read on the frontline.
In one hand a gun, in the other, a book,
which they swap for the next man’s.
An instinct for order in disorder.
At the library, there is a book club.
They discuss the end of the world.

The circle is tightening.
They know this cannot last.
But a teenage librarian prepares his troops
for one last defiance:
no-one will make the mistake of telling.
One day, hold no more guns, hold only books.
Read stories unlikely as this one.

You can read everything in books.

A teacher asks her class to picture heaven,
but they have only one picture,
that single thing the sky can mean: the plane,
with its bomb, and its target,
the one they always dream of, always expect.
Nothing behind this vision, nothing else
worth imagining. Only that one horror
no rivers of honey can sweeten.

Tabitha Hayward is a third year English student at Oxford University. She has been published in The Isis, The Oxford Magazine and Ash Poetry Magazine and won the Graham Midgley Poetry Prize in 2015. She also directed her theatrical adaptation of Tennyson’s ‘Maud’ at the Burton Taylor Studio in Oxford this year.

Poet’s note: The stories behind this poem come from Mike Thompson’s recent radio programme ‘Syria’s Secret Library’ on ‘Crossing Continents’ on BBC Radio 4, as do the quotations from citizens of Darayya, which are italicised in the poem.

"There were no apologies, no good-byes, only a calm, rock-hard assurance that she was doing the right thing." Story of...