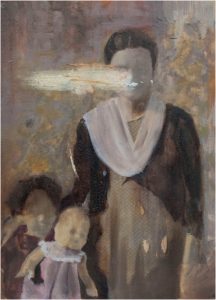 That little girl’s glare would spook the pope.

With grocery bags hanging from each hand, Maureen walked stiffly toward the child stationed on the walkway that ran alongside the tenement. She tried sounding chipper: “Hello, Sophie, how are you today?”

Personable as an ice cube, the kid stared back, eyelids droopy with boredom or contempt. She usually didn’t respond, and Maureen stepped onto the grass to get by.

Suddenly: “Did you get any real maple syrup?” She was eight, but her face had already lost its baby fat. Raven hair and eyes like blue flame, she could be a black Irish beauty, if she’d smile.

“No.” Maureen shook her head slowly. “Do you like maple syrup?”

“It’s the blood from trees,” Sophie droned, and turned to walk to the backyard.

After interactions like this, Maureen would tell herself to never second-guess her intuition. She’d known the girl was off that first day—last year, when the parents had toured the upstairs apartment in the house she and Sal owned. Maureen was showing Tricia and Edgar all the things that had made her fall in love with the place—the beadboard paneling, the claw foot bathtub, the crown molding—and had figured their daughter was just off exploring on her own. But when she opened the door to the walk-in pantry, there the kid was, standing in the dark, facing empty shelves. She spun around quickly, scowling. “What?” she hissed, squinting at the light. No more, just What?

All the windows were open, and the smells of the new spring wafted into the kitchen, providing a welcome distraction from the ear-wax rattling rehearsing of Ann and Paula, the twins, who were on the program to sing ‘Do You Believe in You?’ an original song the chorus teacher had written for the sixth grade graduation. Maureen was up on the counter with a Q-tipping dust out of the latches, and Leo was working at his little art table in the corner. He was so different from the twins, who’d had been absorbed in each other from the start, touching, babbling, laughing in ways that placed everyone—even their mother—outside their little twindom. Even at five, Leo preferred solitary projects, was always turning something into something else. He drew pictures—mostly birds and flowers—with remarkable detail, and he brought the twins’ abandoned Barbies back to life as astronauts in tinfoil spacesuits. But the way he moved his shoulders when he watched his sisters sing made Maureen bet he’d only ever think of girls as shopping buddies. She didn’t bother mentioning anything to Sal, who needed clues on a billboard.

She was grateful for the temporary quiet of the girls’ bathroom break, but the peace was suddenly interrupted by a sound from outside, starting as an almost-whistle and building to a sustained yowl. Both she and Leo stopped what they were doing. It was like a baby crying. “Leo, stay there,” she said, hopping down from the counter.

In the backyard, the sound was bouncing and ricocheting off the fence, the house, the trees, everything around her. She searched everywhere, behind the bulkhead and under the tarp draped over the lawnmower. She finally found the source, behind Sal’s storage shed. One of the neighborhood cats was in the corner, clawing at its neck, screaming like it was afraid and angry; and its head was bobbing up and down, like it was trying to shake something out of its ears. Maureen took a step closer, but the cat’s crying became hissing, and one paw lifted to strike. It gathered its senses long enough to bolt past her and along the fence into the side yard, where it twirled a couple of times before it started scraping its head against a rail.

She sprinted back to the house and called Animal Control. “There’s a crazy cat in my yard,” she said, peering out the window. “It’s jumping up and down in a weird way and sounds like a baby choking.” The woman on the line said it was probably rabies and not to go near it.

“What’s the cat doing?” Leo screeched, running to a window and sliding the curtain behind his head to see.

In an instant, Ann and Paula were at the other windows, their foreheads pressed against the screens. The girls were near tears. “Oh, the poor little thing!” “Why’s it doing that?”

By the time the two men arrived, the cat lay whimpering against the hurricane fence. It tried to get away as they closed in but could only take a few steps before tumbling over in exhaustion. Kneeling over the cat, the men seemed to be deliberating, and Maureen knew they’d never get that close if it were rabid. And they weren’t rushing to put it in the crate they’d brought, either. She wanted to know what was wrong with it. “You three stay here,” she said, but as she opened the door, the twins and Leo sprang like grasshoppers to follow. “Well, at least keep your distance,” she warned, as she grabbed Leo’s hand.

They stood in a circle around the action. The older man, wearing what looked like oven mitts, cradled the cat in his arms, while the other guy was hunched over it with scissors. Maureen pulled Leo toward her, ready to cover his eyes at the first sign of bleeding. The cat cried, and the twins grimaced like little speak-no-evil monkeys, their hands covering their mouths. “Is it going to be okay?” asked Ann.

“Somebody wrapped an elastic around its neck,” said the older man. “This your cat?”

“She belongs to the Donovans,” Maureen answered. “Two doors down.” An elastic around its neck? Cats were untrustworthy, but to do this to an animal.

“Donovan. We’ll call to tell them. This cat’s gotta see the vet,” he said.

Maureen turned to an arriving blur, and there was Sophie, between the men.

“It’s all tangled in its fur,” said the younger guy, changing the scissors for another pair that was shaped like a parrot’s beak. “Even if I snip it, not sure it will pop off.” His rubber gloves were the color of a robin’s egg.

Leo was rocking back and forth, and the twins looked like they were waiting for shots. Sophie was dead-faced, as always. “How long before it woulda died?” she said, like asking for the time.

Both men looked at her for a moment, and then at each other.

Her question ignored, Sophie silently watched the younger man cut away at the elastic embedded in the hair. There were a few small red flecks on the blue gloves. The cat was either resigned or semi-conscious, panting, unblinkingly staring at the sky. Each time the animal made a sound, her children winced and Sophie smiled. Even smirked once.

“The nice men are taking good care of the cat,” Maureen said weakly. Sophie had done this. Definitely. Her eyes were transfixed by the cat’s little bib of blood.

Bud JenningsfictionStory of the Week

“I teach a class to the newly enrolled ghosts…/I make them practice so they won’t be shocked even if they leave no footprints on the
snowfield/ I make them practice falling asleep floating in air/ I teach them such things as how to overcome melancholy inside a coffin…”
By Kim Hyesoon, translated from Korean by Don Mee Choi.

"It isn’t all beer. Not quite..." Next stop on Robert Cottrell's tour of the web: Deserter.