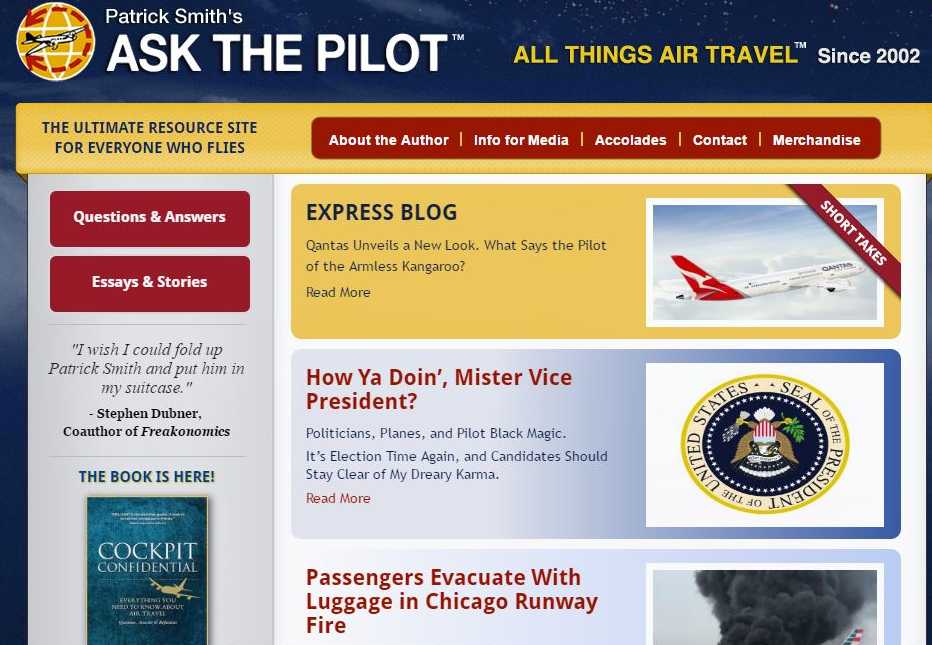 And happily the trade-off is rarely as stark as that, because professionals who are good at their work also seem to be good at writing about their work. This may be due to a combination of self-selection among bloggers and natural selection in the blogosphere — but it may also be evidence that writing well really isn’t difficult when you are writing about something that you know and understand. Special skills are needed mainly for writing about things that you don’t understand — i.e. journalism.

You will find the answers to all those questions you have always wanted to know about the inner workings of airlines, but no longer dare ask for fear of ending up on a no-fly list
It pains me to think that if it were not for the Internet, the most we might hear from Patrick Smith would be the occasional gnomic remark over an aircraft PA system about headwinds and cruising speeds. Instead, through his blog, Ask the Pilot, he has been explaining aeroplanes to passengers since 2002. He is everything you would want your pilot to be: well-informed, sceptical, calm, lucid, authoritative. Which turns out to be a pretty good skill-set for a blogger too.

For a flavour of Smith’s longer writing, try his discussion of ‘Sully’, Clint Eastwood’s film about the Airbus which landed on the Hudson. Or his philippic against airport security lines. But as the blog-title suggests, Smith’s true vocation is that of oracle. Somewhere in his archives you will find the answers to all those questions you have always wanted to know about the inner workings of airlines, but no longer dare ask for fear of ending up on a no-fly list.

For example: Is the cabin air safe? (Yes. The pilots breathe the same air.) Can turbulence flip a plane over? (No.) And, the greatest mystery in flying since the disappearance of Amelia Earhart, what is meant by “disarm the doors and crosscheck”?

“The intent is to verify disarming of the emergency escape slides attached to the doors. When armed, a slide will automatically deploy the instant its door is opened. Disarmed, it needs to be deployed manually. On departure the slides are armed to facilitate an emergency evacuation. (You might hear this as “doors to automatic.”) Upon docking, they’re disarmed to keep them from billowing into the boarding tunnel or onto the apron during servicing.

Crosscheck is a generic term used by pilots and flight attendants meaning that one person has verified the task of another. In the cabin, flight attendants crosscheck one another’s stations to make sure the doors are armed or disarmed as necessary.”

You may now disembark.

“I realize I’ve been … a kind of psychedelic Philistine. Perhaps it was my slightly romanticized, somewhat pantheistic, sense of all this…” Part two of Michael C. Blumenthal’s essay on the psychedelic experience in mid-age.

The Missing Slate's six nominations for the 2017 Pushcart Prizes.