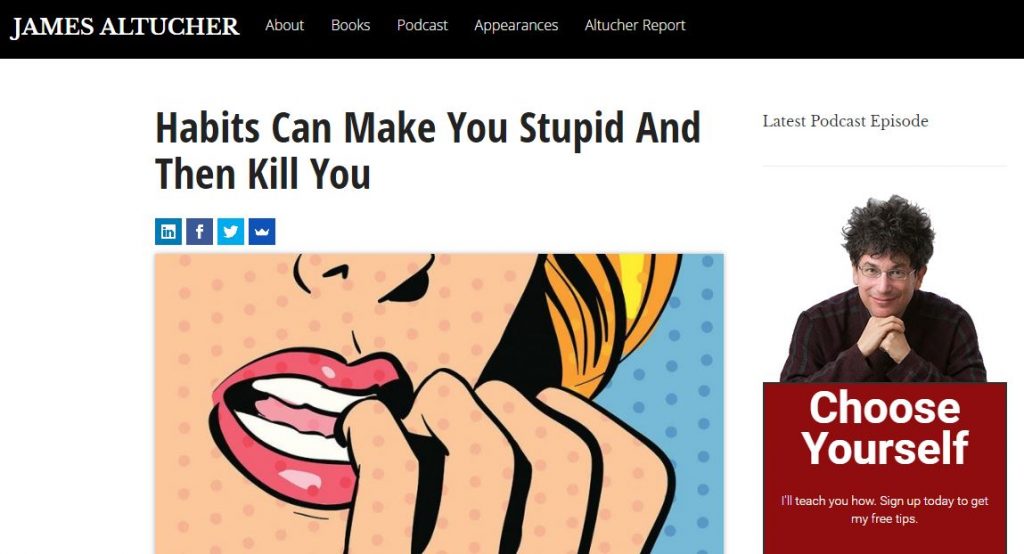 Both have their place. But oversharing rarely succeeds because private things are private for reason. People generally don’t want to know that much about you. Oversharing is a performance art that only succeeds where the oversharer has the right style, the right charisma. You must feel for them, envy them. You want more of their inner life, even the messiest bits of it.

James Altucher is the Mozart of oversharing, and he has the leitmotif right there in his mission statement on Medium:

“For some reason, I’ve turned myself inside out and all my guts have spilled onto my blog. One day I’ll run out of stuff but not yet.”

I’ve been following James’s writing for at least a decade, since he had an occasional column in the Financial Times. Now he writes mainly on his own blog, Altucher Confidential, and republishes to Medium.

I don’t know to what extent the blogging James is a persona — but if it is, he does a better impersonation of honesty than any other blogger I know. I can’t help but feel on first-name terms with him, like — I am sure — his other ten million readers.

James Altucher is the Mozart of oversharing
You learn fairly quickly that James used to design websites, made millions in the dotcom boom, lost them in the dotcom crash, broke up with his wife and had several nervous breakdowns. Now makes his living by writing and by investing in tech startups. In his own words:

“I’ve never come up with an original idea in my life. My first successful business was making web software, strategies, and websites for Fortune 500 companies. Not an original idea, but at the time, in the ’90s, people were paying exorbitant multiples for such businesses. My successful investments all involved situations in which I made sure the CEOs and other investors were smarter than me. I thought I was smart. I wasn’t. I’m mediocre.”

Failure is his muse. Here is his philosophy of failing well, in a nutshell:

“Ultimately, life is a sentence of failures, punctuated only by the briefest of successes. So the mediocre entrepreneur learns two things from failure: First, he learns directly how to overcome that particular failure. He’s highly motivated not to repeat the same mistakes. Second, he learns how to deal with the psychology of failure. Mediocre entrepreneurs fail a lot. So they get this incredible skill of getting really good at dealing with failure. This translates to monetary success.”

On personal matters, James’s level of candour can verge on the chilling. As in these reflections on fatherhood:

“When the first kid was born I was very unhappy. I left kid and mom at the hospital and went through two sets of locked doors with video cameras to play poker at a private club in Manhattan … Just a day earlier I had been hoping the baby would be born dead even while my ex-wife was in labor. Just to selfishly save me from 20 years of what I thought would be horror.”

Although, fast-forwarding a few years, it works out OK, for the children if not the marriage:

“No matter what terrible things happen in a marriage (and terrible things always happen), they didn’t happen to your kids. Some things I deeply miss because we are not together as much. I miss the ‘Daddy!’ and the hugs when I come home from work.

And now they are teenagers and that part of their life is over. Now I’ve been given the assignment to help make them into good adults so they can continue to destroy the world like I’ve been doing. I only hope I am doing a good job.”

Unless you happen to have an alarmingly interesting inner life and a pretty eventful outer life too, I do not recommend James Altucher’s radical honesty as a model to follow. But I am glad that James is there to shock me out of my complacency every now and again.

"Spare me this Arab love for dictators tonight./ Come closer, listen—Warda is singing..." Poem of the Week (November 23), by...