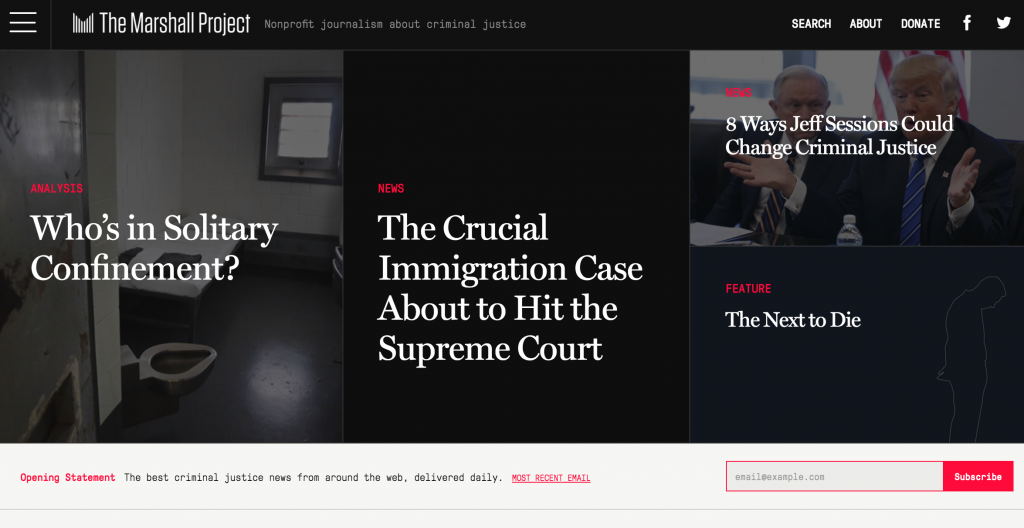 The executive editor of the New York Times has arguably the top-ranking job in the whole of American journalism. It’s a hard thing to top. There are no more worlds left to conquer.

So when Bill Keller stepped down after eight years as editor of the Times in 2011, you might have expected him to blur gracefully into the ranks of the great and the good — lecturing at Harvard, writing big books about American history, sitting on the boards of a few foundations.

Instead, Keller doubled down on journalism. In 2014 he took a new job as editor-in-chief of The Marshall Project, a non-profit journalism start-up named after Thurgood Marshall, the first African-American justice of the U.S. Supreme Court.

If you want to see journalism at its best, then this is the place to go
The aim of the Marshall Project is to “create and sustain a sense of national urgency about the U.S. criminal justice system”. And with Keller in charge, the website has been delivering handsomely on that mandate. What looked at first like an eccentric move on Keller’s part now looks like an inspired choice.

The Marshall Project’s long features are, without exception, jaw-droppers. ‘This Is Rikers’, a portrait of the notorious jail on Rikers Island in New York is one of the most terrifying things you will ever read:

“The crowded isolation of the island has resulted in a complex society with its own hierarchies, official and not. Gangs openly control certain dorms; correction officers are in constant battle — often literal — with their charges, but some of them form transactional relationships with them too, whether for sex or drugs or cigarettes. People are born on Rikers — there are 15 beds for babies adjacent to the women’s dorm — and they die there, too.”

‘An Unbelievable Story Of Rape’, produced jointly with ProPublica, rightly won a Pulitzer Prize this year. The narrative tension is maintained so skilfully throughout the piece that no summary or excerpt could do it justice. It has to be read to the end.

To vary the pace, the Marshall Project regularly gives a voice to prisoners and to those who work with them; the results include some of the site’s most memorable articles.

‘What It’s Like to Almost Get Executed’, Kevin Cooper’s account of what might have been the final minute of his life, is both gripping and haunting. Who knew you had to be strip-searched before you could be executed?

“After what seemed like eternity, the strip-search was over. I was given new clothes. I once again looked at that clock, and it was a few minutes after 7 p.m. I was placed inside a cage to wait until my execution.”

Less dramatic, but equally moving in its way, is the diary of a prison barber:

“As soon as they sit down, the first thing I do is take out my mirror and give it to them. For most of the inmates, it’s the first time they’ve seen their reflection in a month — and they’re always shocked.”

Story of the Week (May 10), by Saeed A Naqvi Syed. Translated from the Urdu by the author.

"The line/ reincarnating as a fragile ceasefire margin,/ that moves to and fro with glacier tilt" Poem of the Week...