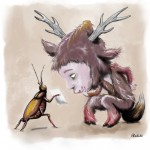 “Louisa and the Blatte” by Ankolie

of Warhol’s demimonde, but nearly as strange

and each as various:

the barista at The Iroquois throwing her mane

who is also an actress (not surprisingly),

but can’t wait to see Tron

or some other gadget laden film

on the small screen of her I-Pad.

Thanks too to the French couple

eating their pommes frites with mayonnaise

and the shared burger with a knife and fork

at the Two Guys not far from the Met

on Madison, not to mention the out-of-towner

at the Red Flame who wanted matzo ball soup

explained in Spanish. And the Russian waiter

doing his best and the Filipino-born Australians

they had ever seen. Get used to it—

this is the America of difference

and same, people laughing and crying at once

when Shylock tells Portia his name.

Michael Salcman is a physician and teacher of art history. He was chairman of neurosurgery at the University of Maryland and president of the Contemporary Museum in Baltimore.

He is the author of two collections: The Clock Made of Confetti (Orchises), nominated for The Poet’s Prize, and The Enemy of Good Is Better (Orchises, 2011), and his anthology of classic and contemporary poems on doctors and diseases is forthcoming.