Chinelo Okparanta is without a doubt a gifted short story teller. Her plot unwinds, her characters breathe life and her settings hold history. Even so, I would have preferred the story to have another title: America gives away too much and slants the reader’s ideas towards a certain bias. The first paragraph describing the bus journey to Lagos could have actually been written by an American visiting Nigeria for the first time:

“We drive through the bushes. We pass the villages that rim our side of the Bonny River…That the trees grew tall and from them sprang green leaves…”

There is nothing particularly distinctive, except that the place was narrated to the protagonist by her mother when she was young. The description is too general. However, the reader’s interest is piqued when we see the children playing in oil-choked rivers, evoking a mental picture of the oil spill. It is a clever way of introducing the importance of resource management. Later in the story, we are given comparisons between the way Americans and Nigerians deal with oil spillage. The children are innocent victims of an uncaring or incapacitated Government. 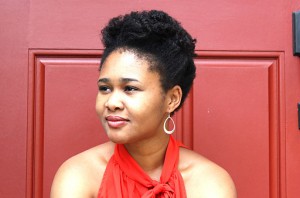 The journey from Port Harcourt to Lagos for a visa to America highlights the desperation of an individual, the hardship of one country, and a spirit of perseverance. There are several reasons why the protagonist takes this trip. Apart from the desire to be with her female lover who lives there, she also seeks better economic opportunities through a better career. As a teacher she is in a noble and privileged position where she learns a lot and passes on knowledge to others. It is through this job that Nneka meets Gloria, a consultant who later becomes her close friend and, in effect, her lover. Gloria settles in America and transforms into an even more analytical economist, sharing ideas and knowledge in public and private media. Nneka desires to be a part of this new existence, as well as simply wishing to join her lover.

It is the mother who brings a deeper sense of relationship, of life and of culture, without being too radical. On first hearing about the affair, she shakes her head and says that the wind has blown and the bottom of the fowl has been exposed. This may appear too animated, but it does bring us closer to the mother. We understand she is losing her only daughter to a relationship she has not yet quite fathomed herself. It is interesting that the father is more accepting, but the mother brings a closer reality. The mother is also concerned that if her daughter goes to America, she will get lost and never want to return, which is not an improbability in Nneka’s case.

Her plot unwinds, her characters breathe life and her settings hold history…
These flashbacks and thoughts of Gloria make the bus ride to Lagos more bearable, even when the bus breaks down. America represents everything fancy in this story, it represents hope, salvation and intelligence. Nneka tells the immigration officer that she seeks to study a Masters in America to learn better ways of addressing the oil spillage: it is a little too forced but the message cuts across. America is not only the land for knowledge but also the place that will accept her and her lesbian relationship. In Nigeria, it is a criminal offence to be in a homosexual relationship and besides, she will also not be able to give her mother the grandchild she so desires.

There is a lot going on in the story but the dialogue and incidents make for an interesting read. I wish Chinelo the best as she continues on her writing journey.

“…Why one relative wouldn’t look in another one’s eyes, these never qualified as bedtime tales, or as I grew older, any-time tales.” Soniah Kamal talks of growing up in modern Pakistan and 9/11.

Baudelaire and Cinema, Part I: Colour

Film Critic Marcus Nicholls suggests that we take a look at film, and Gus van Sant's Last Days in particular,...