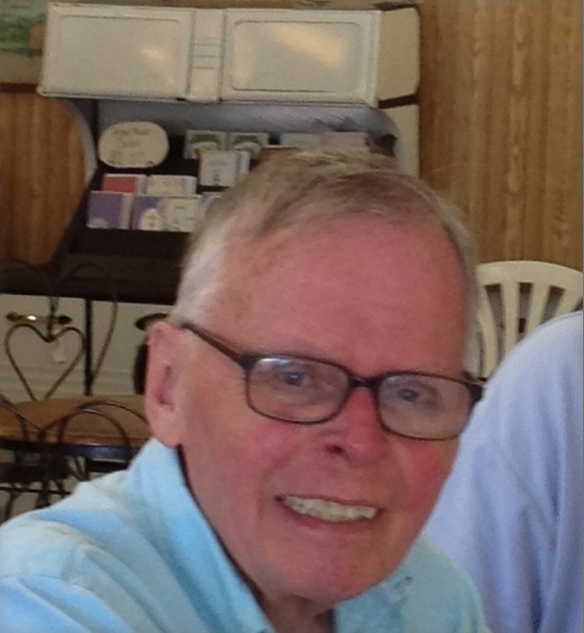 In the second interview of our Poet of the Month series, Doug Bolling talks to Senior Poetry Editor Camille Ralphs about Plato, Dadaism, and Magritte’s attack on the relevance of titles.

Click here to read “Magritte’s The Human Condition”, our Poem of the Month.

It strikes me that the first quotation you give, of symbols as “substitutes” for “the mind incapable of knowing the things themselves”, sounds a similar idea to that of Plato’s allegory of the cave.  Would you agree?

I believe there is a great difference here between Plato and Magritte. Plato’s metaphysics of immutable essence, the eternal, the universal over the temporal meant that he distrusted the imperfect world of the finite as removed from the true, the Real. Art became a copy of the copy of an unstable physical world and therefore suspect. We humans live in a shiftless world of shadows and our art only magnifies the mess. The cave allegory may be a good one but it doesn’t clarify Magritte’s direction.

Magritte wants to explore the object, not denigrate it. Wants to propel the viewer out of his cultural accruals/blindness to see anew, see the mysterious being of the object in se. His blast at the symbol might well be an echo of Tristan Tzara’s 1918 DADA manifesto in which he dismisses symbol as a wall getting between the artist and the real.

You’ve also quoted Wallace Stevens’ ‘Study Of Two Pears’ as an example of the impenetrability of objects. The Stevens poem ‘Thirteen Ways of Looking at a Blackbird’ seems to take another view, however. Do you think it’s possible to project ideas onto objects or existences, and in doing so to change their nature, in a sense?

Stevens’ poetry seems often focused on issues of epistemology. What we can know, what not. (A post-Kantian perhaps) He explores the relationship between knower and known, seer and seen. For example, in ‘Two Pears’ he tells us the ‘will’ doesn’t see the pear qua pear but only what the will decides about it — false knowing. This seems very close to Magritte. We constantly project our learned vision onto objects and so falsify them. We don’t change them but we see them through a mirror. The snow man‘s wise passiveness is the contrast. ‘Blackbird’ is a far more subtle and interesting attempt at these issues, one of Stevens’ finest.

Much poetry today has become too much a matter of wordplay, a clever flaunting of tropes…
Further to this, is language a reappropriation of reality? Or is it an attempt to become closer to reality? Magritte once said that ‘the aim of poetry would become acquiring familiarity with the secrets of the universe allowing us to act upon the elements’ — is poetry an attempt to know reality, to shape it, or both?

Much of the above applies here. All the great work in language study, anthropology, etc. suggests we use language to reappropriate reality as you say and also use it to try and know the world. Poetry, I believe, wants to use the riches of tropes and other assists to reach some truth about the script we find ourselves enacting day to day. And of course it seeks to shape the raw input into texture of words, etc. A vision we might not otherwise have. That to me is its great power, its mana. Though, I believe much poetry today has become too much a matter of wordplay, a clever flaunting of tropes and world be damned.

Magritte also claimed that the majority of his titles were chosen arbitrarily, and often came up with names for his works by asking or borrowing from friends. The title ‘The Human Condition’, however, could apply to many of Magritte’s works. What do you think his work, and particularly his work as you’ve portrayed it in your poem, says about the human condition?

Fortunately we have Magritte’s written statements and comments he made to close friends on what he wanted titles to be/do. Traditionally, the title was seen as a guide to the painting’s subject matter. The painting as a verification of what the title dictates. Magritte’s view attacks that very clearly. He is always on the side of disorienting the viewer and thereby forcing him or her to see anew, to have the chance to witness to the sheer being-ness of the object itself clear of all the layers of expectation as to what an object is. The title is irrelevant then but important in its contribution to a valid kind of seeing. So, “The Human Condition” as a title can be used for many paintings. It doesn’t tell the truth of what awaits in the canvas itself. It’s a decoy so to speak. If a meaning for it is wanted, perhaps it is that we humans find ourselves staring at a world of mystery beyond what we have been conditioned to see.

“You, who always show up in the winter, year after year;/ you, who get lost/ and walk in the streets, and without meaning to, teach/ me to live and help me to die…” By Jaime Saenz, translated from Spanish by Kit Schluter.

"Two stones crisscross in midair and slip into the water. There’s hardly any splashing. He goes under again." Story of...