by Asmara A. Malik 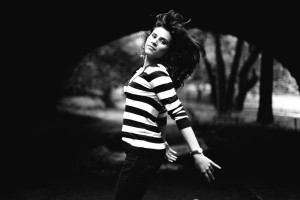 To call Zoe Viccaji a rising star would be a gross understatement. As a crucial part of the seminal Coke Studio phenomenon for the past six years, and with a vast repertoire of increasingly visible solo and theatre performances under her belt already, you would have to be living under a rock to not see that her star has truly and firmly arrived.

The proud Karachiite, born to a Christian mother and Parsi father, cannot recall a time when music wasn’t part of her life. The Viccaji family is as artistically inclined as they come (all three siblings have been a vibrant part of the Karachi art and music scene) and it was perhaps that nurturing environment that led her to fully pursue her first love– music. When the question is put to her, her response is emphatic:

“From the moment I heard the first song that I liked, I had to learn to sing it and perform it. As kids, we would pretend to be performing and put on concerts to an audience of plants in the garden. Now, singing on stage or finishing a song brings me so much joy, it’s something I want to keep doing over and over again.”

“I think if I had stayed in New York [after college], my career would’ve gone more along the musical theatre route.”
With a career spanning over a decade, the range and depth of Viccaji’s work is astounding. Starting her career as a teenage musician with ‘Ganda Bandas’ and evolving as a singer and actor with growing mastery over multiple languages, she’s clearly not one to spend much time looking back. She credits her time in Karachi as instrumental in determining the direction of her musical journey.

“I think if I had stayed in New York [after college], my career would’ve gone more along the musical theatre route. I would have aimed for Broadway, for sure. I would also probably still be writing music and performing my own music, but staying more in the indie loop. I would have stuck to singing in English, for sure.

“My growth in Karachi just took me into a very different zone. Here, I had access to Eastern classical music and Coke Studio, which inevitably took me on a journey of exploring the eastern side of music. Also, singing in Urdu made so much more sense since I was living in Pakistan, and singing for an audience here. And even though it was super daunting at first, I enjoy it now.

“Overall, I feel very fortunate at the turn of events. I’ve always wanted to be close to my family and being out of Pakistan after college just wasn’t a very happy option. I therefore feel very grateful that I have been able to live in Karachi and continue pursuing what I love most.”

With a BA in Art and Sociology from Hamilton College, New York, Viccaji is the embodiment of an artist successfully pursuing her passion as a profession. This is unique in a country like Pakistan, with its prevalent middle-class mantra of ‘get-a-real-degree-even-if-you-want-to-get-into-arts’, spawning a schizophrenic mix of doctors who sing, accountants who are poets and engineers who are actors. I ask her if she thinks this trend is conducive or more damaging to the younger generation.

“I guess I need to think about that one in the context of what I would tell my children to do. At the end of the day its different strokes for different folks, but I would say it would be wise to have a back-up plan especially in a field where is difficult to sustain oneself. Having said that, I also think that once you get your degree, it’s important to throw yourself headfirst into whatever you love to do and do it with all your heart – and money should not be a guiding force. I can only speak of my personal experience where I flitted around for a few years before finally settling on music. My mother always told us to do what we love doing, and the money will follow.”

In a music scene dominated by powerhouse vocalists like Meesha Shafi and Quratulain Baloch, Zoe’s laid-back, black-coffee, smoky-jazz-infused voice results in the sonic equivalent of a double-take for the average listener. Without the typical eastern fanfare of ‘alaaps‘ and ‘raags’, her songs are at once elegantly modern, yet deeply rooted in an unmistakably Pakistani style. With her razor-clean sound and vocal precision, I am not surprised to learn that Ella Fitzgerald is her oft-cited inspiration. “It’s her voice that I loved. The warmth and grain in her tone was very comforting, and I enjoyed the ease with which she sang.”

Among contemporary singer-songwriters, she professes to a fascination with the late Amy Winehouse. “Her music seems like a true extension of herself. I liked her style and the very nonchalant attitude she had when performing.”

Another facet of Viccaji’s musical persona that sets her apart from many female singers is her ease with collaborative efforts. Be it with major players like Strings, or on a more intimate scale like in “Zoe & Zohaib,” she is not afraid of trying out new musical styles with performers from different genres.

I first heard her solo voice on ‘Bolo’, a song that came about from her collaboration with Zohaib Kazi, the production guru behind ‘Ismail ka Urdu Shehr’ and Coke Studio veteran. “Zohaib had first asked me to lend vocals to one of the songs on his album,” she elaborates, “and that’s when we realized we really enjoyed working together. As a solo musician or producer, one craves another brain to work with, and another person to depend on. I think Zohaib and I saw each other as a good partnership, and I’ve learnt a lot about myself from working as part of a duo.”

As evocative as it is moving, ‘Bolo’ is an emotional song, empowered by its honesty and playfulness, with a rousing chorus sung by Pakistani schoolchildren. I ask her if being part of a minority in a predominantly Muslim nation had any impact on her rendering of the song: “I don’t know if the religious angle had anything to do with my sentiments towards that song. But being a part of ‘Bolo’ felt exhilarating, I felt I was part of a bigger effort to inspire people to get out of their comfort zones, and be vocal.”

Going a step further, I ask her if she ever felt that she was discriminated against or somehow ostracised while growing up in Pakistan: “No, I’ve never felt that way. Not to say discrimination does not exist, I personally know many people from minorities who have been deeply affected.”

As a fan, I’m curious about the future of one my favourite duos but Viccaji’s growing fame and the sheer amount of projects she has lined up may mean limited releases from the project. “Zohaib and I are constantly on varying tangents with regard to music- if our paths meet again then perhaps there could be a mini-album.”

With the conclusion of the current season of Coke Studio, I ask her about the impact the multilingual, genre-bending show had on her shaping her musical sensibility from the early part of her career till now.

“It’s like going to an excellent university and having this amazing library that you have open access to. That’s how I felt about Coke Studio. It was not the be all and end all of my music career, but it was a huge part of helping me shape it. It put me in touch with our musical roots- a whole range of beautiful compositions, a great team, many gifted musicians, all sorts of inspirational singers- and it felt even greater that I could be a part of the final music that came out of it all. I feel I have graduated with so much to carry with me and so much to look forward to.”

When asked about her favourite Coke Studio memory, she reminisces: “It is perhaps unfitting that one of my favourite memories is non-music related, but here it is: I loved the downtime I got with the house band. The conversations and the fun we had on set in between the long hours of recording. Nearly beating our keyboardist Jaffer in a game of pool (on a snooker table), and having the percussionist Babar Khanna on my side rooting for me, made me feel so welcome and happy to be in Coke Studio. ”

Reinventing the Reel: The Monuments Men

Film Critic Jay Sizemore wonders whether George Clooney's passion for his new project The Monuments Men proved to be its...