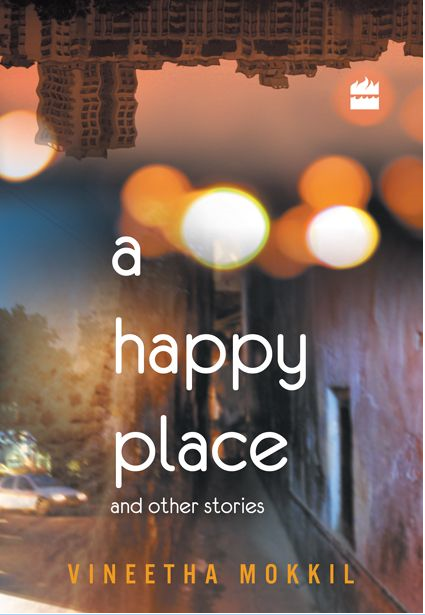 Vineetha Mokkil’s ‘A Happy Place and Other Stories’  is a promising debut. For those of us who covet covers (guilty as charged), the first look at the slim paperback volume is more than satisfying: the front image is an attractive blur of seething traffic lights at dusk. With inverted cement high rises against a violet monsoon-drenched evening, it sets the perfect tone for the sixteen-story collection.

From a Bollywood scriptwriter to a Marxist professor, a newspaper editor to a tattoo artist, Vineetha skilfully exposes the throbbing heart of modern Delhi, weaving tales of tantalizing heartbreak, beckoning nostalgia and fractured dreams. Her imagery is evocative, with vividly sensual descriptions of locales, weather and ambience. In ‘Nirvana’ she writes: “Summer smothered the city like a thick blanket. The night air was stifling; the heat writhed like a hungry creature in the wild.” And in ‘Orange County Blues’, “I wish this place would crumble to dust and let me come back home where the mountains loom and the breeze carries the hum of monks’ chants towards snow-capped peaks. In my dreams, I see the two of us walking down Dharamshala’s narrow, winding streets. The prayer flag flutters over our heads like rainbow-hued birds. The sun glides out from behind the clouds. The mist lifts.” Ultimately, what emerges out of the creative chrysalis/process is a rich vibrant tapestry, woven from a multitude of identities: transitory haunting snapshots of the complexity of everyday lives in a teeming metropolis.

The writing is sharp and eloquent, offering fleeting glimpses into the raw ache of human experience
The stories may be short in length, but they are not short on soul. In a few pages, Vineetha brushes upon myriad social and political issues with sensitivity, recalling the work of South Asian contemporaries Daniyal Mueenuddin and Kamala Das. Issues highlighted include the sexual harassment of domestic workers, the economic divide, flagrant corruption, war-torn Srinagar, marital infidelity, and the controversy surrounding homosexuality in Indian society. However, where Mueenuddin succeeds in tackling major themes such as feudalism and female ostracism up front and centre, Vineetha uses them as a backdrop to the emotional plight of her characters. This not only lends depth to the narratives, but provides a strong context to the characters’ motivations. In ‘A Quiet Day’, Vineetha delves into the horrific calm of a female suicide bomber seeking vengeance for the murder of her beloved husband and baby. “Should she take a shower before she leaves home? Ameena hesitates at the door of the bathroom, wondering if she should bathe. Of course this is a trivial detail. She knows it will make no difference, none at all, if she steps out unwashed. Her success does not hinge on personal cleanliness.”

In a style reminiscent of James Joyce’s ‘Dubliners’, some stories do not flow from a beginning to a definitive conclusion, ending quite abruptly. Though an intriguing literary device, the overall effect can be jarring at times, with the reader left bereft, seeking resolution. This is obvious in tales ‘In Case of Fire’ and ‘The Girl Next Door’. Arguably, this frees one to imagine what could happen next. As Will Self stated, “A short story is a shard, a sliver, a vignette. It’s a biopsy on the human condition but it doesn’t have this capacity to think autonomously for itself.”

No matter what the outcome, the writing is sharp and eloquent, offering fleeting glimpses into the raw ache of human experience. Gyan, the protagonist of ‘In Case of Fire’, describes his growing sense of frustration with his job at an Ann Arbor university: “The prospect of walking into lecture halls filled with placid faces made him want to scream. He wanted his students to be less accepting of his premises. Their indifference to the provocative statements he bandied around in class felt like an insult. He was looking to sharpen his wits against the knife blade of their dissent. He was hungry for debate, for quicksilver flashes of brilliance, for questions to spark animated, electric discussion. Where were the rebels dreaming of torpedoing the system? The renegades who wanted to tear down everything so a better world could spring up from the ruins?”

There are definite gems scattered amongst this eclectic collection. In ‘Nirvana’ the author reaches poignant, lyrical beauty. “She was the sinner, he the saint. She was ignorant; he had risen beyond desire’s demands — transcendent, luminous. He looked truth in the eye with stoic ease. She stumbled in the dark; her life, a litany of petty concerns: her body’s clamorous wants, her heart’s song. His life was a cosmic quest. Hunger, sorrow, desire, decay — he was tormented by enigmas as old as life and death.”

In a country like India, the modern world meets Asian values and flourishes in the guise of cities such as Delhi. However, strong pockets of conservatism exert a firm grip on both the people and landscape. A recent example is of a man who won a landmark seven-year court battle to prove himself as the illegitimate son of a leading politician. The indomitable influences of culture and the writ of the patriarchal system are just some of many issues that this book alludes to. The readers’ attention is drawn to both the splendour and the darkness of this cosmopolitan hub, which is mirrored in countless large cities across South Asia.

‘A Happy Place and Other Stories’ can firmly plant itself amongst the unique voices defining contemporary Indo-Anglican literature — a thoroughly welcome addition.

Maliha Iftekhar was, before going on maternity leave, Senior Fiction Editor for the magazine.

Editor’s Note: The author’s ‘Other Lives‘ was The Missing Slate’s Story of the Week on October 26, 2013.

B is for borborygmus…

Sarah Walmsley takes a trip down to Madagascar to see the lemurs, a curious species both endangered by humans and...