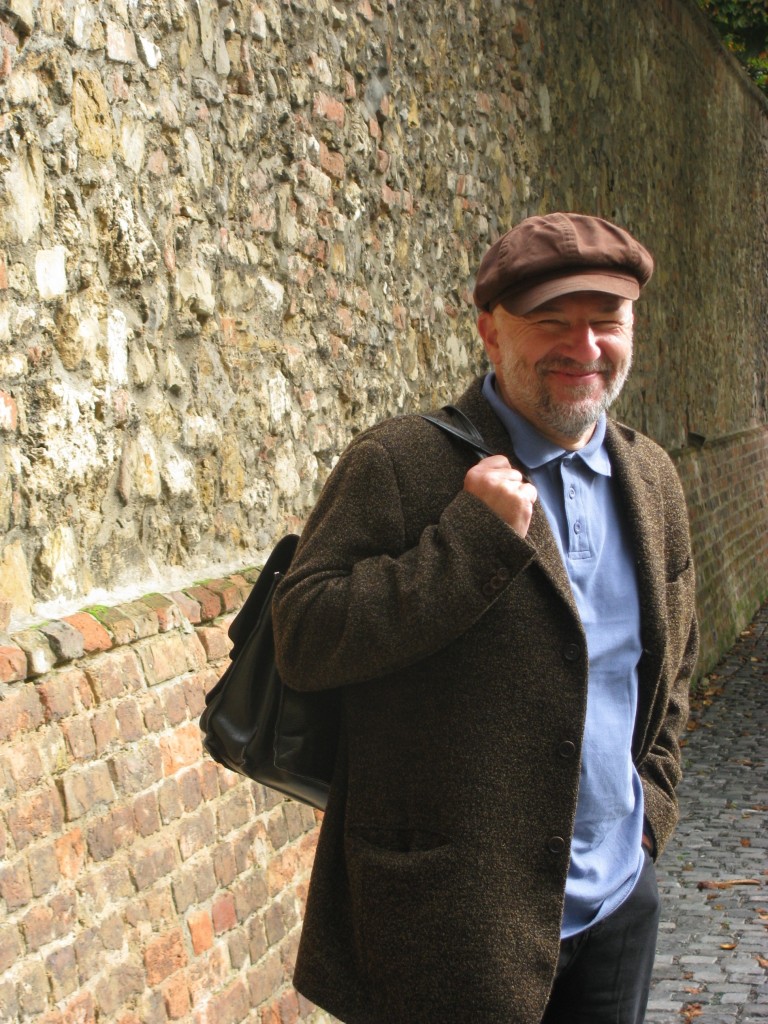 Our July Story of the Month, ‘The Wines of the Shakespeare Estate‘ is perhaps not a story at all — at least, not in any conventional sense. Zsolt Láng, translated from Hungarian by Erika Mihálycsa, explores a hypothetical Shakespearean ‘vinery’ and covers everything from Beethoven’s Ninth Symphony to ear hair. In our latest Author of the Month interview, Zsolt Láng answers Maliha Iftekhar’s questions on what lies behind our fascination with wine, whether the search for ‘truth’ is an integral part of writing, and whether we have a distinctive ‘terroir’…

It’s unusual (and captivating!) to see Shakespearean character attributes juxtaposed with wine labels.  What inspired your ‘short story in the form of wine labels’, and why did you choose Shakespeare in particular?

There are subway stations in Berlin where they have inserted miniaturized synopses of Shakespeare’s plays amongst the paving stones. You go down into the subway station, check your train’s arrival and, depending on your waiting time, you pick a bench to sit on: there are ten-minute, three-minute and one-minute benches and right under your feet is the appropriate text that would fill those minutes. It is probably the one-minute text that is the most difficult to phrase. “Two adolescents fall in love with each other, the parents oppose their union, they wed secretly, the parents rough them, the two die, the two families are reconciled…” No, the most difficult of all is probably the three-minute synopsis because it is long enough to include not only words but sentences. My initial intention was to translate these virtuoso texts into Hungarian, but I ended up writing the wine labels instead. How can one relate the story of Hamlet, for instance, with the notions and turns-of-phrase familiar from wine tasting? It was engrossing. Not to mention the engrossment of matching the labels with the appropriate existing wines (from the vinery of an acquaintance of mine). The “character” of the wine, the dramatic flavours and aromas had to correspond to the writing.

It takes me six years to write a novel and quite possibly it will end up in the litter bin once it is finished.
Wine has been consumed since before Biblical times, and has traditionally been a marker of social class and cultural refinement/taste. In Shakespeare’s time, wine was mostly consumed by the wealthy. What do you believe lies behind our primordial fascination with wine?

What exactly does the mystery of wine consist of? On the one hand, there is the issue of time contained in wine: the ripening of the grapes, the fermenting of the grape juice needs time. Then, time is necessary for wine to reach its full-bodied stage. It all functions like a novel… A further correspondence is that with neither is there any guarantee of success. There is simply no telling what the fermenting wine will be like, even if we go to great pains to do everything exactly as we did with the best previous vintage. It takes me six years to write a novel and quite possibly it will end up in the litter bin once it is finished. There are renowned wine-makers who simply pour their wines gone wrong into the sewer. But I have only recently mustered the strength to throw out manuscripts that have been in the making for years.

“The wine-cup is the little silver well, where truth, if truth there be, doth dwell.“ As an author, is the search for ‘truth’ an integral part of your writing? Or does truth reside only in each individual’s reading experience?

Truth? Frankly, I don’t know if I am interested in it. I am interested in research rather, in looking for a language for a hitherto nonexistent  world, which of course cannot exist outside that very language. In looking for a language for a hitherto nonexistent feeling, experience, sensation. I am interested in this act of ‘looking for.’ There you are, for instance, who is asking me these questions. I do not know you, have no inkling what kind of person you are. But I have already started sketching your outline for myself, starting from these questions. I try to imagine the way you read my answers, if your breathing quickens, if the rhythm of your blinking is altered. I try to conjure up your environs, your clothes, the sounds surrounding you. And above all: I attentively follow whatever your conjured-up figure starts off in me: whatever resonates in me, and in what way. To decode signals, and then re-code them into linguistic signs, this is what keeps me on my toes almost incessantly.

Your work stands out because of its originality, but “no artist of any art has his complete meaning alone“ — some readers would hear echoes of Borges, for example. Do you see your writing as part of a tradition?

“Tradition is the memory of the last failed attempt”, as Wilhelm Furtwängler used to say. I love this sentence; I am on good terms with every single word of it. On good terms indeed with its every word by itself: with tradition by itself, with the last by itself, with failed, with attempt, with memory by itself. I love fiddling with them, their sense preoccupies me. It interests me to see what they trigger off in me, or what others think about them. But if I had to compose all of them into a single sentence, then I think I would opt for placing them precisely in this sentence, in this very network of meanings. They are best positioned this way.

Terroir of wine is a concept that connoisseurs are passionate about. Do we also have “terroir”? Do you believe the lay of the land, the things we consume, the very air we breathe moulds us?

Yes. Writers, too, have a terroir. I myself live in Transylvania, which is a very peculiar region. A hundred years ago it was still part of the (then) Austro-Hungarian Monarchy. Now it belongs to Romania. It is an ethnically mixed territory with its many tensions. On top of all, I happened to be born into a bleak dictatorship — I will not go into the details. But then 1989 came and everything changed. 1989 was an event that became our real home. A revolution without revenge, a miracle without precedent, a salvation without a saviour. The army switched sides, the police forces switched sides, the workers’ militias switched sides, joining the people. A supra-ethnical event when Romanians and Hungarians embraced each other with fraternal feeling. Why did it happen? Perhaps because their thirst for love grew so unbearable that they needed this embrace imperatively. I cannot explain it otherwise. It was in this event that our particularity changed into something universal. This is our well-nigh tongue-tied universality that would, perhaps, be worth telling to the world.

Editor’s note: Our sincere thanks to Erika Mihálycsa for translating The Missing Slate’s questions into Hungarian and Zsolt Láng’s responses into English.

"The villagers say there is a door there, at the end of the canyon. Jaomora says it is fady. A...