What were some of those specific challenges? And what was your guiding philosophy in how you incorporated 3D into the film?

There are general provisions and proscriptions to shooting in 3D. There are “set” precepts via the anointed priesthood of stereoscopic filmmaking. As an ex-punk singer and artist, I think rules are made to be broken, and generally endeavor to do so. However, 3D is bound by the laws of parallax. Breaking those laws can result in a painful experience for the two-eyed viewer. 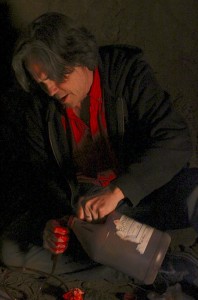 The precepts of shooting in 3D include a great deal of “safety” in the amount of negative parallax (stuff coming at you off the screen) and positive parallax (things in the distance, or “behind” the screen). The most conservatively shot stereoscopic movies still look magical, however, like a glowing diorama that you can, at the very least, reach into.

Of course, stuff coming at you is one of the things I enjoy about 3D. Not to an obnoxious degree, mind you, but ever since I first saw that claw coming at me off the screen in The Creature From the Black Lagoon, my expectation of 3D includes a certain amount of “fun”. We shot our movie in what we call Ultra3D, because we go a bit beyond the precepts in terms of parallax. Things come out from the screen a bit more than is “accepted”, and go back a bit more, as well. There have been no complaints of headaches so far. As Greg has said many times, 3D is as much an art as it is a science.

My other challenge in shooting Aztec Blood was that we used a fixed, wide-angle lens for pretty much the whole movie. 3D has a grueling regimen in terms of matching up the lenses. We basically had little time to change to lenses of a different focal length, re-calibrate etc. Therefore, in terms of story-telling, some of the grammar of cinema was not available to us. There were no zooms, there was no pulling focus, there were no whip-pans or over-the-shoulder shots. In addition, a wide angle lens tends to distort, which, as can be seen in my other movies, I really enjoy. But such shots do not work in 3D, because if you’re too close, the left and right eyes see extremely different things, causing a headache for the viewer as his eyes struggle to make sense of the illusion.

So in terms of 3D, there was much more brutal learning-as-we-went. Meanwhile, the clock was always ticking, the days were never long enough, and the sun kept getting lower behind those desert peaks.

The guiding philosophy was slow, flowing camera movement, or no camera movement. Let the actors move within the frame. Let the viewers’ eyes spend time in each shot, to enjoy the illusion of space and of life.

Your earlier features also sought to transgress the limits of sex and violence imposed on mainstream cinema at the time, working from a set of aesthetic principles mapped out in your Pulp Video Manifesto. Did this philosophy inform much of Aztec Blood? Or do you see it as a different entity altogether?

Aztec Blood is far removed from my earlier efforts, both on a technical level and conceptually. In terms of story, all collaborations are influenced by those who are collaborating. Greg made sure that things made sense in the story (something I am not always concerned about). He also did all the deep research into the Aztec god, Tezcatlipoca, who is the star of this movie and the rest of the trilogy. In terms of sex and violence, characters in Aztec Blood are mostly well-behaved, which can not be said of the characters in my other movies.

Aztec Blood does not lack its transgressive, splatter-gore flourishes —decapitations, green vomit, severed limbs, and a particularly nasty recurring gag that plays out all the way to the film’s end. So, in some respects, it doesn’t stray too far from your earlier work at all.

Thank you. I am still so very close to it. On set, the gore scenes were where I felt most comfortable, and in my zone.

The mummy has become one of the more marginalised figures of horror cinema. What made you decide to rescue it from the Universal Studios ghetto?

Truthfully, just the name (now gone!), and the desire to tell a story!

How have audiences responded to Aztec Blood thus far?

Audiences enjoy it. Once they realise that it’s appropriate, the laughter comes fast and furious. And the screams.

So should we expect a second wave of psychotronic horror films from Charles Pinion?

That would make me very happy! I hope to make Thousand Eyes — a dark, personal story — in Mexico City. That’s the burner I’m focusing on right now.

“She hears the crowing of birds outside,/ her neighbour cussing at the colony chowkidar,/ the petroleum cough of the retired colonel’s jeep…” Poem of the Week (October 29), by Rakhshan Rizwan.