With the new year there always comes a slew of cinematic intrigue in the form of the Academy Award nominations. A multifaceted selection of films will compete for the big prize of Best Picture and in 2015 a number of fascinating stories have been spotlighted. For Hollywood itself perhaps none of the nominees are more cutting, more satirically sharp and indeed crazier than Alejandro González Iñárritu’s Birdman, a wry look at modern celebrity and the struggle to keep up with an ever-changing digital and fame-obsessed world. 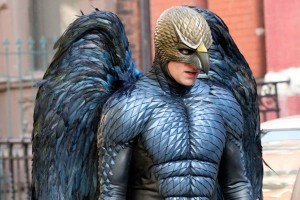 Michael Keaton must be commended for a career best performance as Riggan, an actor who made his name in a trilogy of superhero box office smashes but now struggles to live with his most famous role. This is not only a matter of him being unable to be taken seriously as anything other than “the Birdman”, for he is literally unable to escape his alter-ego whose voice permanently resides in his mind, beckoning him to make one more movie. The parallels with the real life Keaton are there, but this performance is so much more than the former Batman and Beetlejuice semi-method acting his way to critical acclaim.

With Riggan, Iñárritu has a mouthpiece for a biting commentary on Hollywood and American celebrity, the character’s every action inadvertently fuelling his phoenix-like rise from latter day obscurity back into the hearts and minds of the entertainment public. Keaton imbues the character with a wonderful sense of bemusement, often standing aghast at the bizarre things taking place around him as he struggles to put on a Broadway play and handle the egos of his fellow actors. He stands at the centre of a media storm and also a storm in his own mind.

In many ways the film lies open to interpretation, as much of the impossibility of the plot could very well be explained by looking at Birdman as the story of a mental breakdown. But it wouldn’t be proper to view this picture with such a narrow lens. The wackiness of balancing such implausible events as Keaton flying above New York and being in apparent possession of telekinetic abilities with moments such as his accidentally getting caught out in his underwear in Times Square (resulting in renewed social media interest in the old celebrity) speaks to the core question at the heart of Birdman. What is true madness? Is it the torment and tempest inside the mind of a troubled creative soul, or is it the world of celebrity itself, with its many contradictions and complexities that one can seemingly successfully navigate by pure chance given the right circumstances?

Mirroring Keaton’s self-parody is Edward Norton, who shines with villainous glee as a well regarded yet difficult to work with actor. Much of his mischievousness provides great comic fodder, such as his temper tantrum during a review performance of the play when Riggan attempts to take away the real vodka being consumed for the purpose of getting into character. The character at heart though is deeply sympathetic, a bleak sense of nihilistic narcissism masking a lonely soul who whenever confronted about being out of control or self serving will always fall back on the excuse; “it’s my process”. Moreover he is the perfect foil for Keaton’s Riggan, who is seemingly incapable of escaping being typecast. Norton is at once Riggan’s nemesis and also the embodiment of his aspiration, a versatile actor who can do whatever the hell he wants and receive consistent acclaim, despite his “process” making him unbearable to be around.

As an early standout in the Oscar race Birdman is notable, but even looking at the film without the spectre of the awards hanging over it there is a sense of triumph about the picture. Through over the top self depreciation both Keaton and Norton enhance their respective reputations, and further emphasize the crucial subtext of the whole movie. In the end everything about the entertainment industry is silly, overblown and impossible to truly understand. The fact that such a blunt yet outlandish attack on the craziness of Hollywood has landed the film such acclaim and awards buzz is therefore the best possible punch-line for a convoluted yet deeply enjoyable work.

Michael will be reviewing more of the Best Picture nominees over the next few weeks. In the meantime, check out Christine Jin’s review of Boyhood, and Tom and Michael’s capsules for The Grand Budapest Hotel and The Imitation Game!

“There is a lovely beach in a lovely town. You stand on the shore and see that the water is deep and dark so it impossible to know what lies beneath…” First Friday flash fiction, by Kiren Valjee.

"soon it will be dark and hard to find/ the faintest light.../ But the farthest point/ of this barren land...