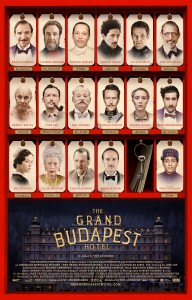 It’s easy to say that The Grand Budapest Hotel is the most accomplished film Wes Anderson has ever made, a supremely confident tour de force from a legendary director in his prime. Never has he demonstrated such metronomic comic timing nor so ingeniously exploited the dimensions of the frame, disturbing and manipulating his claustrophobically ordered mise-en-scène to the point of collapse. What makes it truly special, however, is that it’s a validation of his whole career and an intimidatingly masterful riposte to accusations of insularity and indulgence, contextualising his obsessive-compulsive stylisation against a real-world historical backdrop and establishing it as a manifestation of a precious worldview.

With its painstakingly decorated layers, the titular hotel is the ultimate Wes Anderson prop, a critic-baiting bubble of opulence reminiscent more of immaculate confectionery than reality as perceived by any age referenced in the film. Rather, it represents a certain fragile anachronistic sensibility beset by external threats of war, amorality, discordance and death; an ideal image of our history that may never have existed but that, like devoted concierge and blatant Anderson-surrogate Gustave H. (Ralph Fiennes), we must attempt to preserve regardless. Anderson has devoted his career to protecting artificial images — a brand of openly manufactured, nostalgic innocence — and if there’s any doubt he’s consciously self-mythologising here, it’s erased by the self-aware formal device through which the narrative is told. Mirroring the layers of the hotel, Anderson’s filmmaking and indeed history as a whole, the story passes through a nested structure of four different storytellers from four different eras, complete with their own aspect ratios. Far from widening the emotional distance, this historical prism frames the characters — their loves, struggles and glorious shenanigans — in a way that highlights how fleeting, how endangered, how important they really are.

What’s never been clearer is how Anderson aches to immortalise the ideals out of which his style has grown. Even as he pushes all his most controversial tics to their limits he’s simultaneously arguing that they matter, insisting upon his work’s value as a fortified stronghold in a darkening world. And if that world is ultimately too chaotic to be kept at bay, the divisive auteur will at least go down fighting, “sustaining the illusion with a marvellous grace”. 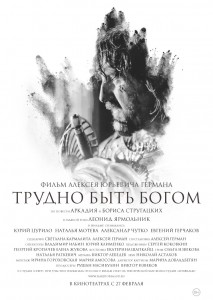 As the world went wild over Richard Linklater’s universalizing portrait of white male heteronormative adolescence, another epic-length film with a decades-spanning production history slipped beneath the cracks — a film far more radical and revolutionary than the former’s cellophaned nostalgia. Aleksey German’s Hard to Be a God, a freeform adaptation of Arkady and Boris Strugatsky’s mid-sixties SF classic, emerges from the sort of protracted gestation period that puts Boyhood’s twelve-year production to shame. German first began preproduction on Hard to Be a God in 1968, intending it as an allegorical response to the Prague Spring, but could not procure the funding to start shooting (albeit sporadically) until 2000. Production stretched out all the way to 2006, and the film soon languished in a purgatorial postproduction phase that lasted until German’s death in 2013. Completed by his son later that year, the final cut of German’s magnum opus premiered posthumously at the 2013 Rome Film Festival. That Hard to Be a God even exists counts as a minor miracle.

Hard to Be a God is not only the best film of 2014, but easily stands head-and-shoulders above its competitors as this decade’s greatest cinematic accomplishment: raw, richly textured, radioactively strange, and as fetid as a farmhouse romp. German pares down or excises the specifics of Strugatsky’s story — an allegorical tale of scientific observers stationed on a planet plunged in a perpetual Dark Ages — and uses it as the pretext for an unrelenting and totally visceral guttercrawl through a monochromatic, mud-caked hellhole. It unfolds like a gonzo-absurdist ethnography of an alien world, as if Robert Flaherty had lugged his handcranked Bell & Howell all the way to some interplanetary backwater and trudged through primordial shit alongside some bechainmailed warlord (himself a man “unstuck in time,” impotent and staunchly unheroic). Each shot unfurls like an antique fresco made of dampened plaster and smeared with human excrement, winding through German’s dirty and densely-packed recreations of extraterrestrial medievaldom with a woozy determination and verite directness. German’s film wallows in clatter, chaos, and visual putridity — a despairing and uncompromising valedictory work from one of our most iconoclastic filmmakers. 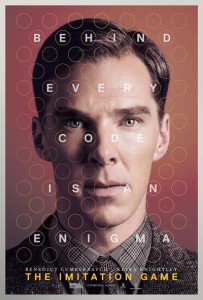 The story of Professor Alan Turing is of paramount importance, and The Imitation Game stands as a masterful telling of the great man’s story because it profoundly emphasizes what truly matters in one of the most appalling and tragic episodes of our modern history. There is no stark jingoism of the kind you may expect Hollywood to engage in when bringing an iconic figure of world history to the screen; and no room is ever allowed for triumphalism. The relief and ecstasy of breaking the Nazi Enigma code is cruelly short-lived as it becomes apparent that Turing and his team have thus taken on an unbearable moral conundrum, that of having to allow naval attacks and air strikes to take place so as to not alert the enemy that their encrypted messaging system has been decoded. It is an uncomfortable viewing experience that powerfully enforces the notion that there is no true glory in war, only the weight of countless dead upon the conscience of all who participated.

The conclusion of Turing’s story is however the most savagely horrifying to witness. A brilliant mind which pioneered much of what has today become the science of computing is mercilessly wasted thanks to abhorrently prejudicial and archaic laws of the day. To this end Benedict Cumberbatch, fast on his way to becoming the biggest contemporary film and television star, gives his most exceptional performance yet. It is impossible to see him crumble to the chemical castration enforced on him for the contemporary crime of homosexuality without feeling unequivocal empathy. Through his tears and utter resignation Cumberbatch does not just bring one of modern history’s great names to life, he also gives the injustice suffered by this real individual an iconic pop culture gravitas. Historians and scientists know the absurdity of Alan Turing’s end, and now moviegoers have quite dramatically experienced it vicariously too.

This must be considered one of the best films of the year because it carries a significant warning. Like 12 Years a Slave last year this is the cinematic cry of opposition to injustice and prejudice, and just like its powerful predecessor it simply cannot be ignored. 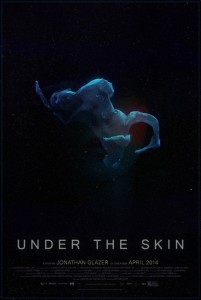 A film that at once invokes and inverts tropes of the predatory nature of female sexuality, Jonathan Glazer’s Under the Skin is as remarkable for what it gestures toward as for what it shows. Implicated by the film is the patriarchal structure under which Scarlett Johansson’s Laura works; the character’s sexuality is instrumentalized and commodified by a system that the viewer sees only hints of in the film’s mysteriously indefatigable motorcycle-riding men. Rather than functioning as some autonomous predator, devouring men of her own fickle whim, Laura’s sexuality is harnessed to provide energy/resources for a larger enterprise. The character’s progress and labour is monitored at all times by these men. Through this arrangement we’re given a de-familiarized picture of how patriarchal capitalism mobilizes and commodifies women’s bodies and work, alienating them from both themselves and their labour in the most essential way possible.

Glazer’s strategy for constructing the film, oscillating between compositions of sumptuous artifice and rough naturalism both aesthetically and in its performances, speaks to the dual nature of this critique. The artificiality of the film is anchored by its ethnographic hidden cameras. So too is the film’s use of science fiction anchored by the immediacy of its engagement with the content agency of women’s lives. We follow Laura as she begins to unravel an understanding of how the system in which she functions has estranged her from herself before the implications of this transgression are made violently material at the film’s climax.

By turns rapturously gorgeous and deeply unsettling, perfectly complimented by Micah Levi’s score that seems woven from the fabric of anxiety and love and borne by Johansson’s subtly removed performance, Under the Skin is a film that functions simultaneously as a nearly seamless science fiction work and as one of the most strikingly urgent critiques of how our contemporary system violently exploits women.

“El-Siq says, be patient,/ persist for your eyes and feet/ to deserve this journey’s exhaustion./ The road will lengthen between light and shadow,/ the sky will disappear…”
Poem of the Week (February 15), by Amjad Nasser. Translated from Arabic by Fady Joudah.