Jealousy, avarice, contempt and isolation make up the darkness at the heart of one of the year’s earliest cinematic standouts. Telling the true story of eccentric multi-millionaire John du Pont’s ambitious yet frightening attempts to secure Olympic glory by way of the U.S. Men’s wrestling team, Foxcatcher excels in unease and discomfort. Those familiar with the reality will watch with growing tension knowing that a dreadful outcome is on its way, while viewers not in the know will no doubt share the sense of growing disquiet as the story progresses. Director Bennett Miller has crafted a work of genuine tension, and for that he deserves to be commended. 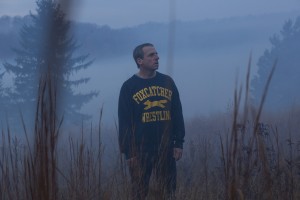 The true success of the movie’s storytelling lies in a trio of uncharacteristic performances, the most notable of which comes from Steve Carell as John du Pont. Though more widely known for comic roles of wild exuberance Carell has proven his dramatic chops in works like Little Miss Sunshine, but here he truly crafts a role that is quite unlike anything the movie-going public will be used to seeing from the erstwhile U.S. Office star. Most of the time quiet and always calculating, Carell’s du Pont is like a coiled spring. There is always an uneasy feeling about the character, that the guy is just somehow…off. The genius of Carell’s performance is the way in which he teases, bit by bit, hints of his character’s madness. A little snippet of unsettling insight here, an odd piece of behaviour there, a couple of strong outbursts, through it all he drives the growing unease of the audience.

His main counterpoint throughout the story is Olympic gold wrestler Mark Schultz, played in a similarly out of character fashion by Channing Tatum. An action hero and oftentimes like Carell a comic performer on the big screen, Tatum imbues this performance with much the same mix of understated aggression as his co-star. Amateur wrestlers are trained not only to be physically tough but also in the art of the poker face. Hiding emotion is crucial to victory, and for a large part of the story Tatum plays Schultz with quiet and humourless bitterness. Like du Pont, though, Schultz also gives up his true emotional state little by little through verbal and physical outbursts, and the growing sense of this great athlete finding himself incapable of escaping du Pont’s emotional bondage further instils that pit-of-the-stomach tension in the viewing audience.

But while du Pont and Mark Schultz both wallow in barely contained despair, their emotional turmoil is offset by Mark’s older brother Dave, played by Mark Ruffalo. Though much of the story centres on the relationship between du Pont and the younger Schultz, it is really Dave that completes the narrative and truly focuses the tensions of both of his fellow characters.

Simply put, Dave is happy and they are not. As the older Olympic gold winning Schultz brother Dave is more highly regarded among the athletic community, which gives Mark a sense of one-sided sibling jealousy that proves quite destructive. This is amplified by du Pont who sees in Dave a higher calibre alternative to Mark for his ambitions of bringing home Olympic gold as a coach. Ruffalo portrays Dave with a kind of aloofness; the family man knows how good he is and for that reason doesn’t take life quite as seriously as those around him. He also acts as the on-screen representative of the audience, growing ever more disenchanted and even fearful of both du Pont’s state of mind and his brother’s wellbeing. In many ways his character is punished most of all simply because he lives the happiness and success that both du Pont and his brother truly crave.

For sheer character driven intensity there is no picture quite like this one out in cinemas during the awards season. There is an absence of the black humour that makes Whiplash so uniquely unsettling, and unlike American Sniper very few questions have been raised about the accuracy of this dramatic retelling of real world events. What you get with Foxcatcher is a gradual and deliberate descent into insanity that captivates at every turn, and certainly one of the most powerful pieces of cinema yet released this year.

“…at daybreak at noon/ the sun’s feeble shafts/ step into the room…” Poem of the Week (March 10), by Martyn Crucefix.