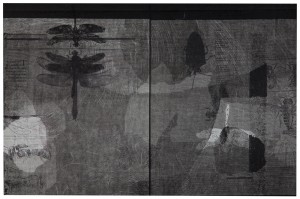 Now I come to you full of future. And from habit we begin to live our past.
~ Rilke

Middle September of a London pavement
A pocketwatch, compass, my divided time
On a wall of two clocks; subtracted footsteps
And Eddie Mair’s Midday precepts
A voice from home lures a notch
For every trench coat I inquire after
At a Turkish showroom in High Holborn

“You don’t look Indian,” is probably the best
Compliment the saleswoman can manage
“I might be Turkish,” I surmise
And she blushes remarkably—a virgin blush—
On her almost-first-sale from an unbusied Sunday
How much for a blush? I wish I could ask.

There are shreds of time in my pocket today
And, I hardly listen to her, for I
Am waiting on a Brentford wharf for one
Voice from home that counts my return
As if in a timeworn tavern from a Mediterranean poem—
A tussle for nectar, a whispering spectre
Rising like the descant of onion-domed
Church bells chiming Ave Maria de Lourdes

The ticking of the pocketwatch instructed me
You can’t belong so far from me
Cold, metallic, feminine voice
Overripe mutations from bronze to flesh
To rust and sluggish termites
To a million grafted red poppies
At the Tower of London, where the voice fell
Something to shatter that surreal coffin
The metal, the glass, the broken pocketwatch
Now buried in a red ceramic sea

Tonight by the Georgian plaques of Fitzroy square—
Along Dickens and a namesake and other such names—
I was walking without that voice of time
But the ticking remained, returning by
And by like Hamlet’s cuckolded father
The real is a virtue for the virtual to rile
The time was so pure, the spaces virile
A voice asks me for a light
The face of a woman, it wants to talk
To me, they like wretched nocturnal faces
But for your dear stranger
I should not be so composed
The knitting women are singing
The last carols of the weekend
I have yet to kiss a memsahib, I wonder
Should I?, as time among the poppies sleeps…

"...neither time nor God belongs to anyone./ The birds know this as they peck ruby seeds/ from fenced-in pomegranate trees..."...