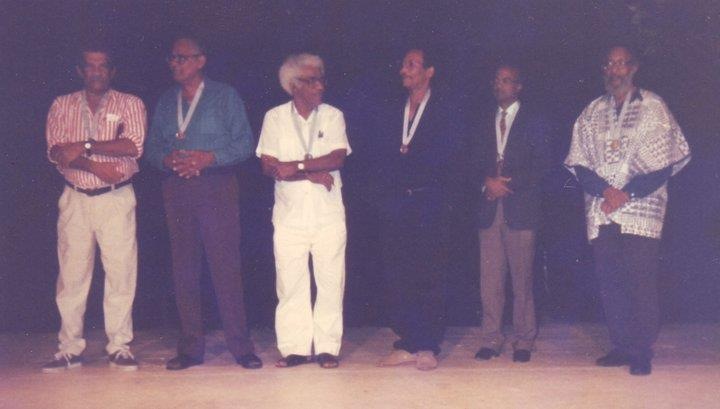 When Barbados-born Edward Brathwaite (he had not yet taken the name Kamau) returned to the Caribbean from Ghana, he came first to St. Lucia. From 1962-1963 he was Resident Tutor of the Department of Extra Mural Studies of the University of the West Indies in Castries.

During that time he became involved with the artistic and cultural life of the island. Among the programmes he planned for the Extra Mural Department were Political Education, Drama, Art, Community Development, A study of developing societies, Business Administration and Current Affairs. Lectures, seminars and radio features were used to deliver the programmes as well as regular classes. He called for Film and Literary societies to be established by the Department, as well as a Drama Workshop. Ever the regionalist, he wrote that “Inter and extra-Caribbean cooperation in the field of the arts is as important, if not more so, as cooperation in the political and economic spheres of endeavour.”

In June 1963, he edited ‘IOUANALOA: Recent writing from St. Lucia’. Iouanaloa was the old Carib name for St.Lucia, meaning “the place of the iguana.”

It was dedicated to Sir William Arthur Lewis, son of St. Lucia, first Vice Chancellor of the UWI (and later Nobel laureate for Economics, in 1979). The single issue contained articles by several persons, including Brathwaite and his wife Doris; Harold Simmons, who had been tutor to both the young Derek Walcott and Dunstan St. Omer, and others of the Golden Age of St. Lucian arts and culture. Simmons — journalist, archaeologist, painter among other talents — contributed a seminal piece on Folklore in St. Lucia, still in popular use by researchers; Dunstan St. Omer, the major St.Lucian painter and church muralist, wrote on the artist in society; Fr. Charles Jesse, whose ‘Outlines of  St. Lucia’s History’ remained the definitive history of the island until recently, wrote on Ancient Universities in the New World.

Brathwaite contributed an article on “The use of radio in a developing society” and made the case for greater use of radio in adult education. He believed that the radio service then existing, the Windward Islands Broadcasting Service (WIBS) that served the Windward Islands of St. Lucia, Grenada, St. Vincent and Dominica should be used for “news and public information, Education and entertainment.” For him, “on WIBS at the moment, enlightened news and public information is unduly limited.” Ever the visionary, he saw clearly, in those still-colonial days, “we have to provide programmes for ourselves…there is still too much reliance on overseas products and distrust of the local, and not least in the field of education.” At the end of the piece, he hoped that WIBS might “help to nurture a West Indian cultural renaissance.”

Unfortunately, from the point of view of St. Lucia and the Windward islands, in 1963, Brathwaite moved to Mona, Kingston to lecture in history at the UWI. However, the rest (as they say) is literary history.

In the 1970s IOUANALOA was revived by Patricia Charles, who had contributed reviews of Caribbean novels to IOUANALOA, and had later become the Extra Mural Resident Tutor. Under that title she published first collections by Earl Long, John Robert Lee and Kendel Hippolyte.

The St. Lucian editors of the latest anthology of St. Lucian poetry and art ‘Sent Lisi: Poems and art of Saint Lucia (2014)’, Kendel Hippolyte, Jane King, John Robert Lee and Vladimir Lucien,  who regard Brathwaite as both a personal friend and a significant influence on their work, contribute poems and prose to this special St. Lucian tribute to Kamau, celebrating his 85th birthday. McDonald Dixon, to whom ‘Sent Lisi’ is dedicated, also contributes, as does Irvin Desir, one of the lesser-known poetic talents of St. Lucia. Gary Butte, a talented St. Lucian artist, shares two pieces from his latest exhibition, alongside sculptures by Jallim Eudovic and work by the late Sir Dunstan St. Omer.

"while your arms fill with arms / that are not yours, are covered // with shallow river water / flowing...