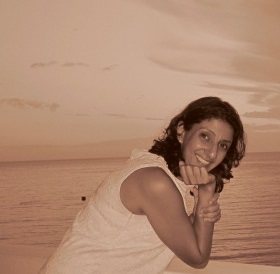 Farah Ahamed is a Kenyan lawyer with a Creative Writing Diploma from the University of East Anglia who currently lives in the UK. In 2015, her story ‘Red is for Later’ was nominated for the 2016 Pushcart Prize and the Caine Prize for African writing. In the latest installment of our Author of the Month series, she talks to Cecilia Greco about the necessity of self-belief for writers, and finding peace in the solitary nature of writing.

How has growing up in Nairobi influenced and informed your writing/storytelling process?

After its independence in the 1960s and during the 1970s and 1980s, Kenya was still in the midst of violence, tribalism, corruption, and the disruptions brought out of political changes. Nairobi was volatile and inhibiting, both socially and culturally, and I tried to find meaning in my environment. Nothing was constant or reliable. So what endured? Was there any person or any institution that could be trusted?  Was it familial relationships or societal connections or communal and tribal loyalties? Was it religion or God?  Was it creativity?  Where did one find solace and significance? How did people persist when their lives and relationships were in flux and they were affected and hemmed in by religious, cultural, political, and social structures which themselves were in upheaval?

I find that my characters inhabit their spaces naturally. They are who they are and they live where they do.
You have an LLB, an MA, and a Creative Writing diploma, you’ve worked with a Human Rights organization in Uganda and co-founded a campaign to help underprivileged girls with menstrual hygiene management. With so much on your plate, and so many opportunities, what was it that drew you to creative writing? What caused you to sit back and say, “I have to write”?

I found some kind of peace in the solitary nature of writing. I wrote to the questions that kept me awake, to try and make sense of my world.

I read that you are working on a collection of short stories written in various cultural contexts, namely African, Asian, and European. Why these particular regions and by which mode(s) do you tie them together in your writing? What are the main themes you focus on cross-culturally and what do you aim to accomplish by placing them in a fiction context?

I find that my characters inhabit their spaces naturally. They are who they are and they live where they do. Their lives are complicated because they are influenced by and not exempt from the social and political changes around them and the cultural spaces they move in. I just write about what happens to them, what they do or don’t do, and try and stay as truthful as possible to them and their experiences.

Do you have any other writing projects in the works?

I’m working on two projects. The first is an interlinked short story collection set in London. The stories are about the personal life of a musician who plays the harmonium. It explores how classical Indian music influences her mood and relationships. ‘Raag Marwa’, published as Story of the Week in The Missing Slate, is one story from that collection.

The second series of stories are based in East Africa. The characters in these stories all experience alienation and disconnection. They search for meaning and question the value of their actions, and the importance of their lives. In ‘Red is For Later’, published in Behind the Yellow Wallpaper, by the New Lit Salon Press, a woman questions her significance in her relationship. In ‘A Safe Place’, Kay challenges her husband’s tribal loyalty to The Party.  In ‘The 11th Commandment’, Sam joins a Christian fundamentalist cult called The Movement.

Finally, what is the main thing you would want any aspiring writer to know when setting out to write fiction?

Fiction writers need, aside from an imagination and self-discipline, a strong sense of self-belief.  A new writer has to develop and trust their own instincts and judgement. And learning to be patient so that in time, you can cultivate some sort of internal self-conviction and independence to be yourself in your writing. And nurturing that disposition comes from doing the work, and rewriting and rewriting until you recognize each sentence as a thing that is true for you.