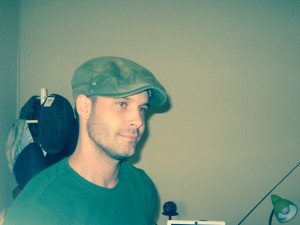 N.V. Baker is a short story author and poet. His writing is inspired by the resulting confusion of existing as a stymie tethered between the imagined and the rendered. In the latest installment of our Author of the Month series, he talks to Abbigail Rosewood about the miracles of collisions, how every good story is a failure of invention, and about our obsession with tragedy.

You have talked about being tethered between the “imagined and the rendered”. It is in this third space, I think, that narrative exists. Can you talk more about that?

I think narrative is, by its own nature, imperfect. It has to be. As writers we struggle to perfect an idea, to shepherd it through from genesis to fruition. You want the narrative to have its own shadow, so to speak. So you craft it. You winnow at the embers. And before you know it the thing has gotten away from you. It’s out of its harness, it’s caught to the grasses and then it crowns wild up in the trees.

So the narrative and the author end in discord. The author is terrified by what was created and what wasn’t. It’s Frankensteinian. In essence, you could say the author is in a constant state of failure. I would hazard that every story ever told is a failure of intention. Or at least the good ones are, the honest ones.

In “Lint,” a miracle happened. At least that’s what the narrator calls it. The physical reality of that event is violent and haphazard. Yet a series of happenings have to line up perfectly for that moment to be possible. Do you think it is possible for an occurrence to stand on its own, untethered to the past or future?

There’s a large philosophical debate on that. I don’t know. I don’t think anything really ends, that every event has a real echo of some sort which projects into the future. Even if no one is in the forest to hear the widowmaker crash down, as it were. And since I suppose I accept that, then the present must also be the bedform of such currents.

That was a great failure of clarification, wasn’t it?

Another way to put it is that there’s very little space in our existence. And collisions are our lives. Are the collisions predestined? No. But they affect each of our trajectories. New collisions are symbiotic on past collisions, or the lack thereof. That’s getting at it a little better, I think. At least that’s what the story was trying for.

Are meanings “imagined” or “rendered”?

That’s a good question. In “Lint” the protagonist has a bitter relationship with fate. He views meaning as imagined, or humanly ascribed, but he can’t shake the history of it. That’s what makes this protagonist kind of fun. He sees both sides and finds them equally unbelievable. I mean, how can meaning be simultaneously concrete and fallacious? It’s a paradox for him. His honesty is refreshing. He’s apathetic, but not blind.

What are the consequences of witnessing something for oneself versus learning about it from other sources like the news?

Ah, now we’re really getting out of the story. I’d say we are a generation that excels in the second-hand experiences. We are experts on everything and experienced with next to nothing. That’s why it was important to make the protagonist a veteran, which is more suggested than anything else. The flight simulator. The ground. Two very different things.

There’s this really great moment at the end of the story where it isn’t clear what happens. The younger man is stuck, bleeding badly, and our protagonist is looking for a weapon. It seems like he, the protagonist, means to put the younger kid out of his misery. Then he kind of blanks out and they are driving down the summit towards the diffused glow of a vale town. What happened? What shape is the younger guy in? What kind of weapon did the protagonist find and what use did he put it to? That’s nice. There’s no answer. There’s no inflated nobility about anything, no advertising. The audience doesn’t get to pretend like they were present. The audience doesn’t get to steal.

I love the paragraph where the narrator gives a list of miracles, “like being molested. Or a robbery. Or AIDS. Or a war. Or that submerged root or rock catching at your foot just perfect as the water jumped above your head”. In our particularly confessional time, painful experiences have become currency. These items on the list are things that irrevocably change a person. Why do you think we seem to need such catastrophes?

That passage is actually my favorite of the story. It makes a wonderful satire of terrible things. Historically, people traversing through bleak events are the primary content of our sacred stories.They make up just about every religious narrative that I can think of. Not to mention our fairytales. Our movies. And, yes, our books as well. Tragic events are didactic. Especially a series of tragic events, that’s real paydirt! But when tragic events become a statement of worth, a spectator sport, tragedy becomes threadbare, an eyeroll phenomenon, a peeing tournament touted as a form of grim wisdom. Look at me, I’m horribly special! Can altruism exist with such a mentality? I don’t think so. People who drown do so quietly.

I think that dynamic is, in some sense, where all this really fun postmodern writing comes out of. Not that “Lint” is in that vein, but there’s an authenticity that comes out of writing that treats painful personal events flippantly. Take someone like George Saunders, for instance.

Both the men are nameless. They’re as unknown to the readers as they are to each other. Yet they grow easily into an intimate conversation. Of all the topics they could pick, they talk about marriage. Why this choice? What are the settings and circumstances that encourage this kind of sharing between strangers?

I liked to putting these two characters together because they seemed similar to me. Hence the lack of names. But it’s fun because they exist in differing chronological phases. One’s young, one’s older. One’s a confident neophyte, the other a jaded shell. It’s almost as if they are meeting different versions of themselves, if that makes sense? And there’s a kind of begrudging fondness they share for each other that came about quite organically on the page. The marriage conversation is about the dilemma of asking a wiser person for advice and knowing that the asked-for wisdom is going to be balked at. There’s no eureka moment. The younger character is more enamored with his ability to ask the question that he gives a poop about the answer he was asking for. Isn’t that all of us?

Do you have any favorite character, place, or theme you tend to return to?

Every story is different for me when I’m writing it. I can only see similarities retroactively. But the past is often a theme for me. Recently I have been interested in isolation. Like the truck in “Lint.” Or the weather. There’s these subtle, normalized prisons throughout the short journey. And it’s in the shared isolation where the real conversations happen. We learn more from a crowded space in the subtext. Isolation is more of a claustrophobic microscope. I like that. And because of the snow, there’s all this really neat negative space happening all the way until we hit the summit. Then everything opens up. What we see is vast. And in that open space is where trouble strikes, of course.

Do you have anything in the works? Anything we can look forward too?
I have a fun story coming out next year in Weber: The Contemporary West. All I can say is that it’s a kind of noir Neverland story. It deals with the consequences of complete childhood freedom as sanctioned by the parental units. What could possibly go wrong? It’s my ode to the pain of hippy kids.