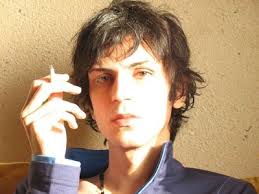 What is most immediately striking about Payam Feili’s first novel is its sheer weirdness. A series of drug-induced reveries presents three men, apparently garrisoned in a coastal town on the Mediterranean either following or during an unspecified Middle Eastern war, smoking, hallucinating, carving a statue of the Queen of Israel. But this remarkable work, part confession, part visionary meditation, most of all a deeply personal account of love and sexuality under taboo, moves beyond baffling delusion to achieve an enticingly rich complexity of political, interpersonal and emotional tension.

The narrator (significantly, we are never given his name) declares immediately that

“I am twenty-one. I am a homosexual. I like the afternoon sun.”

He is passionately in love with the man he calls Poker:

“He is twenty-one. He likes the afternoon sun, and he is not a homosexual.”

Payam Feili is also a poet, and his fiction approaches poetry in both its lyric beauty and its skilful control
From this comparatively simple beginning emerges a picture of a tormented young man struggling to come to terms not only with his sexuality, with what he feels to be the feminine nature inside him, but his past, his relationship with his mother, and above all his pathetic – or tragic – closeness to the man he loves and cannot have. The tale is told with an intimacy that combines personal intensity with more general, wide-ranging comment on what it means to be gay in a society where homosexuality is punishable by beatings or even death. The narrator questions his position with a measure of objectivity without losing any immediacy of feeling, asking for example why it is that “I sometimes even feel emotions that are specific to mothers.” The reflectiveness achieved is conveyed through a kind of intoxicated connection to history, as the narrator talks to, even makes love to, the pharaoh Akhenaten, and, through a complex network of symbols, explores the status of the Jewish state in the Middle East and its parallels to his own plight. The political significances of the novel are by no means easy to decipher, but are suffused throughout the narrative like the scent of bitter almonds – a smell that evokes the mustard gas used by Iraq during the Iraq-Iran war. The one explicit glimpse of the war that the narrator himself has fought in is brief, but its horror will resonate as conflict goes on still today in the Middle East:

“With a small piece of insanity in our pockets, we searched for Benyamin’s life among the dead. But it was as if he was so dead that he could not even be found among the corpses.”

Payam Feili is also a poet, and his fiction approaches poetry in both its lyric beauty and its skilful control. The mix of registers is strangely compelling: “Hey! … You glorious mother of Israel from whose mouth divine rivers flow and on whose brow the bright lights of the Mesopotamia glow. I am here, my body is burning. Do you not have any Mediterranean healing plants?” Moments of clarity and ordinariness emerge from the mysticism of the hallucinations, and surprise us with their directness of movement: “I get up. In a single gulp, I drink the wine Akhenaten has brought, and I wonder how many stars shine in unison in the sky over Israel.” The prose is structured in a sophisticated framework of repetitions. It builds and moves towards a startlingly open ending with artistic control reminiscent of music. There is drama that would be worthy of a full orchestra or an opera, and then the penetrating pathos expressed by a single lonely voice crying out in the desert.

This is a novel that dwells in and grasps at the ephemeral, and, remarkably, it manages to achieve that impossible feat of recreating a dream so that it retains all its integrity, without taking on the foreignness with which our dreams inevitably become tainted when we view them from a distance. Just as the mother in the story “produces a troubled dream from among her dreams and holds it out to me”, so Payam Feili is able to isolate and hand us a perfectly-contained vision that is coherent in its own strangeness. The characters, too, are imagined as possessing a deep level of consciousness that makes them very much alive and correspondingly unknowable. We are constantly being taken in unexpected directions in our understanding of both the novel and its characters, and perhaps this is convincing precisely because human emotional reality is so surprising, so perverse. Ultimately we are left with a sense of something grasped that nevertheless fragments and remains elusive, like “An altered image of a name vanishing in the fog, syllable by syllable.”