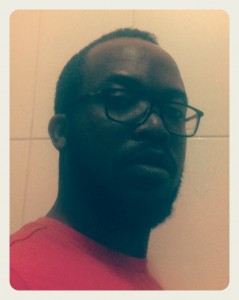 Zino Asalor is a writer of fiction and poetry, currently based in Port-Harcourt, Nigeria. His work has been published in several literary magazines including Sentinel Nigeria, New Literati, Saraba Magazine and Glossolalia Flash. He is currently at work on his first novel. In the latest installment of our Author of the Month series, he talks to Haseeb Ali Chishti about the role of the arts in enacting social change and the all too frequent disparity between belief and action.

Your story ‘Rebecca‘ struck quite a chord that’s been twanging inside my head for a while, that evil is not always deliberate but, rather, is an inevitable slide. It is a feeling you captured very well when you spoke of “…the duplicity that often corrupted good intentions, making possible the collapse of great nations, their schools becoming hotels and even brothels, their men laying waste to the very lands they had sworn to protect.” Do you think that this can in any way justify evil?

Not so much justify as give context, a postscript, if you will, that says, “Hey, you know what, I did not start out this way.” Life rarely presents such opportunities, and even when it does how much value is explanation accorded anyway? Not much. The consequences are just as damaging regardless of how one started off. Casualties are recorded, and for those unfortunate ones there is no justification. That only exists in the minds of perpetrators, and those who write and read their memoirs.

The protagonist in your story, Samuel, was the spitting image of a disenchanted intellectual, writing newspaper columns that, “…more or less arrived at the same conclusion week in and week out: life was a cycle; the world was a mess; humanity was its own undoing: the day of reckoning was coming’. As someone living in Port-Harcourt, Nigeria, a country with seemingly intractable social, militant, and economic problems, what do you think the role of public commentary is? Does it serve any purpose other than absolving oneself from the responsibility of taking ‘action’?

The musician and poet Tupac Shakur once famously said, “I’m not saying I’m gonna change the world, but I guarantee I will spark the brain that will change the world.” I believe this to be the single undeclared hope of the arts. Does public commentary serve any purpose other than absolving oneself from the responsibility of taking action? Sure, it does. Does the act of writing sometimes absolve one from the burden of action? Yes. But there are no absolutes. The spark is an end in and of itself. What becomes of the flame, if there is one, is another story, which leads to another end. The success or failure of public commentary depends largely on the people involved, by which I mean those disseminating and those receiving. In the right hands, it can be a powerful tool through which one can unite, engage, or at the very least provoke, people, but as we sometimes observe, it can also be an effective weapon of distraction, deception. Sometimes it can be completely useless, as in the case where people refuse to be sparked. Silence, as they say, requires that two or more people be in agreement.

The story hinges around the alleged molestation of Rebecca at the hands of Uzor, who she was sharing an apartment with after her slum dwelling were cleared away for being illegal, a news-story that Samuel had noted with the throwaway attitude of ‘unfortunate, but necessary for development’. Living in Pakistan, I frequently come across stories of slums being demolished to make way for luxury apartments or shopping malls – how do you view this ‘development’ taking place in developing countries? Was Rebecca’s plight a wake-up call for Samuel that such development often tramples on the lowest of the lows, the people that need help the most? How much do you subscribe to the Western notion of progress?

I view it with a hint of suspicion. While one understands the need for a constantly improving society, the costs are often high, driven by self-interest, greed, and almost always the poor and powerless in society bear the brunt. As to whether it was a wake up call for Samuel, I would imagine that he was never unaware. Attention and empathy though are two different things. Even among those who are concerned, there is a tendency to gloss over things as if they were abstract. Misfortune becomes real when it strikes close to home.

Going back to the harassment of Rebecca by Uzor, there was something quite shocking and liberating about the way Rebecca disclosed the event to Samuel, “‘…this boy waits for me and in the night when I’m sleeping this animal will be…will be… fingering me.’ As if to leave no room for doubt, Rebecca held up her index finger, short, thick, crooked at the tip.” The reader can feel the tension evaporating from within Rebecca once she’s managed to voice what happened to her.
There is a growing conscience around shattering such taboos as evidenced by the number of online crusades such as ‘girlsatdhabas’ and ‘Happytobleed’ campaigns taking place in India and Pakistan right now. Are such movements stirring in Nigeria as well? How important do you think it is to let the ‘victims’ speak up against such harassment?

Yes, there are such movements, doing laudable work, but they’re not nearly enough. Much work still needs to be done to challenge minds that have long grown comfortable in their prejudice. A lot depends on people willing to rise up, to spark and be sparked. There has to be political will too. Laws need to be updated, enforcement policy defined, personnel re-trained. It all leads back to the spark and flame analogy.

Belema was the most enigmatic character in the story, notably because she was the weight of reason on the pendulum of Samuel’s conscience, and because she understood Samuel better than perhaps he himself could. The ending of the story is very clever because it leaves you feeling exactly how Samuel says he feels all the time, “Like prostitutes at the front pew at mass, he could see to both sides of an argument, and ultimately chose one, but often, in the depths of his mind, juggled both opinions.” How valid is such a viewpoint (of juggling both sides of an argument) for an individual?

As valid as the likelihood of a prostitute attending mass. Actions often contradict beliefs, and views change fluidly. Thieves pray fervently to God before carrying out an operation. The wife beater becomes an activist when his sister is on the receiving end of violence. Anti-corruption Czars are revealed to have enriched themselves from the loot they were tasked with recovering. This is not simply hypocrisy in action, but the result of a thousand little moments of indiscretion, opposing thoughts struggling for dominance, falling one way today and another tomorrow. What others see of us and vice versa is often the result of a great and ongoing internal struggle to appear consistent.

“One of Humpadori’s organising principles might be the deceptive kookiness with which it expresses its existential concerns; its aesthetic gaudiness at first seems brash and colourful, but over time seems increasingly oppressive and threatening…” Dave Coates reviews Vidhu Aggarwal’s debut collection.

The Everyday and the Absurd

"Both Verkaaik and Ring look at ethnic violence from around the political lens, rather than directly through it." Nabeeha Chaudhary...