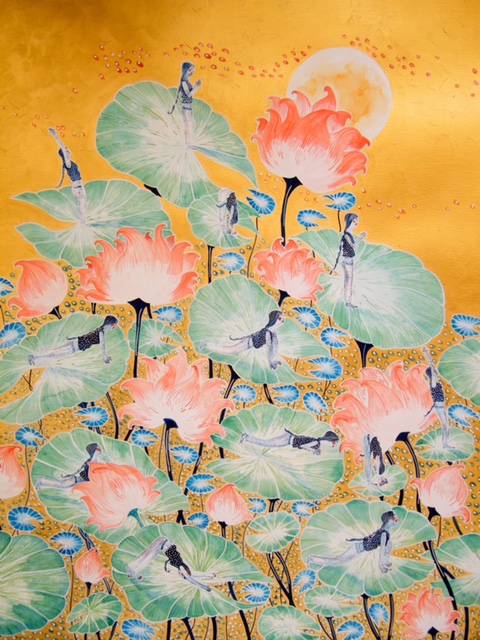 Translator’s note: Andal, 9th-century alvar mystic poet of South India, is credited with the great works of Classical Tamil literature, ‘Tiruppavai’ and ‘Nacciyar Tirumoli’, which are still recited today. Eschewing earthly marriage, Andal sang of her great love for Vishnu, the Preserver in the Hindu pantheon, and is said to have merged with him in his temple in Srirangam, Tamil Nadu when she was sixteen. Andal is considered an incarnation of the Earth Goddess. The ‘Tiruppavai’ (The Path to Krishna), thirty lyrical verses of congregational worship, was composed when she about thirteen. In the fourteen songs of ‘Nacciyar Tirumoli’ (The Sacred Songs of the Lady), she sings of her personal need for spiritual and sexual congress with Vishnu; for her the body is the site of the sacred. Both compositions are included in the 10th-century compilation ‘Naalayiram Divyaprabhandam’ (Four Thousand Divine Compositions) that Tamil Vaishnavites consider on par with the Sanskrit Vedas.

Dear mothers, can’t you see I quiver when you say ‘Madhava’? I’m cut bowstring vibrating
for his touch. Your counsel’s incomprehensible like the deaf talking to the dumb.

His mother he left to be reared by another. Will he recognize me? Will his love hold fast?
Confusion wrings me. In Mathura he killed mighty wrestlers; I crave his
stranglehold

I implore: take me to his holy city.

Uncover me. Why should I wear modesty when the world knows of my barefaced love? If you wish to be dazzled anew by me
there’s only one cure: I must see the lord of illusion.

He appeared as a dwarf but covered worlds; he’s seeded and grows bursting boundaries. Why
clothed me in convention? Let rapture recapture me.

I flame towards trembling stars. Take me quick to the magician of Ayarpati.

The lord of mystery has revealed his form; his beauty entraps. He’s playful,
delighting in lure and scandal. I’ll play his game, become invisible.

Drape me in stealth, carry me through night’s inky throat and abandon me at Nandagopal’s door. I’ll sneak into his family like a kicked pebble.

Mothers, experienced ones, don’t you see my condition?

Though blindfolded by saffron paste the eyes of my breasts open to seek him who clasps the discus’s ringed fire. They shrink from mortal sight but search for his mouth’s dark hold. I’m inferno longing for Govinda.

Don’t find me another; leave me on Yamuna’s moon drenched bank. I’ll quench. Here I shan’t survive an instance.

None of you understand my divine disease, o tender mothers, don’t suffer for me.

Only his wild caresses black as the star-tossed ocean can cure me. I’m flaying fish and flood.

Take me to the riverbank, to the kadamba oak there. From its leafy hood he leapt to trample Kaliya’s reared heads. In that battleground alone shall my passion be quelled. I’ll calm in him as tree becoming seed, potential expanding.

Vast dark clouds, flowers burning amethyst as his eyes and sapphire as his body, lotuses tender as his skin urge: ‘Go to him! Go!’ to Hrisikesa who though chief among gurus waited sweating, belly pinched in hunger. He waited long for his share of sacrificial food at Bhaktilocana.

Take me now to that sacred grove. I’m hungry, I’m rapture’s offering, I’m his food, he’s mine
to devour.

I can’t eat. Pallor seeps from lips, my skin’s muddy. My mind liquefies. I’m a shameless woman streaming after him. My soul’s colour drains into his sapphire splendour.

Go quick fetch and fasten around my neck his thick garland of dewy dark basil, its drape
weight will revive me.

Lay me at the banyan where Balarama crushed Pralamba to death. Amidst bone shrapnel
I’ll fruit wet and heavy.

He’s triumphant Protector. During the deluge he effortlessly scooped the mountain
to serve as an umbrella for cows and souls. My love torrents fiercer, I’m drowning.

If you seek my survival take me fast to Govardhana, it’s my refuge too.

‘Govinda! Govinda!’ my pet parrot calls from its small cage. As punishment I don’t feed it. It torments me further: ‘He measured the worlds’, it shrieks, expanding my longing for him
who pervades.

Friends, don’t earn the city’s dishonour. Your punishment only pulses my love faster. Release
me from this cage. My bruised wings beat his ecstasy.

I pray: send me swiftly to Dvaraka, his city of expanding light.

Determined to reach the dwellings of her lord
– From the everlastingly celebrated Mathura
To welcoming Dvaraka where he reigns –
Kotai of glossy curled tresses
Of Vishnucuttan , lord of Srivilliputur of shining mansions
Demands her people take her to all the places of her beloved.
Those who chant her sweet garland of verses will
Forever live in his highest heaven Vaikuntha.

Priya Sarukkai Chabria’s books include speculative fiction, cross-genre non-fiction, a novel, two poetry collections and translations of Tamil mystic Andal’s songs. Awarded by the Indian government for Outstanding Contribution to Literature, her work has been translated into six languages. Priya’s work is in anthologies and journals including Asymptote, PEN International, Language for a New Century and more. She edits Poetry at Sangam.

Editor’s note: This excerpt first appeared in ‘Andal: The Autobiography of a Goddess’, edited and translated by Priya Sarukkai Chabria and Ravi Shankar, (Zubaan Books, 2016. It is republished here with kind permission from Zubaan (New Delhi).

“My first and only reader is myself.” Sabyn Javeri, The Missing Slate’s Author of the Month for November, talks to Umamah Wajid.

Dialogue of the Lady Monsters