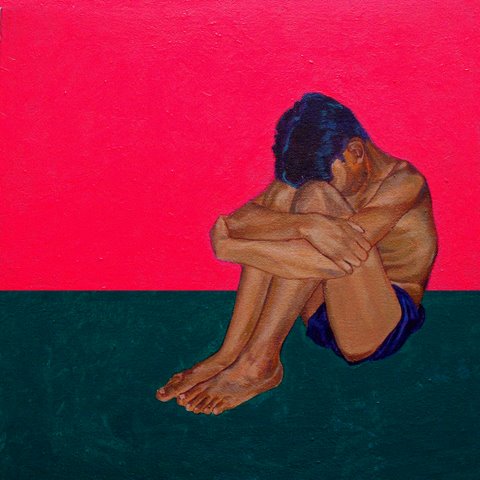 “Like a drowning at a baptism.”
~ Franz Wright, ‘Gone’

Over the phone, I hear myself tell him that I love him.
My poor old brother who once broke his fist
against a wall, unable to hit a bitter woman in the face.
Now a gloriously recovering alcoholic thrown out of jobs
like something dead picked out of a heaving fishnet
and tossed right back into the sea. In short, what
started out as only a man recovering from heartbreak
turned into a hive of empty rum bottles under the bed.

If love is a kind of fugue, as I imagine, then he is
that man gradually growing back his senses
one by one in a foreign town, where one day
he has found himself startled by his own face
rippling against a shop window. Where to, brother?
So when he walks over to the barber’s shop smiling
and asks for some cold water to remember his face,
the man returns to find him studying
the soles of his feet intently.

Stop me if you’ve heard this one. A cautionary tale,
if you will. After the woman he loved married another,
our hero woke up every morning with a little blood
in his mouth. Soon, his roommates complained
when he muttered in his sleep it sounded like death itself.
What do you mean it sounded like death? The less
eloquent one noted it sounded somewhat like a rattling
that comes from a butcher’s bucket where
a decapitated chicken has been thrown and lidded
to bleed. Once he called me, drunk, from another city,
and explained how each time he thought about it,
it felt like a calculated blow in the stomach.
Then one morning he woke up with a creaking jaw.

That was six months ago, and now he insists he’s better.
He says any day now he’ll pay back the money he owes me.
His voice loud, exaggerated, something unspooling
the clenched fist of his heart, finger by cold finger.


They say a lover is a forever shrinking
being. A man after love is a silhouette of a black horse
grazing at dawn, alone and proud, its back quivering
slightly in the breeze.


I ask him if he remembers that cold Christmas night –
the day the tsunami hit the coasts bordering the Indian Ocean.
How he’d smuggled two quarters of Black Mountain
into his room, and we’d sat on the floor drinking
the industrial liquor neat, our warm faces
twitching less and less in the dark.

December 2004,
I’d turned seventeen and I’d just discovered alcohol.
My palate strewn with a heavy fire, I slurred this new word
that sounded more like a prayer than a devastation.
A three-syllabled hymn for the sea and its inclemency.

We saw it on the news the next morning as it crashed
onto a second-floor balcony of a sea-side resort.
How a man dangling off the ledge, watching
the thing approach, let himself fall in the swirl below,
just in time as the grey wall loomed in.


What they did not show on TV was the darkening
face of a man encountering the dignified horror
of drowning. That one cruel resurfacing of the head
before the final immersion, where for a moment
as he went under, he might’ve thought he’d make it
back to the shore somehow.

Rohan Chhetri is a Nepali-Indian poet. He is the winner of The Great Indian Poetry Collective’s ‘Emerging Poets Prize 2015’, RædLeaf Poetry India Award 2013, and the TFA Award 2014 for his poems. He was a Toto-Sangam Fellow at the Sangam House International Residency (2014-15) and is currently pursuing his MFA in Creative Writing Program at Syracuse University.

In the first part of a series on the Vietnam war in cinema, Michael Dodd traces the early history of this now instantly identifiable sub-genre.

"Mist soars on the river, my door splits free of its hinges:/ My children’s children, and those I will never...