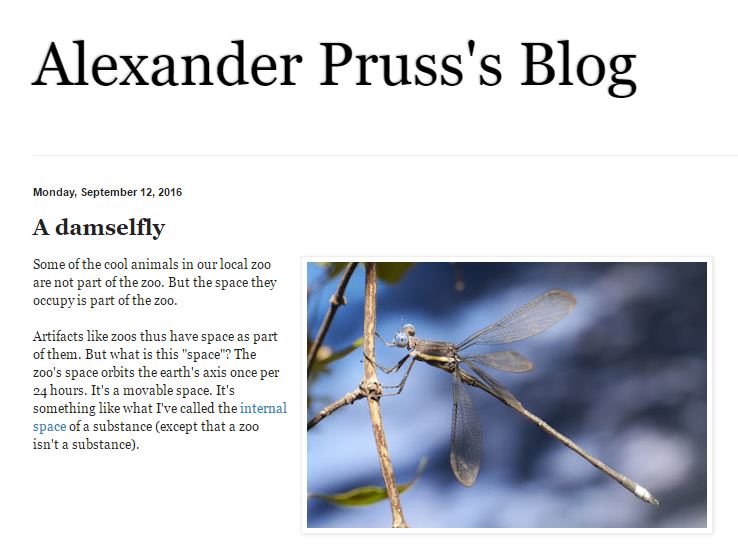 Usually when you follow a writer or blogger for a year or two you construct a mental image of what they must be like in real life — how they look and dress, where you might encounter them, what they might say. With Alexander Pruss I have absolutely no idea.

I came to his blog thinking him to be an unusually rigorous analytic philosopher. Then I found that he was more of a Christian theologian. Then I started to read his posts on coding, which belong on the front page of Hacker News.

First, here is Pruss in his workday persona, grappling with the philosophy of evil from a Christian point of view:

“The following argument is valid:

Of the three premises, (3) is clearly true. If physicalism is true, a gravely wicked character is simply a function of the arrangement of matter, and particles in the brain of a good person could just randomly quantum tunnel into positions that constitute a gravely wicked character. That leaves premises (1) and (2). I am pretty confident of (1). And (2) has a certain plausibility to it.”

And then, here is Pruss when he gets home, throwing off the academic gown and hunkering down in the basement with an Arduino and a soldering iron:

“For quite some time, my older daughter has wanted me to make her Great Wolf Lodge Magiquest wand do something at home. So I made a simple IRToWebThingy. It takes infrared signals in many different infrared remote controls and makes them available over WiFi. As a result, we can now watch Netflix with a laptop and a projector and the ceiling and play/pause with the Magiquest wand (and adjust volume with our DVD remote) with a pretty simple python script. My son (with some help) made a 3D etch-a-sketch script that lets him draw in Minecraft with the DVD remote. I made a fun script that lets you fly a pig in Minecraft with a Syma S107 helicopter remote. You can even control rooted Android devices with IR remotes and shell scripts.”

Which do you prefer? The philosophy or the alpha-geek-dad? I will take both. One day, minds like this will rule the world.

Michael Dodd writes on Alejandro González Iñárritu’s ‘Birdman’, “a wry look at modern celebrity and the struggle to keep up with an ever-changing digital and fame-obsessed world”.

"Following every international or domestic terrorism act committed by a Muslim, the American-Muslim community divides under pressure..." Sharmin Sadequee investigates...