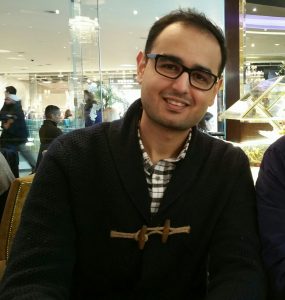 Awais Khan is a graduate of the University of Western Ontario and Durham University. He has taken several Creative Writing courses at the Faber and Faber Offices in London, and is currently editing his first novel with an editor in London. He lives in Lahore, Pakistan. In the latest installment of our Author of the Month series, he talks to Ebony E. Chinn about the invaluable support group that comes with studying writing in an academic setting, how past trauma informed his present work, and the wonderful beauty of writing retreats.

As someone who has taken several Faber & Faber courses (how many?), how has that influenced your approach to writing? Also, which writers did you study under?

I’ve taken two Faber & Faber courses: the 6-month Novel Writing course and the 3-month Novel Editing course. Faber has really helped me hone my skills as a writer and embrace my style of writing. It helped me overcome my fear of rejection by encouraging me to present my work to my peers for feedback. In many ways, that is perhaps the best thing about these courses, the opportunity to make friends who provide honest and critical feedback on your writing. That, more than anything else, pushed me to write during those dark days when finding inspiration would be like searching for water in a desert. Most of what I’ve written today, I owe to my wonderful Faber support group. We’ve remained friends ever since.

I was given the opportunity to work under Helen Francis, a seasoned Editor and accomplished Literary Scout who helped me focus my energy in the right direction. In addition to plot and pacing, she was invaluable in explaining character and voice. Sam Copeland, a Literary Agent at Rogers, Coleridge and White, who in addition to taking several classes also had a one-on-one meeting with each student to explore their novel’s potential. He even suggested the best agents to submit to.

Your story, ‘Stark White’, reminds me of ‘Gravity’ by David Leavitt in which an ill protagonist makes a choice between refusing treatment that can extend their life, but not enhance it—only for them to find strength that was thought to be lost. Why do you have Samarra refuse treatment only for her to feel foolish in the end?

There is a certain stigma attached to the word ‘cancer’. Many people believe it to be a death sentence and while that may be an honest assessment in some cases, mostly it’s just the word itself that does half the damage to the person. In that event, the possibility of a cure sometimes feels like a futile hope and people simply refuse to allow chemotherapy with its accompanying disadvantages to bog them down. Later, once that slim chance of recovery has been snatched away, there comes this deluge of regret like a dark wave of depression. Samarra suffered from something similar. In order to save herself from hair loss, she made the ultimate mistake of leaving the cancer untreated. No matter how successful a surgery might be, chemotherapy is almost always needed for aggressive cancers. I think that Samarra bitterly regretted that decision and took her rage out on the only person she could — her husband.

Why do you have Samarra laugh like a villain rather than self-pity?

Samarra is at that stage of her life where she realizes that she’s not going to survive. Many people wouldn’t believe it, but people with cancer don’t always want to be treated like they’re fragile china. I believe that was Samarra’s way of showing that she was still there — still alive and not beneath holding grudges and contempt.

Most of all, my intention was to capture Samarra’s anger, and I believe that whenever she regained consciousness, the anger that would always be simmering under the surface would just burst forth.
Your use of time and place is interesting. What made you decide to present the story with Samarra drifting in and out of consciousness?

Cancer is something that most of us have had the misfortune of witnessing firsthand. Having lost someone close to me to cancer, I wanted Samarra’s voice to stand out. The technique of her drifting in and out of consciousness was to heighten the effect of her lucid moments, when her agony and bitterness dominate the entire scene, the way she pushes against her husband in the hospital when she sees him taking pity on her. While I can only imagine the inner turmoil of a person in such a state, I did my best to bring it forth, the way she fought against her husband’s love and yearned for it at the same time. Most of all, my intention was to capture Samarra’s anger, and I believe that whenever she regained consciousness, the anger that would always be simmering under the surface would just burst forth.

How come you don’t give Samarra’s husband a name? Does it reflect the lack of intimacy in Samarra’s marriage?

Yes and no.
Yes, because it is evident at this stage of the disease that Samarra is finding it hard to be close to her husband. While her husband might not have been cheating on her, her insecurity drives her to believe the worst in him, and in the increasing contempt in which she starts to hold her husband, addressing him by name would just be too much for her. She wants to protect herself against heartbreak and the threatening possibility of him marrying again after her death. She wants to distance herself from that man, and what better way to do that than not think of his name at all?

I also answered no, because to some extent, I wanted the story to be only about Samarra. While her husband is a major part of the story, giving him a name would have broken the image of him with his infinite faults in Samarra’s mind. The story is about Samarra and I didn’t want anything to taint the way she views and understands the world. Except for her son, everything has assumed a secondary importance to her.

Who or what are some of your inspirations for writing?

I’ve been an avid reader since childhood and while I’d definitely say that the classics have for the most part inspired me to write, I think I owe my style of writing to modern writers too.

Leo Tolstoy’s ‘Anna Karenina’ has had an enduring effect on me, and time and again, I’ve found myself returning to this delightful tale of love and betrayal, both to admire the writing snd shame myself into writing better. I’m also a huge fan of Donna Tartt’s ‘Secret History’ and I find myself dreaming about writing like her someday.

Also, whatever they say about writing retreats is absolutely true. I discovered that I got a lot more work done in London, away from everyone, ensconced in a world of coffee and journals. That’s more than I ever achieved in Lahore where devoting huge chunks of time to writing is just not possible.

Writing can be a lonely business, but if you have friends who write too, well that changes the picture completely. A lot of my inspiration comes from my friends who tirelessly bring forth novel after novel and I just can’t help but try to emulate at least their sense of routine and dedication, if not the staggering amount of words they write everyday.

“He could be sentimental, yet in the same breath a ruthless cynic; an idealist with little patience for impractical dreams…” Story of the Week (December 18), by Zino Asalor.

All My Favored Cousins

"I look at the empty cage, the rows, hear the hissing…the whole damn mess of this place, and I realize...