Dalton, a boy estranged from his family, has made a new family in a gang of boys who convene under a Kuka tree. The tree is a shelter from rules, from the discomfort of not knowing where their next meal will come from, and from the political confusion that surrounds their town. Banda, the most revered of all in the group, is the biggest and strongest. He has killed and he also supplies the coveted wee wee drug. Banda represents the father that Dalton does not have. He is a protector and guide and introduces Dalton, our protagonist, to his first dose of wee wee. 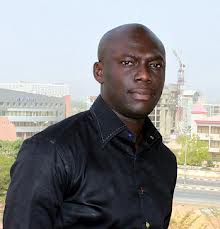 ‘A story with heart’: Elnathan John

Interestingly, even though Dalton is the smallest of the group, he is also the most powerful because he carries the narrative of the story. In the boys’ world, losing dignity and face is much worse than losing one’s parents. We see that from the fights that ensue from cussing and abusing one’s family name. Gindin mama ka! Which means, Your mother’s cunt, is one of the insults that Gibedanisa uses on Banda and as a result he is punched very hard in the nose. The boys can stomach a beating but not an insult. Banda’s physical strength is tested though towards the end of the story, after his bouts of coughing and shaking which make him seriously ill and eventually lead to his demise.

Everything is also governed by Allah’s will. If, in a brawl, someone dies then it is Allah’s will. This ability to distance themselves from the deed is quite remarkable, more so because Allah again is a figure of authority and a surrogate for their absent fathers. In Bayan Layi, political strife is at its peak. The Big Party and the Small Party are using all their resources and wit to win the elections. Banda’s cunning comes in handy during such times and he is deployed by The Small party to pin posters and stir up political fervour amongst the common peoples of Bayan Layi. His gang members are only too pleased when Banda delegates tasks to them, because money exchanges hands and that represents a meal and some wee wee.

It is a huge shame that many readers have dismissed Bayan Layi as poverty porn. They are dismissing themselves and the many layers that comprise Africa…
On Election Day, after it is discovered that the Big Party rigged the elections, Banda and his boys are hired to destroy all property of the opposing party and wreak havoc. During the destruction at night, the boys burn down the buildings belonging to the Big Party, which escalates into lynching and burning the old security guard whom they have all known. When the police are called in to quell the disorder, the boys escape into the darkness, but Banda, the strongest of them all, cannot outrun the authorities because of his severe coughing, which is a symptom of other illnesses. He is killed in the pursuit. Dalton, after witnessing this and the burning of the town, realizes that his own sense of identity has burnt down and the story ends with him fleeing. He flees past the town and past the Kuka Tree. At that point, the Kuka tree can’t help him and neither can the gang.

I have tried to understand why several readers have dismissed this as an African story for a Western audience. It is not. It is a story for me as well, and I come from Uganda. It is a story that has opened up my mind to how influential politics is in everyone’s lives because a change of leadership represents a change in education, health and other important social sectors. Bayan Layi illustrates how simple routines in a small town contribute to the bigger picture and Nigeria, however large and populous, depends on small acts that shape its overall makeup.

It is never easy to write in the voice of a child, especially one like Dalton who carries so much weight. His powers of perception are obviously limited and we feel an urge to dismiss it because he’s a child. It is either his difficult childhood that makes him rather mechanical, or the intrusion of the author. There is a lot of action, which is important, but I feel there is a limited amount of emotion.

I could easily imagine myself reading Bayan Layi to a group of children to help them learn alternative histories of important places in Nigeria — the secret histories which ripple across so many other countries.

“…no trace of anxiety on her face, though she/ must know the odds against him, the small chance/ of acceptance, the endless cost of otherness…” Poem of the Week (November 5), by Aseem Kaul.

Terminator: Attack of the Drone

Mohsin Hamid’s haunting and vivid story merges reality and science fiction, narrating the struggles of a few survivors hunted by...