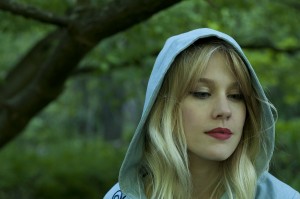 Kira May. Photo by Olga Lipnitski

Kira May is a Toronto-based musician and visual artist whose music explores the possibilities of using voice as an instrument in its own right. Melodic, rhythmic, and textural elements are explored in layers, creating thick and expressive soundscapes. Here, The Missing Slate’s Mavra Bari talks to her about what sets looping apart in the music scene and makes it such a fixture in Toronto’s urban landscape.

I first saw Kira May live in Toronto during one of The Drake’s historical Elvis Monday nights.  The venue was packed, the audience bustling, but as soon as Kira’s haunting and sultry voice filled the air, there was an attentive, almost reverent, silence. Watching this diminutive and pretty young lady mesmerize Elvis Monday’s notoriously hard-to-please crowd was proof enough that this girl was something special. Kira’s body was in constant motion—bending, swaying, stepping—with her hands adroitly working on mic, sound machines, and cords. The finesse and grace of her performance reminded me of one modern yet oft-forgotten aspect of underground music – looping. Music legends such as Frank Zappa, Imogen Heap, and Björk have used the technique extensively, but a new breed of musicians which includes Kira May is taking looping to a more sophisticated level, turning it into an individualized and liberated form of expression.

That being said, vocal and music looping still isn’t as prevalent as one might imagine, especially outside North America. It was something I didn’t realize until my British friend expressed bafflement at the show: “What is she doing?” He was completely dumbfounded when I explained the process to him, and though he had been to live music shows around the world, he had never seen a music act comprised predominantly of loops. Sure enough, on asking musician friends and connoisseurs around the world about the music looping phenomenon, I found that only a handful were well-versed in it.

As an avid live-show goer in Toronto, I had come across many breathtaking loop artists such as Armen Bazarian and Delta Will, and the experience of seeing such a solo act is extremely different from seeing a cohesive band’s performance. The connection between the artist and the audience is closer somehow, more profound. There is a pronounced vulnerability that the musician exudes on stage, as energy is not diffused among members but concentrated to a single entity. Moreover, a deep interaction takes place between the artist and his/her mechanical instrument; the human and the machine are inextricable, which makes the performance all the more curious and engaging.

Kira May offered some first-hand insights as to why and how this is so.

Kira, first off, tell us a little about yourself. Where are you from, and how did you find your way to becoming a Toronto-based musician and visual artist?

Kira: I’m originally from Scarborough, a suburb of Toronto. I remember as a child being so drawn to the city, and so interested in the music there. As soon as I found music that spoke to me, it became a huge part of my life.

I’ve been a bedroom singer and songwriter since those early days of falling in love with music. I have a very shy side to my personality and only recently found the courage within myself to sing and create publicly, but it was a huge struggle. Painting, on the other hand, came to me very naturally and served my need to exercise creativity in the solace of my own private space. I have a deep love for visual art, and studied painting in school. I am grateful for that experience because it allows me to think about music in visual terms, which lends itself well to my process.

Your music is described as “experimental vocal pop” on several forums. Can you elaborate what that means?

My songs are almost exclusively made up of vocal layers. The compositions are generally pretty lush and full, andthe idea behind the project is that most, if not all, elements of the songs are generated by my voice, which is looped and manipulated by a variety of effects. I would call the music experimental because it is driven by exploration and curiosity, and sometimes falls outside of standard pop conventions. But, at the same time, the songs often follow familiar, relatable structures.

There is an array of diverse musical talent in Toronto, but looping artists are really novel and self-contained. What are the benefits and setbacks of being a one-woman show on stage?

I was drawn to looping out of necessity because I was too scared to collaborate with other musicians. The rise of looping was a godsend because it allowed me to create songs on my own without compromising the sound that I wanted. Once I started playing with looping technology I really fell in love with it. I have been a fan of minimalist music for a very long time. I adore Arvo Part, Steve Reich, Philip Glass, Nico Muhly and Dan Deacon (who, in my mind, addresses minimalism in a very contemporary way). I love repetitive music with gradual changes that build in intensity because it really allows you to get inside the mood of the music. This approach to music feels so natural to me—I respond so deeply to it. The process of looping lends itself extremely well to this repetitive and layered song-building that really moves me.

There are many benefits to being in control of the sounds, but the major setback would be that a machine can never deliver the energy and presence of a person. Fortunately for me, Toronto troubadour/music-magician Charles Tilden has joined my live show and adds his own spirit to the songs.

Has something ever gone terribly wrong during a show?

Ha-ha! Oh yes. Unfortunately that is the nature of the looping beast. During the Health EP release show in Toronto, we were playing the very last song, which was going to be very large and dense—the grand finale of the performance, so to speak. Somehow a cord knocked a dial on my looper and every layer I had built was wiped out. I thought, we can’t end the show like this! I decided to build it up again and finish the song properly. It could have been disastrous, but I felt like the crowd was with me. And I like to think that the unplanned moments add a sense of humanity to the performance. The good news about unplanned disasters is that you surprise yourself with your ability to handle them in the moment. And when the worst thing happens, you learn that it’s not really that bad, and you become fearless about future performances because you know the worst thing has already happened and you made it work!

Private Theatre: Under the Skin

In anticipation of its upcoming DVD release, film critic Ben Hynes delves deeper into the allegorical implications of Jonathan Glazer’s...