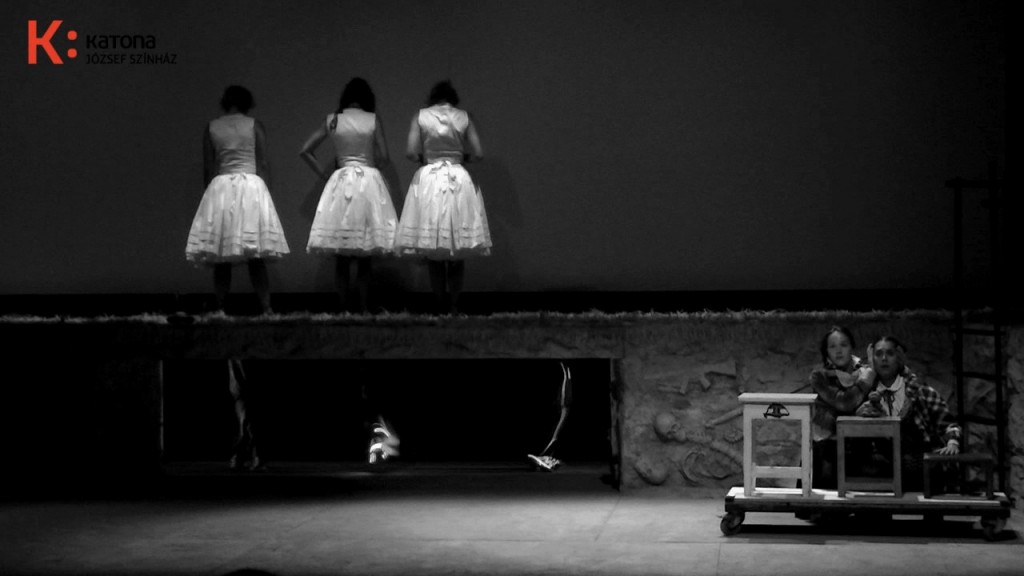 The second half of the play describes the judicial process. Although it seems that the perpetrators were convicted, unlike the killers of Borbély’s mother, the mechanisms of the trial are morally bankrupt, and utterly unable to bring any genuine catharsis or closure: “Fate can hardly be avoided. And the law does not examine Fate. Only deeds.” The accused are duly brought before the judges, but the deep ethical truth of what happened, the confrontation of which would represent the only hope for genuine healing and reconciliation, is what never occurs.

Olaszliszka itself ends with the younger daughter reciting Borbély’s re-interpretation of the nursery rhyme ‘Chod gadja’: originally composed in a mixture of Aramaic and Hebrew, it is a chain rhyme depicting a cycle of deaths: a billy goat is eaten by a cat, who is eaten by a dog, and so on: the rhyme culminates with the Lord smiting down the Angel of Death, who killed the butcher. Borbély’s haunting rendering, at the moment when the Lord steps into the chain of killing, reads:

And now in silence, quietness
the Lord our God is finally present
It is He, no other being,
pure light and illumination,
the angel of death knows his fate
for him only death awaits
the butcher’s killer, it was he
and now he must repent his deed.

It is in moments like these—similar to Borbély’s evocation of the Sabbath Queen in his poem ‘Zemirot’—that he truly shows himself as the legitimate heir to the great Hungarian poet János Pilinszky, unafraid to confront the deepest moral questions of the 20th century and its many killing fields.

Perhaps even more than Pilinszky, Szilárd Borbély’s life was marked by remembrance and sacrifice. His masterwork, the cycle of poems ‘Death’s Glory’, (Halotti pompa, 2004, 2nd. ed. 2006, both Kalligram), commemorates the unspeakably brutal murder of his beloved mother Ilona, on the night before Christmas Eve 2000, through the prisms of the two great defining mythologies of the western world: Judeo-Christian and Greek. Here, he examines the martyrdom of Jesus as sacrifice, the brutality of the “pagan” sacrifices of Greco-Roman deities, and finally, the mass sacrifice of the Hungarian Jewry of his own native Szátmar county. As one reads through the volume, the threads between these different, yet interconnected narratives multiply. Behind each is a theology, embellished by legend and myth.

As may already be known, Borbély took his own life on February 19, 2014. Suicide must always remain a mystery, and it would be wildly inappropriate, not to mention inaccurate, to speculate on reasons. What is important in the context of the theatrical production of ‘Olaszliszka’ is that the director, Gábor Maté, does not proceed as if the two events—the murder of Borbély’s mother and his death by his own hand—did not happen. He does not present the play ‘Olaszliszka’ as an isolated theatrical event—which, given its source in a real murder, could perhaps never even be a feasible possibility.

The play is framed with passages from a piece Borbély published in 2010, ‘The Secondary Threads of a Crime’. In this essay (published in English in the Hungarian Quarterly), Borbély discusses the circumstances of Ilona’s murder and the subsequent botched police investigation—the suspects were all released on a technical glitch—as well as its deepening trauma in his life. There is no arc toward redemptive messages of hope and healing, rather a series of brutally honest acknowledgements: “Deep depression is truly similar to death, only that one has become buried in one’s own body,” he writes.

It would be wrong to speak of catharsis. But, sitting in the József Katona Theatre, I felt that Gábor Maté’s stage production of ‘Olaszliszka’ had embraced a series of wider truths…
With these first quotations from Borbély’s essay, and the first citations from his cycle ‘Death’s Glory’, the audience is put on notice that the referential range of the theatrical work in production is going to be wider than even the tragic lynching that took place in Olaszliszka in 2006.  ‘Death’s Glory’ was an act of private mourning made public, drawing extensively upon the public and performative aspects of Baroque Catholic religious folk poetry, Greek mythology, and Hassidic legends. In writing and publishing ‘Olaszliszka’, Borbély created a potential space of public mourning—a deeply Baroque gesture to be sure—where the ethical collapse of present-day Hungary (and to a certain degree, European society as a whole) could be explored.

The actor, Ernő Fekete, who plays the schoolteacher murdered in Olaszliszka, also speaks Borbély’s words describing Ilona’s death and its aftermath. A clear parallel is drawn. At the end of the play, Borbély states:

When I see someone coming toward me, I don’t ask myself who he is and what he’s doing, but rather: is this the person who will bring my death?

In time, the earth would receive Borbély’s body too, just as it received his mother’s, just as it received the bodies of the tzaddiks who lived in Szátmar County before the mass deportations of 1944. The play ends with Borbély’s decision to consign his own body to the earth, the marsh-ridden soil of north-eastern Hungary containing the bones of the ancestors.

It would be wrong to speak of catharsis. But, sitting in the József Katona Theatre, I felt that Gábor Maté’s stage production of ‘Olaszliszka’ had embraced a series of wider truths, enacting them in a public space in such a manner so as to allow for the potentiality of catharsis, perhaps in a future time less troubled than our own. Gábor Maté’s production of ‘Olaszliszka’ reaches back to the very roots of Western theatrical tradition to depict a very modern tragedy.

“…Now they peer into the darkness/ and sort out right from that which wronged you./ They find an offender…” Poem of the Week (June 1), by Adham Smart.